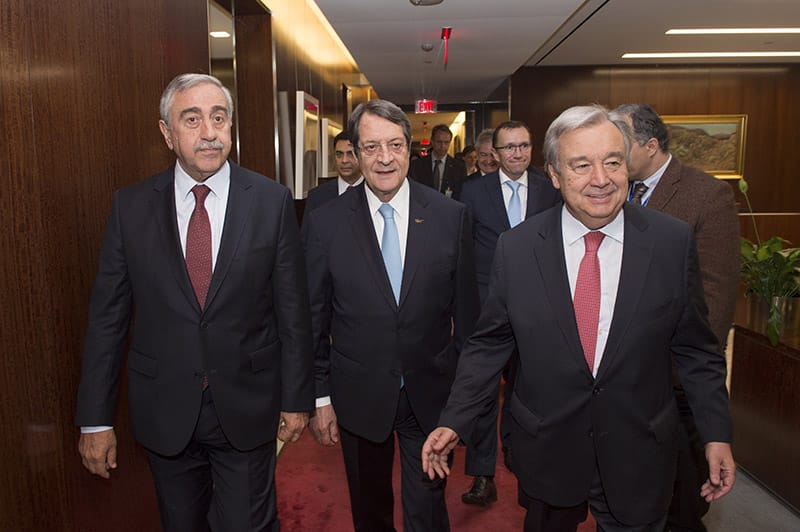 Discussion of the chapter of security and guarantees will seek to create convergences on the issue, which has been left largely untouched in the UN-sponsored peace talks so far, UN special adviser Espen Barth Eide said on Monday as he fleshed out details of how the Geneva conference on Cyprus would be reconvened later this month.

If and when progress on all issues is roughly on par, negotiations can proceed in the final phase on all outstanding issues interdependently, he told a press conference at the UN’s New York headquarters.

After meeting President Nicos Anastasiades and Turkish Cypriot leader Mustafa Akinci in New York on Sunday,the UN Secretary-General Antonio Guterres announced that the Geneva conference on Cyprus will be reconvened “probably in the latter part” of June.

The Geneva conference, which brought together the Republic of Cyprus’ guarantor powers – the United Kingdom, Turkey, and Greece – as well as the two sides on the island and the European Union under the status of observer, first met on January 12.

It produced agreement on a second phase – “deputy-level” talks – which sought to outline the basic positions of each side on the issue of security and guarantee arrangements in a reunified Cyprus.

On resuming the conference, widely seen as a final push toward a comprehensive solution, Anastasiades insisted that all sides – effectively pointing at Turkey – commit to progress on security and guarantees before moving on to close the other chapters.

Akinci countered that, according to the joint statement of the Greek and Turkish Cypriot leaders on February 11, 2014, all issues were to be discussed interdependently and not in isolation.

“I would say the two leaders have a reasonably good outline of where each of the five chapters already discussed will end up,” Eide said.

“The chapter that has been least developed is security and guarantees. The idea now is that we need to give a certain emphasis on this chapter because, in order to be able to see across all chapters in the final, final phase, we need to put some more meat on the bone in this chapter, as well.”

The question of whether Anastasiades’ demand for “substantial progress” on security and guarantees before moving on to closing off the rest of the chapters had been met was left unanswered in Guterres’ statement on Sunday.

“Progress in this chapter is an essential element in reaching an overall agreement,” the UN chief had said, prompting the perennial ‘concessions’ criticism for the president by domestic opposition.

The UN adviser added that he was entrusted by Sunday’s meeting between Guterres and the two leaders with “reaching out and continuing a dialogue with all participants of the conference on the issue of creating a common document which will be the basis for discussion on security and guarantees”.

Clarifying that the issue of hydrocarbons was not discussed during the four-hour meeting – “other than a brief mention” – Eide said that the 1960 treaties of guarantee and alliance between Cyprus, on the one hand, and its guarantors, on the other, must be replaced with a “common security vision for Cyprus for the 21st century, not so much building on the 1960 realities, but more on the 2017 realities”.

In his first remarks after the agreement was announced, Akinci said it “injected common sense and logic” into the ongoing talks.

The Turkish Cypriot leader had accused Anastasiades of disrupting the talks by setting “persistent preconditions”.