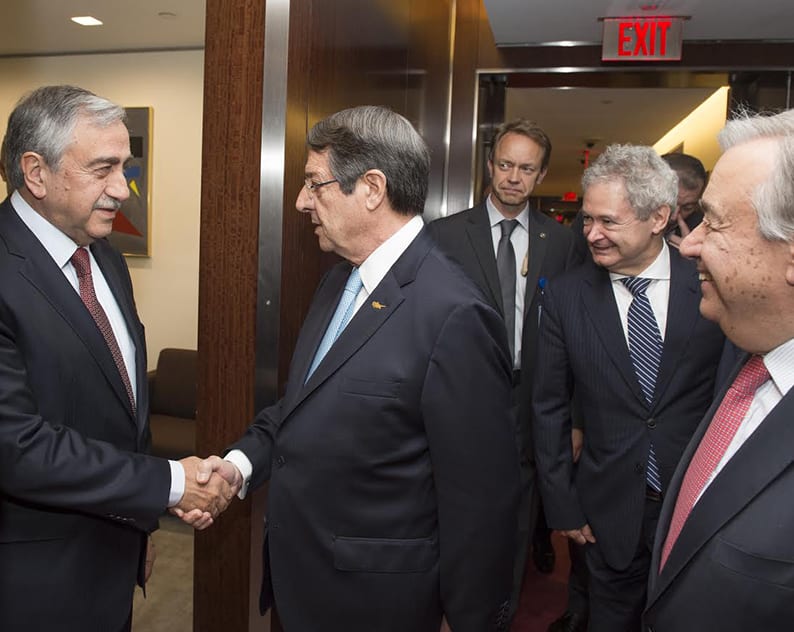 Turkey has accused the Greek Cypriot side of distorting statements by UN Secretary-General Antonio Guterres “before the ink is even dry”.

In a statement issued on Tuesday night, the Turkish foreign ministry said the Secretary-General’s remarks reflected the understanding that there was a need to reconvene the Conference on Cyprus in the month of June without any preconditions.

“In fact, particular emphasis is laid in the Secretary-General’s remarks on the principles that all issues will be discussed interdependently and that “nothing is agreed until everything is agreed, through a direct reference to the leaders’ Joint Declaration of 11 February 2014,”it said.

It said that the contents of these remarks, which conveyed to the public the agreement reached during the meeting of the leaders with the UN Secretary-General, had been distorted and misinterpreted by the Greek Cypriot side so as to serve their domestic policy interests, only reinforced doubts regarding the intention of the Greek Cypriots to establish a new partnership with the Turkish Cypriots on the basis of political equality.

“If the aim of reconvening the Conference on Cyprus is to make use of this final opportunity to reach a comprehensive settlement and successfully conclude the negotiation process that has been continuing on the Island for over two years, then all the participants need to adopt the constructive attitude that Turkey and the Turkish Cypriot side are displaying, reflecting a sincere will for a settlement,” it added.

The foreign ministry said Turkey was ready for the reconvening of the Conference on Cyprus and was determined to reach a just, lasting and comprehensive solution to the Cyprus issue.

The comments by the UN Secretary-General following his meeting in New York on  June 4 with the leaders was a step towards the conclusion of the process, it said.

The Greek Cypriot side has said that it was President Nicos Anastasiades’ initiative and the proposals he put forward that were the reason Guterres called the meeting on Sunday and that the sequence in which the negotiating chapters were mentioned, beginning with security and moving on to territory, property and governance and power sharing was important as this was what the president’s proposal was all about.

Guterres statement on Sunday said: “All agreed that the chapter on security and guarantees is of vital importance to the two communities. Progress in this chapter is an essential element in reaching an overall agreement and in building trust between the two communities in relation to their future security.”

“The leaders and the Secretary-General agreed that all issues will be negotiated interdependently and that nothing is agreed till everything is agreed, as per the joint declaration of 11 February 2014. The leaders agreed to continue in parallel the bi-communal negotiations in Geneva on all other outstanding issues, starting with territory, property and governance and power-sharing,” it added.

Special Adviser Espen Barth Eide is to engage with all participants in the preparation of a common document to guide the discussions on security and guarantees, based on the outcome of the meetings of the conference on Cyprus in Geneva and Mont Pelerin, Guterres said.