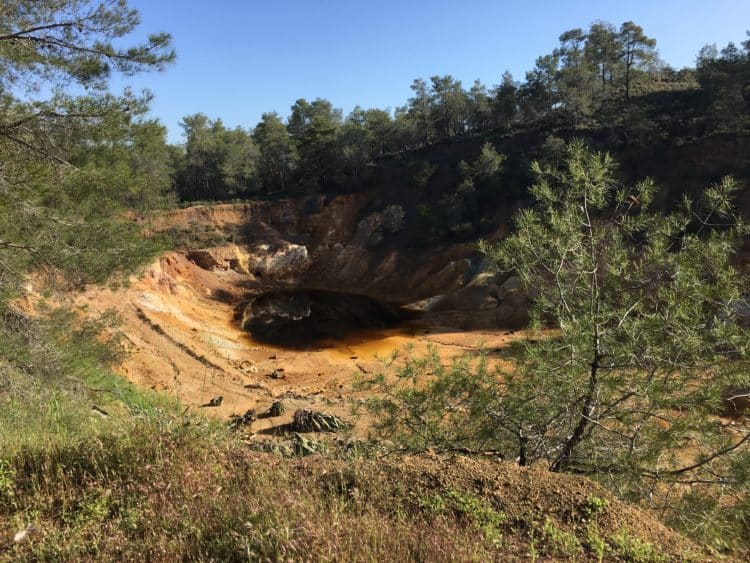 The mine at Mathiatis dates back to 600 BC

Residents of Mathiatis in Nicosia warned on Tuesday that exploiting the area’s mine to extract gold would have a negative impact on the flora, fauna and the archaeological significance of the site.

The community council earlier in the year gave Hellenic Copper Mines (HCM) the green light to exploit the mine on the eastern foothills of the Troodos following a referendum among the community’s residents, where 62 per cent voted in favour.

Mathiatis’ community leader, Theodoros Tsatsos, had said then that the mining company would be allowed to proceed only if it met a number of conditions set by the council including restoration of the area, to protect any antiquities found, and to preserve nature.

But residents objecting to the move dismiss HCM’s assessments and those of the expert the community council had hired to carry out a study on the impact of the mining activities, as misleading.

“What will be left of the archaeological and cultural value of the site when the galleries in the crater disappear and with them the ancient remains on site that are not excavated?” the group asked in an announcement on Tuesday.

“How is it possible in a country that is in danger of desertification and has drawn up a national strategy on climate change, to root out 2,000 pines and destroy protected habitats to serve private interests?”

The group said that visitors to the mine can see with their own eyes there has been “a natural restoration with low vegetation and pine trees” since it was last exploited in the 1940s.

The announcement accuses HCM of lying when it said it would only carry out works in an area of around 3,500 square metres, as the maps the company has drawn of the mine indicate that the works will cover 27,000 m2.

It added that no proper environmental assessment of the mine has been carried out by the company.

The group also said that the report of the expert the community council hired, Antonis Charalambides, failed to mention that the mine has attracted great attention from university/research teams, and that “a significant number of archaeological data such as ancient galleries but also their relationship with the geology of the site will be destroyed by the ‘small’ expansion of the crater”.

Nature, the group said, “has already restored to a great extend the wound created by previous exploitations”, and that this procedure could be speeded up with tree planting and earthworks.

Back in April, Tsatos had said that the conditions the council set included paving some two kilometres of roads to create a bypass for heavy vehicles and to minimise dust from traffic and to observe the timeframe of 25 months for the transportation of debris and gold mining. The company was also told it had to remain within the boundaries of the mine and not expand it even if new deposits are found, to continuously measure dust levels, to protect any antiquities found and only cut down trees where absolutely necessary and under the supervision of the forestry department.

The company also agreed, according to Tsatos, to restore the mine, which is an archaeological site, with a play area, a park, parking, kiosks, benches and pathways leading safely into the crater for visitors.

An old American tradition of reneging on deals