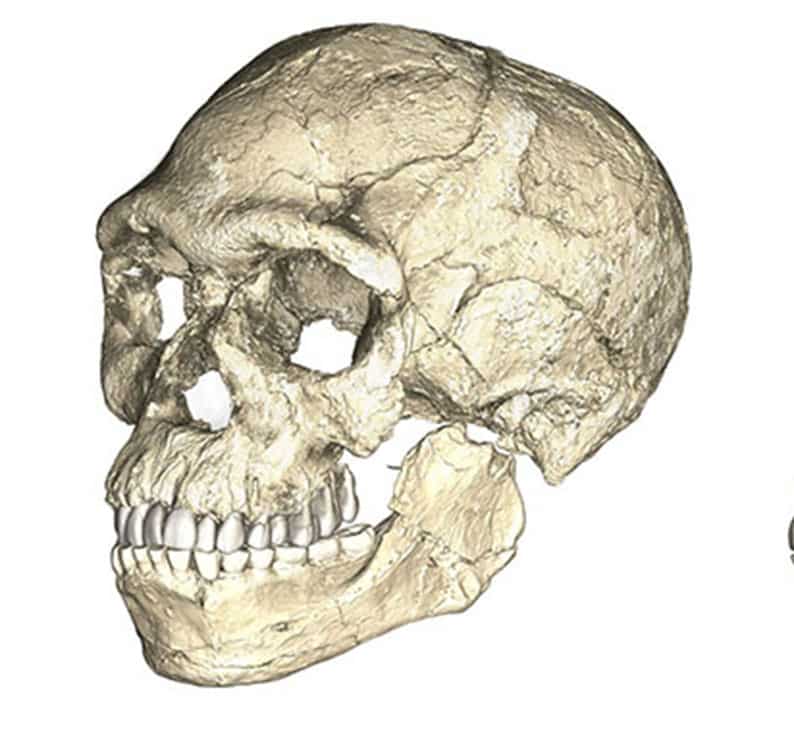 A composite reconstruction of the earliest known Homo sapiens fossils from Jebel Irhoud in Morocco, based on micro computed tomographic scans of multiple original fossils.

The understanding of human origins was turned on its head on Wednesday with the announcement of the discovery of fossils unearthed on a Moroccan hillside that are about 100,000 years older than any other known remains of our species, Homo sapiens.

Scientists determined that skulls, limb bones and teeth representing at least five individuals were about 300,000 years old, a blockbuster discovery in the field of anthropology.

The antiquity of the fossils was startling – a “big wow”, as one of the researchers called it. But their discovery in North Africa, not East or even sub-Saharan Africa, also defied expectations. And the skulls, with faces and teeth matching people today but with archaic and elongated braincases, showed our brain needed more time to evolve its current form.

“This material represents the very root of our species,” said paleoanthropologist Jean-Jacques Hublin of Germany’s Max Planck Institute for Evolutionary Anthropology, who helped lead the research published in the journal Nature.

Before the discovery at the site called Jebel Irhoud, located between Marrakech and Morocco’s Atlantic coast, the oldest Homo sapiens fossils were known from an Ethiopian site called Omo Kibish, dated to 195,000 years ago.

“The message we would like to convey is that our species is much older than we thought and that it did not emerge in an Adamic way in a small ‘Garden of Eden’ somewhere in East Africa. It is a pan-African process and more complex scenario than what has been envisioned so far,” Hublin said.

The Moroccan fossils, found in what was a cave setting, represented three adults, one adolescent and one child roughly age 8, thought to have lived a hunter-gatherer lifestyle.

These were found alongside bones of animals including gazelles and zebras that they hunted, stone tools perhaps used as spearheads and knives, and evidence of extensive fire use.

An analysis of stone flints heated up in the ancient fires let the scientists calculate the age of the adjacent human fossils, Max Planck Institute archaeologist Shannon McPherron said.

There is broad agreement among scientists that Homo sapiens originated in Africa. These findings suggest a complex evolutionary history probably involving the entire continent, with Homo sapiens by 300,000 years ago dispersed all over Africa.

Morocco was an unexpected place for such old fossils considering the location of other early human remains. Based on the shape and age of the Moroccan fossils, the researchers concluded that a mysterious, previously discovered 260,000-year-old partial cranium from Florisbad, South Africa also represented Homo sapiens.

The Jebel Irhoud people had large braincases that lacked the globular shape of those today. Max Planck Institute paleoanthropologist Philipp Gunz said the findings indicate the shape of the face was established early in the history of Homo sapiens, but brain shape, and perhaps brain function, evolved later.

But given their modern-looking face and teeth, Hublin said, these people may have blended in today if they simply wore a hat.

Homo sapiens is now the only human species, but 300,000 years ago it would have shared the planet with several now-extinct cousins in Eurasia – Neanderthals in the west and Denisovans in the east – and others in Africa.

Hublin did not hazard a guess as to how long ago the very first members of our species appeared, but said it could not have been more than 650,000 years ago, when the evolutionary lineage that led to Homo sapiens split from the one that led to the Neanderthals