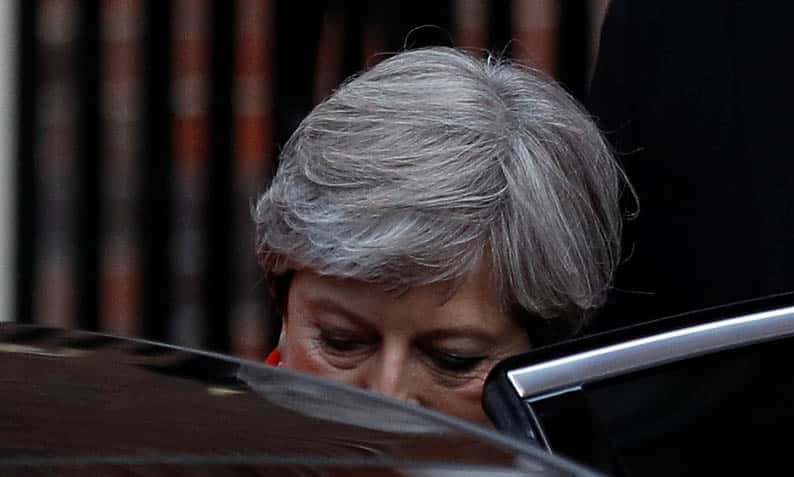 European Union leaders fear Prime Minister Theresa May’s shock loss of her majority in the snap British election will delay Brexit talks due to start this month and raise the risk of negotiations failing.

Guenther Oettinger, the German member of the European Commission, said it was unclear whether negotiations could be launched on June 19, as planned, while a weak British government raised the risk that talks could fail to reach the kind of deal that can limit disruption when Britain leaves in March 2019.

“We need a government that can act,” Oettinger told the Deutschlandfunk radio station. “With a weak negotiating partner, there’s the danger that the negotiations will turn out badly.”

A spokeswoman for the Commission, the EU executive whose Brexit negotiator Michel Barnier has planned to begin talks with May’s government a week on Monday in Brussels, declined comment on whether there would not be a delay. “We are ready,” she said.

French Prime Minister Edouard Philippe was quick to scotch any suggestion that Britain might do a U-turn and ask to stay in the EU – something that would need EU agreement.

Germany’s European affairs minister Michael Roth said time was tight until the expiry of a two-year window to reach a negotiated deal: “We should not waste any time,” he said.

Few Europeans voiced much sympathy for May. Some compared her to her predecessor David Cameron, who sought to silence Eurosceptic fellow Conservatives by calling the referendum on EU membership last June which ended his career and shocked Europe.

“YET ANOTHER OWN GOAL”

“Yet another own goal, after Cameron now May, will make already complex negotiations even more complicated,” tweeted Guy Verhofstadt, the liberal former Belgian premier who is the European Parliament’s point man for the Brexit process.

German conservative Markus Ferber, an EU lawmaker involved in discussions on access to EU markets for Britain’s financial sector, was scathing: “At the most untimely point,” he said, “The British political system is in total disarray. Instead of strong and stable leadership we witness chaos and uncertainty.”

May, who had campaigned against Brexit last year, delivered her terms for withdrawal in March, binding London into a tight, two-year countdown to departure. These terms include a clean break from the EU single market. May then called a snap election hoping for a big majority to strengthen her negotiating hand.

That was also the broadly desired outcome in Brussels, where leaders believed that a stronger May would be better able to cut compromise deals with the EU and resist pressure from hardline pro-Brexit factions in her party which have called for Britain to reject EU terms and, possibly, walk out without a deal.

Elmar Brok, a prominent German conservative member of the EU parliament, said Europeans would be disappointed: “Now no prime minister will have that room for manoeuvre,” he said.

European leaders have largely given up considering the possibility that Britain might change its mind and ask to stay. Most now appear to prefer that the bloc’s second-biggest economy leave smoothly and quickly. Having recovered from last year’s shock, Germany, France and other leading powers see Brexit as a chance to tighten EU integration without the awkward British.

As news of the British confusion broke, Commission President Jean-Claude Juncker, the EU chief executive, was launching a new push for a much expanded EU defence project which Britain has long opposed, fearing a clash with the US-led Nato alliance.

The other 27 governments are particularly concerned that a breakdown in negotiations could lead to Britain ceasing to be a member on March 30, 2019, as laid out in Article 50 of the EU treaty, without negotiating the kind of divorce terms that would avoid a chaotic legal limbo for people and businesses. That would also make it improbable that Britain could secure the rapid free trade agreement it wants with the EU after it leaves.

In a note to clients, UBS wrote that the relative strength of hardline pro-Brexit groups in a weak Conservative government could make a breakdown in talks more likely and make it harder to reach a trade deal: “A tighter political balance could make it easier for Eurosceptics … to prevent the government from offering the compromises needed to secure a trade deal.”

Talk in Britain that a different ruling coalition could seek a “softer” Brexit than May has proposed, possibly seeking to remain in the single market, is also problematic for the EU.

While the 27 would quite possibly be willing to extend to Britain the same kind of access to EU markets that they offer to Norway or Switzerland, they have made clear that would mean Britain continuing to pay into the EU budget and obey EU rules, including on free migration across the bloc, while no longer having any say in how the Union’s policies are set.

“Maybe there won’t be a hard Brexit,” Norwegian Foreign Minister Boerge Brende said. “Maybe Britain will have to show greater flexibility in the negotiations.”

But EU officials question how any British government could persuade voters to accept a Norway-style package and so would be wary of starting down the path of negotiating it for fear of ending up without a deal that both sides could ratify in 2019.

Banks and valuers to iron out differences