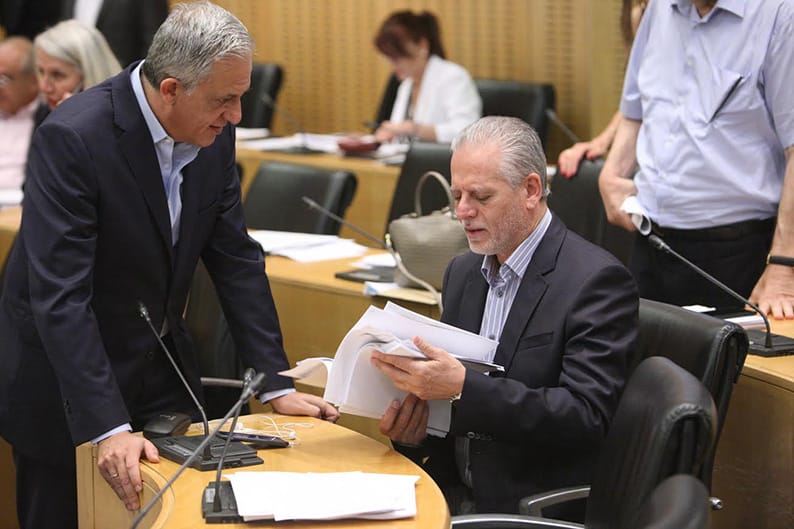 Opposition parties Diko and Edek on Friday dismissed as slander claims that they launched last-minute attempts to wreck the national health scheme (Gesy) and that, on the contrary, it was the last two governments which had stalled reforms.

The two parties came under fire from ruling Disy and main opposition Akel MPs on Thursday who accused their colleagues from Diko and Edek of seeking to torpedo Gesy at the last minute.

The stir was caused after the head of the House health committee, Disy’s Costas Constantinou revealed on Thursday that Diko planned to table an amendment proposing to suspend for three years the autonomy of state hospitals.

This, followed the announcement by Edek leader Marinos Sizopoulos that his party would table an amending legislative proposal, ensuring patients’ right to choose their physician under the new regime.

Constantinou also told state broadcaster CyBC on Friday that Diko and Edek had enlisted the head of the medical association (Cyma) Petros Agathangelou, to persuade Akel, but without any success, to back this as well.

In an announcement, Diko’s parliamentary representative, Christiana Erotokritou on Friday denounced Health Minister Giorgos Pamboridis for attacking political leaders following his comments that a Judas was among them when it came to Gesy.

Parliament last week signed off on three bills that would enable the roll-out of Gesy providing (mandatory) universal healthcare coverage. The bills are scheduled to be voted by parliament on June 16.

Diko’s daggers were also turned against Constantinou, for “slanderous attacks”.

The party said that it had long ago decided to vote the Gesy bills as is.

“Our party had taken the lead in the effort to create Gesy in our country,” it said. It added that they have concerns about the implementation of Gesy and the autonomy of state hospitals and that it is for this reason that Diko will closely monitor its implementation process and intervene to resolve problems that will emerge along the way.

Diko said that the delays in voting the three bills were due to “systematic attempts” of health ministry officials and Disy members to obstruct the process.

“That is where Mr Pamporidis has to look for those responsible, not in the New Testament”.

Diko chief Nicolas Papadopoulos, speaking to Active Radio on Friday said that this was an election ploy of Disy and Akel to blame Diko for the non-implementation of Gesy.

He added that Pamboridis told him during a telephone conversation they had, who he was referring to as Judas. The minister, he said, named another political leader.

But Pamporidis, according to the radio station, said that the last time he spoke with Papadopoulos was last month, at the Pride Parade, and it was just to say hello.

In his turn, Sizopoulos, speaking to CyBC, called Constantinou “a cheap slanderer,” as to the latter’s claims that Diko and Edek are scheming to scupper Gesy.

“Regardless of our disagreements with provisions of the two bills, Edek will vote them,” Sizopoulos said in an announcement.

He added that what took place the past 24 hours was “unnecessary and excessive” and was that this “so-called cooperation with Nicolas Papadopoulos for the three-year postponement of hospital autonomy is fictitious and slandering”.

Regardless of any disagreements as to the bills, he said, Edek will back them because Gesy is his party’s “political child and will not give it up for anyone else to adopt”. He added that it was on his insistence, with numerous letters to Anastasiades, that discussion on Gesy among parties had begun.

Some, he said, “shed crocodile tears for Gesy” despite that they bear responsibilities.

“The Akel government had put Gesy on hold for five years. Today’s government has had monumental regressions in its positions,” Sizopoulos said.

“This government cannot even if it wants to, to implement Gesy,” he said, as it has done nothing the past four and a half years to improve the rapidly deteriorating situation in state hospitals, there are still serious medical staff shortages, while shortages in medicines and supplies were alarming.

Agathangelou dismissed any claims that he and Cyma had any involvement in any scheming against Gesy.

Cyma, he said, “had visited all parties with transparency” during its campaign to make its positions on the Gesy known.

He added however, that when the bills are voted by parliament, Cyma would begin a dialogue with the Health Insurance Organisation as to protocols and doctors’ fees.

Playing with dragons in Paphos, oh my