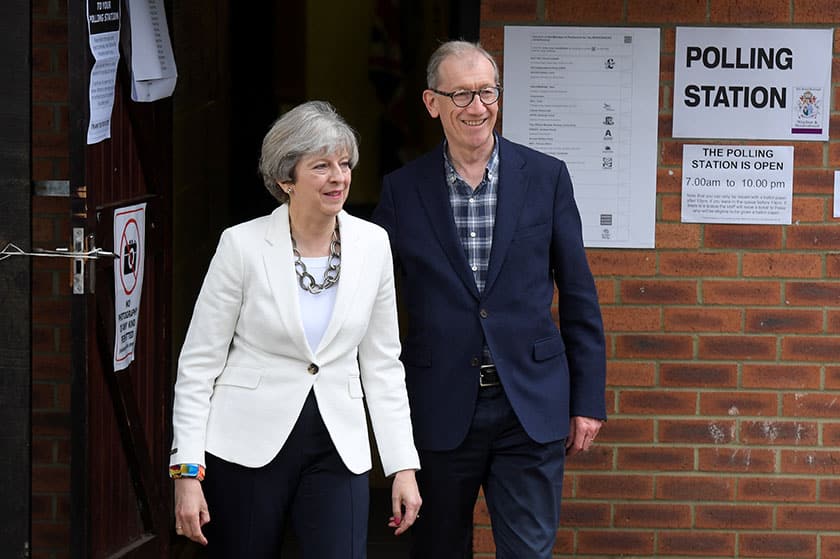 Prime Minister Theresa May’s Conservative Party will fail to win a parliamentary majority in Britain’s election, according to an exit poll on Thursday, a shock result that would plunge domestic politics into turmoil and could delay Brexit talks.

The exit poll predicted May’s party would not win a majority of the 650 seats in parliament to take office alone, meaning she would have to form a coalition or attempt to govern with the backing of other smaller parties.

The exit poll predicted the Conservatives would win 314 seats and the Labour Party 266, meaning no clear winner and a “hung parliament”.

The exit poll sent shockwaves through financial markets. Sterling fell more than two cents against the US dollar. .

It was an extraordinary failure for May, who was enjoying opinion poll leads of 20 points and more when she called the snap election just seven weeks ago.

But her lead had gradually shrunk over the course of the campaign, during which she backtracked on a major social care proposal, opted not to take part in a high-profile TV debate with her opponents, and faced questions over her record on security after Britain was hit by two Islamist militant attacks that killed 30 people.

“If the poll is anything like accurate, this is completely catastrophic for the Conservatives and for Theresa May,” George Osborne, who was the Conservative finance minister from 2010 to 2016 when he was sacked by May, said on ITV.

Analysts were treating the exit poll with caution. In the last election, in 2015, the corresponding poll predicted May’s predecessor David Cameron would fall short of a majority. But as the night wore on and the actual results came in from constituencies, it became clear he had in fact won a majority, albeit a small one of just 12 seats.

That outcome was a triumph for Cameron though, because he had been predicted to fall well short. For May, who went into the campaign expecting to win a landslide, even a narrow win later in the night would leave her badly damaged.

Until the final results become clear, it is hard to predict who will form the next government.

“It’s difficult to see, if these numbers were right, how they (the Conservatives) would put together the coalition to remain in office,” said Osborne.

“But equally it’s quite difficult looking at those numbers to see how Labour could put together a coalition, so it’s on a real knife edge.”

Political deadlock in London could derail negotiations with the other 27 EU countries ahead of Britain’s exit from the bloc, due in March 2019, before they even begin in earnest.

A delay in forming a government could push back the start of Brexit talks, currently scheduled for June 19, and reduce the time available for what are expected to be the most complex negotiations in post-World War Two European history.

The poll forecast the Scottish National Party (SNP) would win 34 seats, the centre-left Liberal Democrats 14, the Welsh nationalist party Plaid Cymru three and the Greens one.

If the exit poll is correct, Labour, led by veteran socialist Jeremy Corbyn, could attempt to form a government with those smaller parties, which strongly oppose most of May’s policies on domestic issues such as public spending cuts.

May called the snap election to strengthen her hand in Brexit negotiations with the other 27 EU countries and to cement her grip on the Conservative Party after she took over as prime minister in the wake of last year’s Brexit referendum.

If she fails to win a majority, that could call into question her position as Conservative leader and might mean a second election in Britain this year.

If Corbyn’s Labour does take power with the backing of the Scottish nationalists and the Liberal Democrats, both parties adamantly opposed to Brexit, Britain’s future will be very different to the course the Conservatives were planning and could even raise the possibility of a second referendum.

May had promised to clinch a Brexit deal that prioritised control over immigration policy, with Britain leaving the European single market and customs union, and said no deal would be better than a bad deal.

Labour said it would push ahead with Brexit but would scrap May’s negotiating plans and make its priority maintaining the benefits of both the EU single market and its customs union, arguing no deal with the EU would be the worst possible outcome.

Pence says no one ‘can question Cyprus’ sovereignty’

Our View: When it comes to presidential statements, less is more