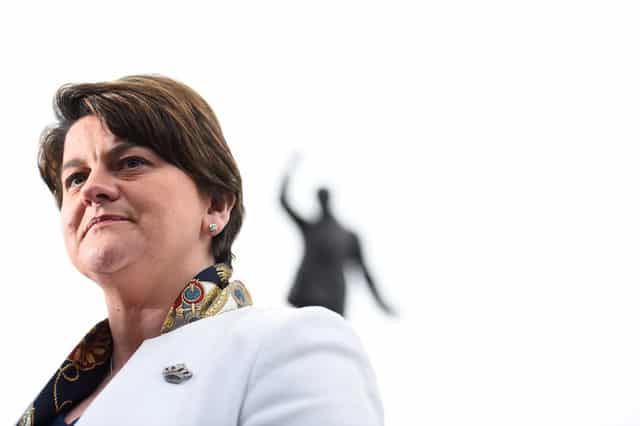 Prime Minister Theresa May’s failed election gamble has cast a party in Northern Ireland in the role of kingmaker, giving the province an unexpected chance to have a big say in Britain’s divorce from the European Union.

The Democratic Unionist Party (DUP), social conservatives who favour Northern Ireland’s continued inclusion in the United Kingdom, have enough seats to keep May in power after her Conservative Party lost its parliamentary majority – just 10 days before the formal divorce talks start.

But a deal between the DUP and Conservative Party would risk destabilising the political balance in Northern Ireland by increasing the influence of pro-British unionists who have struggled for years with Irish nationalists who want Northern Ireland to join a united Ireland.

The Conservative Party’s 318 lawmakers and the 10 Westminster seats of the DUP would allow May’s minority government to pass legislation more easily.

“We will continue to work with our friends and allies in the Democratic Unionist Party in particular,” May said on Friday outside her official Downing Street residence in London.

“Our two parties have enjoyed a strong relationship over many years and this gives me the confidence to believe that we will be able to work together in the interests of the whole United Kingdom.”

Jeffrey Donaldson, a DUP member of parliament, said the election outcome created the “perfect territory” to secure concessions from the Conservatives. These would be likely to include increases in funding for Northern Ireland.

The party said it would be willing to negotiate with May but declined to comment on reports a deal had already been reached.

While the DUP are deeply eurosceptic, they have balked at some of the practical implications of a so-call hard Brexit – a clean break from the EU’s single market – and talks will inevitably touch on efforts to minimise the potential damage to Northern Ireland, an important plank of its election manifesto.

“We want to make sure that Brexit is properly introduced and we will be the effective and possibly sole voice in parliament from Northern Ireland on Brexit,” Ian Paisley Jr, a DUP member of parliament, told BBC television.

“We’ll be making sure we get the best deal for all of Northern Ireland.”

The British province’s largest party was among the most enthusiastic cheerleaders for Brexit and wants Britain to leave the EU’s customs union, but its manifesto focused heavily on maintaining the benefits of membership.

It called for a “frictionless border” with the Republic of Ireland, “ease of trade” with the rest of the EU and a comprehensive free-trade and customs agreement with the bloc once Britain leaves in 2019.

The DUP also called for a safeguarding of the rights of EU citizens in the United Kingdom.

“It’s wrong to say we’re not in favour of a soft Brexit,” DUP deputy leader Nigel Dodds told the BBC, saying he was against a deal that would restore a “hard border” that would cause significant barriers to movement between Ireland and Northern Ireland.

“We want a situation where the best deal is arranged for Northern Ireland.”

But Dodds said the DUP would block any attempt to give Northern Ireland a “special status” within the EU to avoid a hard border, something Irish nationalist rivals Sinn Fein is seeking.

The DUP does support proponents of hard Brexit on the scrapping of the jurisdiction of the European Court of Justice, which is seen among some unionists as being more favourable to Irish nationalists than British courts.

A deal with the Conservatives would put one of the most socially conservative parties in Europe in government. The DUP has fought to maintain tight restrictions on abortion and opposes gay marriage.

The DUP also sees Thursday’s election result as a victory for pro-British unionists in the struggle with Irish nationalists. Party leader Arlene Foster described the election as “a good night for the union.”

Sinn Fein president Gerry Adams described his nationalist party’s rise from four to seven of Northern Ireland’s seats as a “historic result for the party”, but it has said it will maintain its policy of not taking seats in Britain’s parliament.

Unionists appeared to have been sidelined when Sinn Fein pulled out of Northern Ireland’s devolved assembly in January and surged at resulting regional elections, depriving Foster of her position as First Minister in the power-sharing government created by a 1998 peace deal.

“This is a dramatic and significant event for Ireland,” political commentator Noel Whelan said of the election result. “Nigel Dodds and Arlene Foster are now the most significant figures in Brexit talks on the island of Ireland.”

The shift also threatens to deepen a crisis in regional politics in the province of 1.8 million people.

The DUP and Sinn Fein were due to restart talks on Monday on the formation of a new assembly, but a DUP deal could raise questions about the British Conservative Northern Ireland Minister James Brokenshire as an honest broker.

A deal between May and the DUP could involve her accepting demands which make a deal on the formation of a new assembly impossible. The DUP has called for former Irish nationalist militants to be denied the status of victims and for increased status for former members of the British armed services.

“If …the DUP try to prop up a paper thin majority with a hard Brexit, there is no way I would think that Sinn Fein would even entertain the thought of setting up an executive with them,” said political commentator Alex Kane.

Trade deficit in January to April widens to €1.7bn