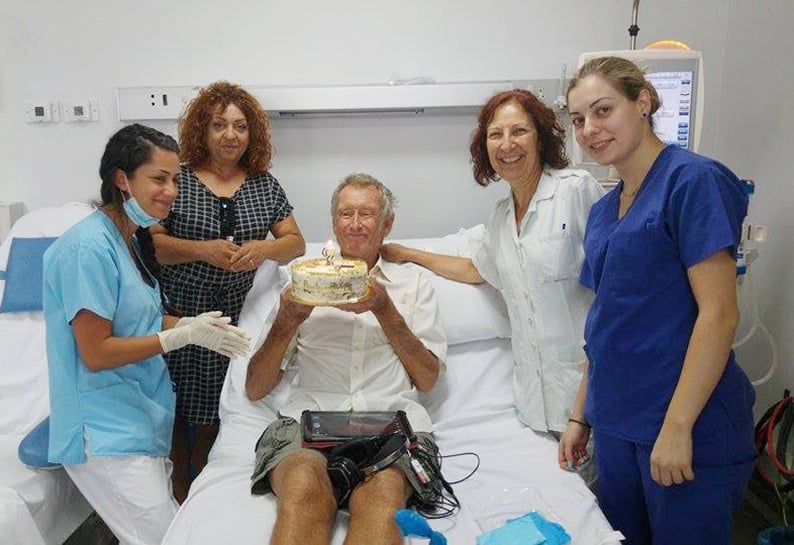 Graham Brown celebrating his Birthday and having dialysis

THE Cyprus government has finally stepped in and will supply up to 20 new life saving dialysis machines to Paphos renal unit, according to a local charity.

Graham Brown, the chairman of the Paphos Kidney Association, told the Cyprus Mail that the state has also agreed, in principal, to create a much needed larger renal unit, as the current one is cramped and struggling to cope with patient numbers.

“I don’t know of a timeframe as to when these units will be operational or exactly where the new unit will be. It’s a positive move though, that the government will now supply these machines,” he said.

The dialysis units which the charity and others have donated will now be used as much needed working spares and finally meet the criteria for the unit. He noted that for every four working machines, there should be a working spare.

“Up to now, we have had 16 working machines and only one working spare,” he said.

Brown has hereditary polycystic kidney disease and receives regular dialysis treatment at the unit to keep him alive. Each hemodiafiltration (HDF) unit which the charity has recently donated and which the government will now supply comes with a €25,000 price tag. If a patient doesn’t receive dialysis when needed, they will die within five days.

Each of Brown’s treatments takes around four to five hours and he needs them three times a week to keep him alive. It costs around €50,000 to treat each patient a year.

He said that space is so cramped at the unit that it is impossible for nurses to treat patients in beds right next to each other and that there isn’t even enough space for wheelchair access.

Brown said that funds raised recently by the charity would go towards purchasing a ‘special’ machine- a multi filtrate acute therapy system- which comes with a hefty €30,000 price tag and is suitable for those dialysis patients with low blood pressure, and can also be used to treat food poisoning, uremic shock and multi organ failure.

Brown noted that regular dialysis treatments takes around five hours and this plays havoc with people’s blood pressure. Patients with low blood pressure can’t use the machines as they need a far gentler treatment, which takes from 36 to 72 hours, so as not to upset their blood pressure. For this they currently have to travel to Nicosia, which has the only machine on the island.

By purchasing and installing one at Paphos general hospital, it will mean that local patients will no longer have to travel to Nicosia for treatment.

“This machine will be installed at Paphos hospital ICU department and the staff will need to be specially trained in its operation,” he said.

Brown said that the money is available and he is merely waiting of the green light from the government, and that although he requested permission more than two months ago, he has yet to receive a response.

“The slowness is frustrating,” he said.

Brown, who has just completed 560 dialysis treatments is acutely aware of timeframes, as his condition is deteriorating.

Our View: Parties now on the defensive over Gesy

Ostapenko aiming to break through the Halep wall