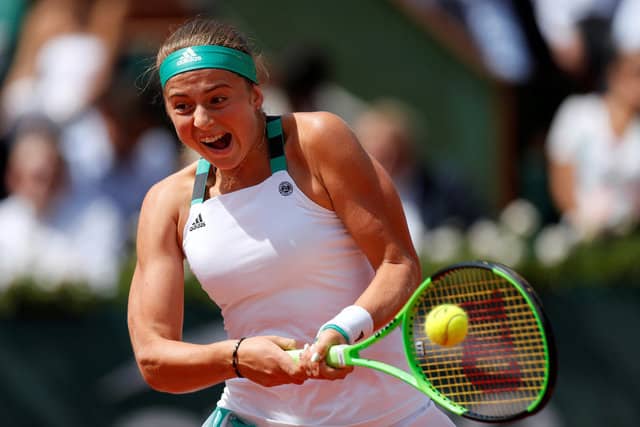 Latvian daredevil Jelena Ostapenko started tennis practicing against a wall – she would be well advised to remember those early experiences when she faces master of defence Simona Halep in Saturday’s French Open final.

The 20-year-old, looking to become the first unseeded woman to lift the Suzanne Lenglen Cup since 1933, blazed her way to the final, hitting winners and errors with reckless abandon.

Third seed Halep, instead, dug herself into her second French Open final, showing the classical claycourt skills that marked her out as many people’s pre-tournament favourite.

Nowhere was her tenacity and ability to soak up punishment more apparent than in the quarter-finals when she trailed Elina Svitolina by a set and 5-1 but somehow found a way to win.

Should she win on Saturday she will be the first player since Justine Henin in 2005 to win a singles’ title at Roland Garros after saving a match point.

With so many big names absent from the draw this could be Halep’s best chance to land a first grand slam – but that is not all that is at stake.

The 2014 runner-up, bidding to become the first Romanian woman to win here since Virginia Ruzici in 1978, would also move top of the WTA rankings with the title.

“I love the pressure,” the 25-year-old, who began the tournament with doubts over her ankle, said.

If anything the pressure is off Ostapenko.

Former men’s champion Mats Wilander described the final as a “bonus” match for the young woman from Riga who thrashed 50 winners in the semi-final against Timea Bacsinszky.

She is the youngest French Open finalist since Ana Ivanovic in 2007 and the first unseeded women’s finalist since Mima Jausovec lost to Chris Evert in 1983.

She also has the chance to emulate the darling of Roland Garros, Gustavo Kuerten, by making the French Open her first career title — the feat the Brazilian achieved in 1997 on the day Ostapenko was born.

The stars seem aligned for the Latvian, whose style is reminiscent of that of Monica Seles. She goes for the throat on every shot, always looking for the lines.

“She is young, almost careless,” said her semi-final opponent Bacsinszky. “She’s not afraid of anything. She’s a big hitter. She’s a baby. The way she hits is fascinating.”

The average speed of Ostapenko’s forehand is indeed higher than men’s world number one Andy Murray at this year’s tournament, a frightening prospect for most of her opponents.

But Halep is the wall.

The Romanian has the nagging ability to force her rivals to go for the extra shot, causing them to take even more risks.

“She puts every ball back,” her semi-final opponent, Karolina Pliskova, herself a big hitter, said.

The Czech has little doubt on the issue of the contest.

“Ostapenko is a dangerous player for everybody, I think, but I would bet everything I have on Simona,” she said.

Up to 20 new dialysis machines for Paphos renal unit