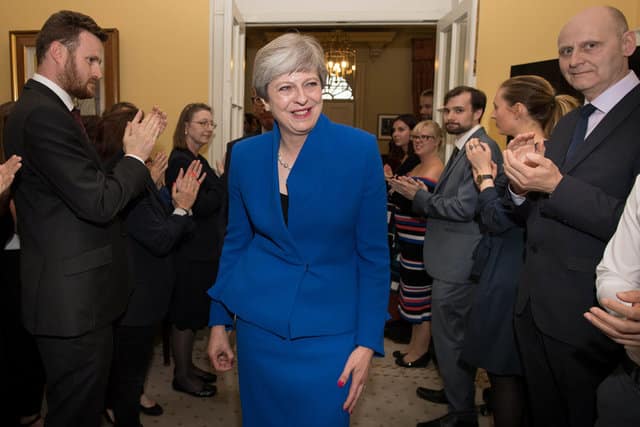 Britain's Prime Minister Theresa May and her husband Philip are welcomed by staff inside 10 Downing Street, in London

By Kylie MacLellan and Estelle Shirbon

British Prime Minister Theresa May was seeking a deal on Sunday with a small Northern Irish party that she needs to stay in power after a disastrous election that destroyed her authority days before Brexit talks are due to start.

British media reported that moves were afoot within May’s Conservative Party to dislodge her, while opposition Labour leader Jeremy Corbyn, who exceeded expectations in Thursday’s vote, insisted she could be ousted and he could replace her.

“Theresa May is a dead woman walking. It’s just how long she’s going to remain on death row,” former Conservative finance minister George Osborne, who was sacked by May when she became prime minister last year, told the BBC.

May’s only hope of forming a government is to win support from Northern Ireland’s Democratic Unionist Party, which won 10 seats. She is seeking a so-called confidence and supply deal, which would involve the DUP supporting the Conservatives on key votes but not joining a formal coalition.

Her Downing Street office initially announced on Saturday that the “principles of an outline agreement” had been agreed with the DUP, only for the smaller party to contradict that account hours later.

Downing Street backtracked, saying she had “discussed finalising” a deal in the coming week. DUP leader Arlene Foster told Sky News she would meet May at Downing Street on Tuesday.

The political turmoil comes as Britain is due to start negotiating on June 19 the terms of its exit from the European Union in talks of unprecedented complexity that are supposed to wrap up by the end of March 2019, when Britain actually leaves.

That timeline now looks even more ambitious than before, not least because May’s electoral debacle has emboldened those within her own party who object to her “hard Brexit” approach of leaving the European single market and customs union.

“The new cabinet obiously will meet early next week, our view of Brexit I don’t think has changed,” Defence Secretary Michael Fallon told the BBC, adding he believe the government would be able to muster parliamentary support for its Brexit plans.

But there were early signs that without a parliamentary majority, a weakened May could not count on all of her party’s lawmakers to support her approach.

“I don’t think she does have a majority in the House of Commons for leaving the single market,” said Anna Soubry, a Conservative member of parliament who campaigned ahead of last year’s referendum for Britain to stay in the EU.

With media asking questions about whether May could remain at Downing Street after her electoral humiliation, ministers said now was not the time for the further uncertainty that a party leadership contest would bring.

“This is not the time for sharks to be circling. This is the time for us to come together as a party,” culture minister Karen Bradley told Sky News.

But Soubry said May’s time in the top job would be limited.

“I just can’t see how she can continue in any long-term way. I think she will have to go unfortunately. But not for some time, let’s get this clear. We need stability,” she said.

Several newspapers said Foreign Secretary Boris Johnson was being urged by supporters to launch a leadership challenge, but he dismissed the reports as “tripe” in a tweet saying he was backing May.

The exact contours of a potential Conservative-DUP deal were not yet known. Fallon said the DUP would agree to back the Conservatives on big economic and security issues.

Many critics, including Scottish Conservative leader Ruth Davidson, have expressed concerns over the DUP’s stances against gay marriage and abortion, among other issues.

Others have also said a Conservative-DUP deal could endanger Northern Ireland’s peace settlement, which relies on the British government being a neutral arbiter between those who want the province to remain in the United Kingdom and those who want it to become part of the Republic of Ireland.

“There has been a lot of hyperbole about the DUP since Thursday, a lot of things said,” DUP leader Foster told Sky News.

“Just to be clear, we will act in the national interest. We want to do what is right for the whole of the UK.”

Ireland’s foreign minister Charlie Flanagan said his country, which after Brexit will have the EU’s only land border with the United Kingdom, was very keen for the Brexit talks to start, and to produce a deal that would not endanger Northern Ireland’s fragile peace process.

“We will be anxious to ensure that whatever the result of these negotiations is doesn’t in any way adversely impact on our unique circumstances here in Ireland, with particular reference to our peace process,” he told ITV.

Meanwhile, a buoyant Corbyn was insisting he saw a route for Labour to form a government, although it was not clear how he would command the support of a majority of members of parliament given the electoral arithmetic.

“I can still be prime minister. This is still on,” Corbyn told the Sunday Mirror newspaper.

A veteran leftist who unexpectedly became Labour leader in 2015 on a wave of grassroots enthusiasm but was seen by most of his own party’s lawmakers as an electoral no-hoper, Corbyn beat expectations with a well-run, policy-rich campaign.

Labour had not secured anywhere near enough House of Commons seats to form a government, even with support from potential allies such as the Scottish National Party and other smaller parties.

But he said his party would seek to vote down May’s Queen’s Speech, or programme for government, when she presented it to parliament, and another national election might be needed to break the deadlock.

“It is quite possible there will be an election later this year or early next year and that might be a good thing because we cannot go on with a period of great instability,” he told the BBC.

A visibly relaxed Corbyn, asked whether he would be in his own job over the long term, joked that “I’ve got youth on my side”. The 68-year-old galvanised support from many young voters, who turned up to vote Labour in unusually high numbers on Thursday.

Man arrested for possession of cannabis

Anastasiades on an official visit to Lebanon