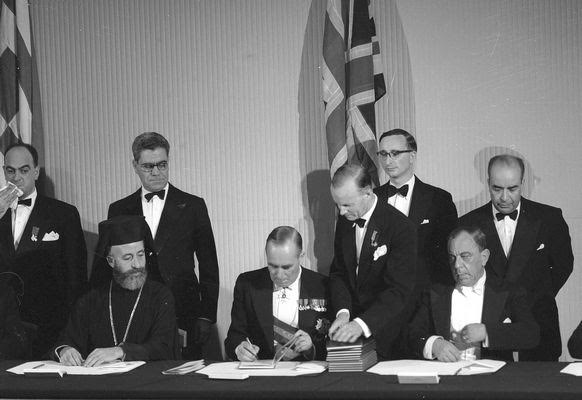 The last time the Cypriots were dragged kicking and screaming to an international conference with Britain and the motherlands on the status and governance of Cyprus was in February 1959 in London.

The motherlands had previously agreed that sovereignty would be transferred from Britain to an independent Cyprus under a power sharing system of governance between the Greek and Turkish Cypriot communities that precluded both union with any country or partition.

Britain indicated she was prepared to transfer sovereignty to an independent Cyprus provided she retained sovereignty over two military bases. For their part the Cypriots undertook to uphold the terms of the transfer of sovereignty and the constitutional state of affairs created by the agreement. Those undertakings were then enshrined in a treaty and guaranteed by Britain and the motherlands.

Although a done deal, the London Conference of 1959 was not without its moments of drama. First the plane bringing the Turkish prime minister, Adnan Menderes, crashed in heavy fog as it approached to land at Gatwick airport killing some members of its crew and a number of Turkish government officials. Miraculously, the Turkish prime minister survived and was well enough to sign the Cyprus Agreements on 19 February 1959.

Meanwhile Archbishop Makarios was holding court with an assortment of political notables from the Greek Cypriot community that included Tassos Papadopoulos – father of 2018 presidential candidate Nicolas – fresh out of law school. Makarios engaged in a bit of brinkmanship that was the hallmark of his negotiating style. Rather like the meetings of the Greek Cypriot national council of today, the majority were reluctant to sign the agreements, although Makarios had the final say.

There are various stories about how Makarios was persuaded to swing the majority in favour of signing. The most plausible is that the Greek prime minister, Constantine Karamanlis, told Makarios, in no uncertain terms, that they would have to continue the struggle to unite with Greece on their own because Greece wanted out. Whereupon Makarios swung the majority of the notables round – though not Tassos Papadopoulos and the Communists – as he always knew he would. He signed the agreements at Lancaster House the next day, telling Karamanlis at a reception afterwards that he had his reasons for engaging in theatrical brinkmanship.

There was also a little drama at the Turkish Cypriot headquarters – of the sublime to the ridiculous variety. I can’t remember whether Rauf Bey told me this anecdote himself, but on the day of the signing ceremony Denktash, who was a key member of the Turkish Cypriot delegation, had come down to the hotel barber shop for a wet shave before breakfast.

It is very expensive today, but in those days it was part of every gentleman’s morning routine. The barber would work up a lather on your face and then slide a fearsome looking razor blade up and down your cheeks and upper part of your throat until your face and upper neck were clear of lather. The barber would then splash cologne on to your face, slapping you vigorously on both cheeks – talking incessantly during the whole process.

‘Good morning Mr Denktash’ cried the barber with delight in an unmistakable Greek Cypriot accent, as Denktash sank into the barbershop’s armchair. Although a courageous man, Rauf Bey panicked momentarily, before recovering his composure. He then sat back and offered his face and throat to the blade and his cheeks to vigorous slapping, before attending the signing ceremony at Lancaster House smelling of old fashioned cologne, courtesy of his Greek Cypriot barber.

The Treaty of Guarantee was not Rauf Denktash’s brainchild. It was a product of the circumstances obtaining at the time. The principle behind the Treaty of Guarantee was that power sharing and the transfer of sovereignty to an independent Cyprus was a painful compromise. Union with Greece (enosis) was the Greek Cypriot leadership’s primary position, and partition the Turkish side’s primary response to enosis. Cyprus therefore had to undertake to respect her own independence and her constitution and the three guarantor powers agreed to bind themselves by treaty to ensure that Cyprus kept her undertaking. In light of the subsequent events the treaty was prescient.

In principle, the same political dynamic holds true today. Let’s face it, a federation is not what the Greek Cypriot leadership would choose, as the rejectionists constantly remind anyone who cares to listen. The primary position of the Greek Cypriot establishment is for things to remain as they are with the Turkish Cypriots returning to the fold as a minority community. No ifs, no buts, no Turkish troops, and no Turkish guarantees.

But like union with Greece was not on the table in 1959, a unitary state with minority rights to the Turkish Cypriots, is not on the table in 2017. It is as much a painful compromise as abandoning enosis was in 1959. Now as then the starting point is whether it is necessary in light of the nature of the proposed federal solution, Cyprus’ membership of the EU and the bitter experience of the past, for there to be international guarantees?

The nature of the proposed federal solution is that the Turkish Cypriots will live in north Cyprus where they will be in political and administrative control in one area unlike previously when they were interspersed throughout the island. As such, in terms of state governance, it is difficult to see the relevance of international guarantees. In terms of governance at the federal level there will be political equality in key areas which should ensure the federation lasts provided there is the political will to make it work – something that was lacking in 1960.

But it is membership of the EU and the extension of the EU legal order to the Turkish side that would ensure the federal constitution is respected. Under Protocol 10, which was done to accommodate the interregnum between the Accession of Cyprus in 2004 and a comprehensive settlement of the Cyprus problem, the relationship of Cyprus with the EU is going to require a fresh protocol to adapt the terms of Cyprus’ accession to the Turkish Cypriot community. This is the reason why the EU has been invited to attend the talks in Geneva. After a comprehensive settlement the federal republic will be guaranteed by immutable EU treaty law.

In terms of security, the Turkish Cypriots appreciate that the presence of Turkish troops and the prospect of formal Turkish guarantees is problematic for Greek Cypriots. Just as the Turkish Cypriots had bad experiences in the past, the Greek Cypriots had similar experiences after 1974. The compromise here is obvious. There will have to be a transition period to usher in the settlement.

There always are transitional arrangements, and it is well known that transitional problems are relatively easy to sort out provided things run smoothly on the ground during the transition period.

Ultimately, it will be the responsibility of the federal and the state law enforcement agencies to ensure that the violence of the past never happens again.

Under EU guidance Cypriots should begin to appreciate that it is the duty of the state not only not to persecute its own citizens but to protect them irrespective of ethnicity rather than side with those who would cause them harm.

Membership of the EU cannot directly provide security in the sense of providing troops to fight and die to protect any community, but its civilised values, often enshrined in laws against racism and discrimination, will in the end change attitudes.

A journalist from the Jerusalem Post put it so well when he said of the achievements of the EU following the 20th century’s two world wars. “There comes a moment when all hearts are ripe for peace,” he wrote.

Unficyp and the prospect of decommissioning

For honest plain-speaking, we need to look to Akinci