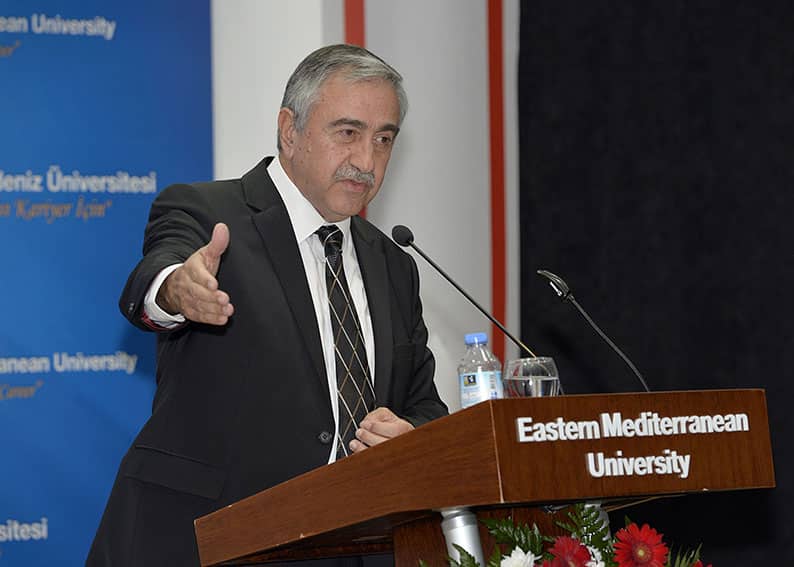 Mustafa Akinci, 'Geneva is not an interim stage. It is a conference for a settlement'

WHATEVER the image anyone has of the Turkish Cypriot leader Mustafa Akinci, I believe he has the gift of communicating and explaining his political thoughts in a very effective way that reveals a modern, astute politician.

His discourse is characterised by simplicity, pragmatism and clarity. Irrespective of whether you agree or disagree with him, nobody can doubt this clarity of thought. He is not inclined to say more than is necessary, he does not put a positive spin on things, he does not resort to slogans, and he does not contradict himself. To put it simply, his words have meaning.

There is no comparison with President Anastasiades in this respect. When our president speaks, you never know whether you believe him, whether you understand what he is saying or what he really wants. You can never be sure about anything he says, he does or promises. You can only listen to him, stay quiet and wait for the next time when he will change his story.

I particularly liked Akinci’s take on the reconvening of the Geneva conference. He said: “Geneva will show the black and white, the point at which we say we will be confronted by reality …  Everything will be settled in this month ahead. The real story is that in Geneva we will have to reach a result on all chapters. At this point you must not see Geneva as an interim stage. It is a conference for a settlement. The time of the negotiations is over because negotiations have been going on for 50 years. If there can be no solution we will have to explain this to our communities. There is no longer an issue of another extension (to the Cyprus problem talks).”

I think through these simple words, Akinci has given the gist of the matter. I cannot believe there is anyone who would not agree that 50 years of negotiations are enough. This saga has taken on an irrational, probably ridiculous, dimension. After 50 years of talks and negotiations it is truly absurd for this procedure to carry on. And even more absurd is to talk about “asphyxiating time-frames”.

Over the last two years our president has repeated on almost a daily basis the following: “We have covered a lot of ground, there are convergences on many issues but we have a long road ahead.” But for God’s sake, when will we reach the end of this road? What else do the two sides still have to say?  There is of course an answer to the question: they have nothing more to say, but they are just repeating the same things over and over. The motive is crystal clear – the perpetuation of the problem perpetuates their political careers.

In these 50 years whatever had to be said was said. It is now time for the words, the accusations, the games and slogans to end. We have had enough of big words and declarations of pseudo-patriotism. Now, as Akinci correctly points out, is the time for our leaders to face the realities. It is the time for decisions. Will they dare take the decisions that are necessary to end this saga? Will they dare look at these realities and decide that it is time to turn over a new page? That the time has come for us to wake up one morning without the Cyprus problem?

Personally, I do not think they will dare. At least on our side I have huge doubts. I do not believe that Anastasiades is a leader who has the guts to take the necessary decisions and show the courage to tell people the truth – that for 50 years their leaders were taking them for a ride, telling them fairy-tales, uttering slogans and selling them patriotism on which they could build their political careers. And that now, at long last, we need to face reality and “see the black and the white”, just as Akinci said.

To Geneva kicking and screaming

So much more is deserved than provocation