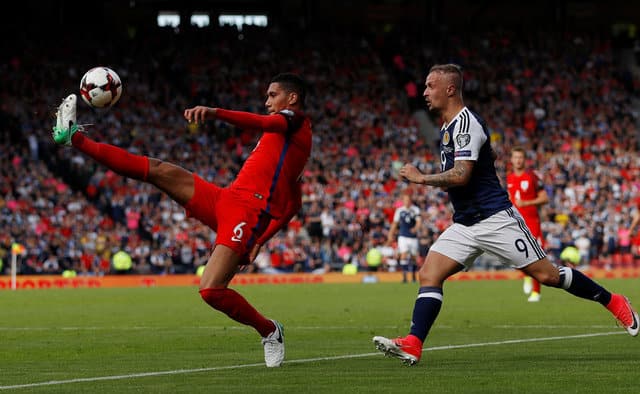 Harry Kane’s injury-time goal gave England a 2-2 draw after a crazy finish to their World Cup qualifier against Scotland on Saturday with Leigh Griffiths having struck twice for the home side in the final three minutes.

Scotland were moments away from a famous victory after the Celtic striker scored with a pair of superbly taken free kicks in the 87th and 90th minutes. Substitute Alex Oxlade-Chamberlain had put England in front in the 70th.

With Hampden Park in raptures after Griffiths’s double strike, with free-kicks from 25 yards, Kane saved England from a humiliating loss to their old rivals with his late goal from close range.

Raheem Sterling launched a diagonal ball from deep on the left and Kane lost his marker to side-foot volley past Scotland keeper Craig Gordon.

England, who were not impressive overall, remain top of Group F on 14 points while Scotland are in fourth spot on eight points.

“Two special free kicks and all of a sudden we’re in stoppage time 2-1 down but it was unbelievable character to get that second which still leaves us top and in a great position. Qualifying is all that matters,” Kane told Sky Sports.

“You have to expect the unexpected and we were 2-1 down from nowhere but we found another gear. It is a good point away from home. Scotland is no easy place to come,” added the 23-year-old striker who captained his country for the first time.

It was agony though for Griffiths who, having not scored for his country before, was seconds away from entering Scottish football folklore. Scotland have not beaten England since 1999.

“It feels like a defeat to be honest. I knew we were going to be under the cosh for a lot of the game because England are a great team.

“To score two goals that late in the game we just have to see the game out but it was a poor pass when it was three on one in the attack and they put the ball in the box for a great finish from Harry Kane. It’s not three points but it could be a massive point in the end,” he said.

Scotland had started the game aggressively, roared on by a capacity 52,000 crowd but England gradually took control and ended the first half looking increasingly dangerous.

Jake Livermore had a deflected shot come out off the post in the 51st minute before Oxlade-Chamberlain broke the deadlock with a good strike, after cutting in from the left.