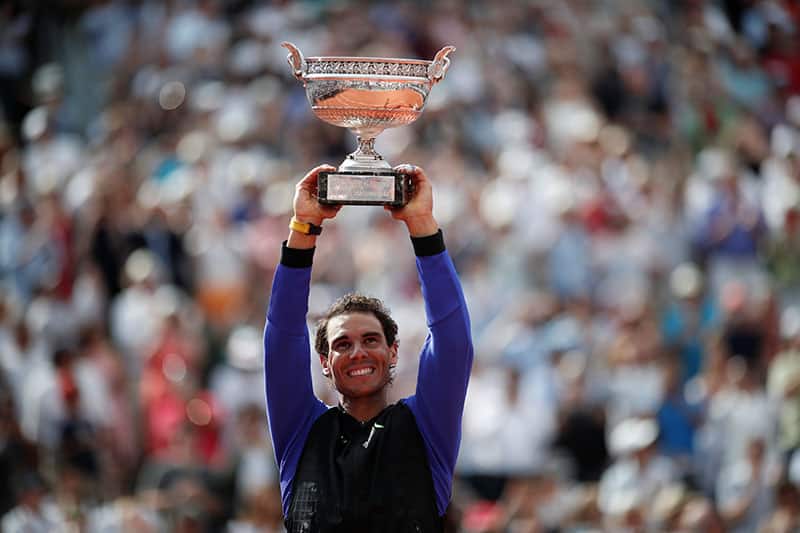 Rewinding the clock to the days when he was untouchable on the crushed brick dust, the 31-year-old turned 2015 champion Wawrinka into a human punchbag, winning in just over two hours.

This title, an unprecedented 10th at a single grand slam in the professional era, was arguably the most impressive of his 15 though as it arrived three injury-plagued years after the last one, without dropping a set and conceding only 35 games in seven matches.

Only Bjorn Borg, who conceded 32 on his way to the 1978 title, has been a more ruthless champion.

Having beaten world number one Andy Murray with a majestic display of power in the semi-final, third seed Wawrinka arrived full of confidence as, at 32, he tried to become the oldest French Open winner since Andres Gimeno in 1972.

But the barrel-chested ‘Stanimal’ was powerless as Nadal turned the final into an exhibition of his clayclourt supremacy — taking his French Open record to an eye-watering 79-2.

As a weary Wawrinka sliced a volley into the net on match point Nadal collapsed on his back on the baseline.

“I’m a little emotional,” Nadal said before getting to clamp his jaws on La Coupe des Mousquetaires. “The nerves and adrenaline I feel on this court is impossible to compare.”

Straw hats and fans were de rigueur for an expectant Court Philippe Chatrier as the final began with temperatures hovering around the 30 degrees Celcius mark — perfect conditions for Nadal’s trademark monstrous topspin game.

Wawrinka, who spent nearly five hours more on court than Nadal to reach the final, looked tentative and heavy-legged although he did have a glimmer in the third game when Nadal was forced to save a break point.

Nadal failed to convert any of the four break points he had in the following game, but drew first blood the next time an opportunity arose to take a 4-2 lead.

Then he switched on the afterburners. A matter of minutes later Wawrinka wafted a forehand long to hand Nadal a second break of serve and the opening set.

Wawrinka was flat, striking not a single winner off his glorious single-handed backhand in the first set, and with less than an hour on the clock his task already looked forlorn.

Nadal was given a time violation warning at the start of the second, but Wawrinka could not halt his charge as the Spaniard bounded into a 3-0 lead in the second having won seven games in a row.

With the crowd attempting to lift Wawrinka he stopped the rot to hold, firing himself up with a roar of “C’mon”.

Nadal was relentless though, pinning Wawrinka back behind the baseline. Even when he was stretched the response was emphatic, one astonishing forehand, whipped from close to the front row of seats to land in the corner, drawing gasps from the crowd and applause from Wawrinka.

Wawrinka could not lay a glove on Nadal and his frustration boiled over as the Spaniard closed in on a two-set lead, destroying his racket frame after a missed forehand.

After Nadal sealed the second set both players left the court while court staff watered down the red dust.

Nothing could extinguish Nadal’s fire though and he surged two breaks ahead in the third set despite the best efforts of Wawrinka to try and extend the contest.

* Took his head-to-head record against Wawrinka to 16-3 overall and 6-1 on clay.

KING OF CLAY
– Became the first player in the Open Era to lift 10 titles at a grand slam tournament.
– He took his record at Roland Garros to 79-2 after winning his 10th straight final in the French capital.
– His overall record in best-of-five matches on red clay is now 102-2.
– Nadal dropped just 35 games in his seven matches at this year’s French Open.
– The Spaniard bagged his 53rd claycourt title, four more than Argentine great Guillermo Vilas.
– Won his 10th titles in Monte Carlo, Barcelona and Paris this year.

MAKING HIS NAME
– Born to Sebastian Nadal and Ana Maria Parera.
– Nadal’s uncle Miguel Angel Nadal, a former football, played for Barcelona, RCD Mallorca and the Spain national team.
– Nadal was introduced to tennis at the age of three by another uncle, Toni Nadal.
– Plays left-handed but writes right-handed.
– Turned professional in 2001 and won the junior Davis Cup with Spain in 2002.
– Won the ATP newcomer of the year in 2003.
– Coached by former Spanish pro Carlos Moya and uncle Toni Nadal.

PROFESSIONAL CAREER HIGHLIGHTS
2003 – Became the youngest player to reach the third round at Wimbledon since Boris Becker in 1984
2004 – Defeated then world number two Andy Roddick to help Spain clinch the Davis Cup title. He won the tournament again in 2008, 2009 and 2011.
2005 – Won the French Open on his debut in 2005 and a year later beat Roger Federer in the final for his second title.
2007 – Became the first man since Bjorn Borg in 1980 to win a hat-trick of Roland Garros titles.
2008 – Won gold medal at Beijing Olympics for Spain in singles. He won the doubles gold with Marc Lopez at 2016 Rio Games.
2009 – Suffered his first French Open defeat when he lost to Robin Soderling in the fourth round.
2010 – He came back to regain the title, beating Soderling in the final. He also won his first U.S. Open title, becoming the seventh man to win all four grand slam titles.
2011 – Matched Borg’s record of six French Open titles.
2013 – Became the first man with eight titles at the same grand slam tournament when he beat fellow Spaniard David Ferrer in the French Open final. He also won the U.S. Open.
2014 – Became the first man to win five successive French Open titles.
2017 – Reached the Australian Open final where he lost to Federer in five sets. The Spaniard won three titles on the Tour before entering Roland Garros.