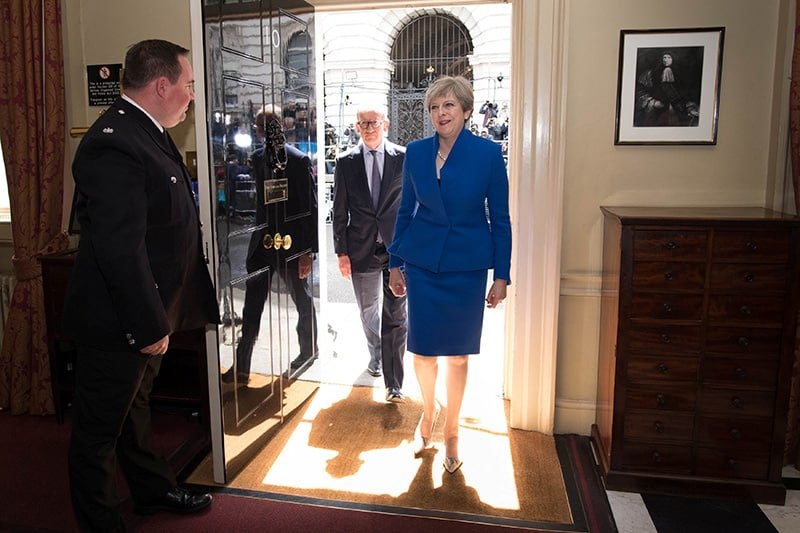 Britain's Prime Minister Theresa May and her husband Philip walk into 10 Downing Street, in London,

Despite her dramatic electoral upset, British Prime Minister Theresa May appears determined to stay in office. In the short term, she could yet manage it. But the longer-term consequences may well be disastrous for her country.

Negotiations on the UK’s exit from the European Union are scheduled to begin on June 19 – just over a week away. In the aftermath of Thursday’s shock result, many assumed May would stand down, perhaps allowing in a new leader from her Conservative party. European leaders had already signalled they might be willing to rework the timetable if the opposition Labour Party won, and would probably have done the same under the current circumstances.

Instead, May seems keen to push ahead with the discussions. It’s a toxic dynamic that will likely make any kind of deal all but impossible.

During the election campaign, May repeatedly talked up the dangers of a “coalition of chaos” if the opposition Labour Party were able to become the largest party. With shameless speed, however, she has negotiated herself into partnership with Northern Ireland’s Democratic Unionist Party, giving her a slim majority in parliament. It’s a brilliant, Machiavellian move, leaving her – for the moment at least – surprisingly unassailable.

It’s hard to imagine there are many people outside her closest circle in Downing Street who genuinely believe May is the right choice right now. But that may not matter. During the campaign, she said she prided herself on sometimes being a “bloody difficult woman.” At the time, she was talking up her ability to negotiate with Europe. Now she is facing down all comers, from her own party and beyond.

It might feel like an affront to democracy, but the truth is that the prime minister is still the leader of Britain’s largest political party, and she has found an ideological ally willing to back her. The government she has formed could hardly be more out of touch with an electorate that has moved sharply to the left. There is little sign she cares.

There will be no shortage of figures in her Conservative Party who would like to bring her down – they have clearly been furiously briefing the media ever since the election results started coming in. A leadership challenge is possible – but far from inevitable.

Former Chancellor George Osborne, perhaps the most likely to do so, stood down from Parliament this election to edit the London Evening Standard. Other potential rivals such as Chancellor Philip Hammond remain within her government, and have so far mostly said little in public either before or after the election.

German Chancellor Angela Merkel’s office on Friday declined immediate comment on the election results. But it already seems likely that May will be moving toward a uniquely adversarial relationship with her continental partners.

Merkel and French counterpart Emmanuel Macron, after all, increasingly define themselves in their opposition to the far right in general and US President Donald Trump in particular. May, by contrast, has openly cozied up to Trump and based her unsuccessful electoral campaign on drawing votes from the anti-European UK Independence Party.

Presumably May is still intending to stick with the team she chose before the election to negotiate Brexit. Led by pugnacious Euroskeptic David Davis, it also includes Trade Minister Liam Fox and Foreign Secretary Boris Johnson. It’s hard to imagine a group more likely to unnecessarily antagonise those they are supposed to be dealing with.

May will also now have to take into account the wishes of her DUP ally, an unapologetically right-wing Christian party with anti-EU tendencies but a desire to see EU money continue flowing to Northern Ireland. Her premiership is dependent on their continued support, and this will make negotiations more complex still.

While she has generally gone out of her way to be vague on what she means by Brexit, the general assumption within Britain is that May wants to renegotiate freedom of movement and migration between Europe and the UK. The cost of that ‘hard’ Brexit is likely to be Britain leaving the European single market, something that could bring with it extremely difficult economic consequences.

In the June 8 election, voters appeared lukewarm about that concept. But May could well choose to pursue it anyway. She’s unlikely to find much support from her European counterparts, however. Indeed, they may have a vested interest in making sure negotiations fail. Europe has little enthusiasm for countries being able to leave the EU, and the patience of EU officials with Britain was already running thin.

Britain still has cards to play: it remains a major player in European defence within NATO, for example. Its relationship with the United States is also important, although in the era of Donald Trump that more a double-edged sword. It’s also unclear how May will now be viewed by the US president, notorious for not wanting to associate with those who look weak.

Not all of these problems would be solved by May standing aside for a new Tory leader – or perhaps even Labour Party leader Jeremy Corbyn in the unlikely event that he is able to form a broader loose alliance with other progressive parties. But they are all intensified by May keeping herself in office.

Things may work out, of course. It’s just conceivable that May could deliver a Brexit success – whatever that means – and win back her shattered credibility without losing power.

If that doesn’t happen, however, neither she nor her party will be forgiven by the country for a very long time.

A six-day war that lasted 50 years

Unficyp and the prospect of decommissioning