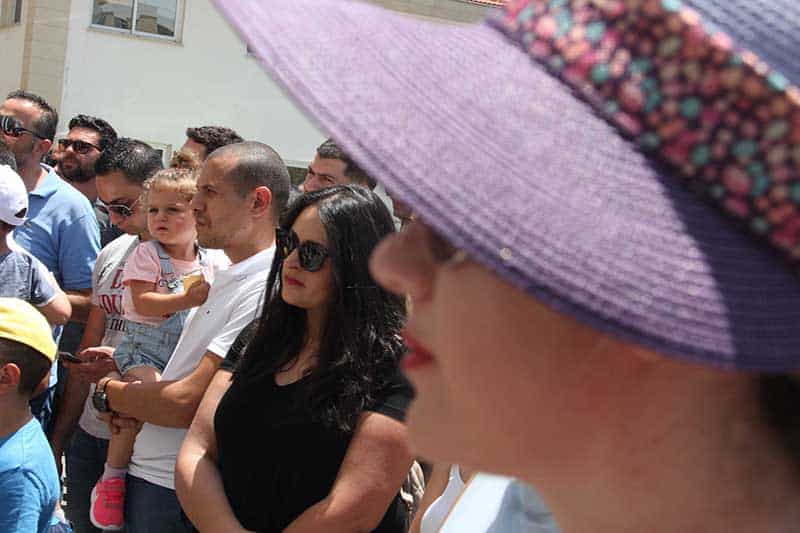 Teachers demonstrating during a strike on Thursday

The period of union restraint and industrial peace, which lasted a bit longer than the duration of the assistance programme, is now well and truly over. Public sector employees had full pay plus increments restored at the start of this year, thus further increasing the pay gap with private sector workers, and now their unions are back to dictating how the country should be run, with the blessing of the political parties.

Cyta unions have blocked all attempts by the finance minister to change the authority’s status and sell a minority shareholding to a strategic investor because this did not serve their members’ narrow interests. In the coming week the EAC unions will hold meetings to tell members to endorse ‘dynamic measures’ in protest against government plans to open up the electricity market that would end the power company’s monopoly.

Government planning envisaged making the Transmission System Operator an independent agency (it is part of the EAC) this summer but foot-dragging by the organisation’s management and unions has caused this to be put back to 2019. The unions are not happy with just delaying the change, but want to stop it altogether, so that a couple of thousand under-worked and grossly overpaid employees could hold on to their privileges at the expense of the rest of population that will carry on paying inflated electricity prices.

Primary teachers’ union Poed has already began its ‘dynamic measures’ holding a one day strike in half the public schools last week with another scheduled at the other half on Thursday. This is a strike aimed at imposing the union’s diktat with regard to the recruitment of teachers. It does not matter that parliament passed a law governing the recruitment of teachers that comes into effect now. The union believe it is above the law and could overrule the legislature and the executive by threatening a strike.

What sort of democracy do we have that allows a bunch of self-serving, unaccountable blackmailers to take key decisions that have a negative impact on the rest of society? By what legal or moral authority does the teachers’ union decide who the employer – the education ministry – should hire as teachers? This is a union that vehemently fights against meritocracy insisting that even the most inadequate, indolent graduates should be allowed to teach, regardless of the harm they may cause to their students.

By what legal or moral authority do the EAC unions decide what the government energy policy must be and veto competition that would benefit households and businesses so that their members could carry on collecting their fat pay cheques and big pensions? Do they own the EAC? Do the Cyta unions own the telecommunications company and decide what its future ownership status should be? Are we perhaps a socialist state in which big corporations are owned and run by workers’ co-operatives?

Have we ushered in a dictatorship of the proletariat by stealth because Akel has imposed its warped communist ideologies on the rest of the parties, none of which dares stand up to the public sector unions for fear of being labelled ‘anti-worker’ and losing votes? This is not just a theoretical issue because this dictatorship of the proletariat has negative practical consequences on society and the economy.

Our students are among the worst performing in most international surveys because our public education system is designed by the unions to serve teachers rather than the children. Electricity rates are among the highest in the EU undermining the competitiveness of businesses so that EAC workers could be among the best-paid employees in the country. Should we also mention the extortionate cost of the public sector secured by Pasydy, which causes major distortions in the labour market through unfair competition?

Pasydy has created a dysfunctional economy in which the state deprives the wealth-creating private sector of workers by offering higher wages, much bigger pensions, job security and an easy life. Only in a basket-case economy shaped by unions would the workers in the unproductive public sector, who add zero value, earn on average 50 per cent more than people employed in the wealth-creating private sector.

For years the taxpayer was pumping millions into Cyprus Airways, the national airline eventually bankrupted by its powerful and greedy unions which were calling all the shots. The state also protected the airline from competition so we were paying exorbitantly high air fares so that air stewards and pilots could be among the best paid in the industry. Since its closure not only are there more routes available from Cyprus but competition has ensured much lower air fares for all of us.

Our politicians refuse to learn anything from the mistakes of the past and seem destined to repeat them because they are terrified of challenging the dictatorship of the unions.

Tales from the Coffeeshop: Misha looks set to be backed by the sheep

Storm brewing for Nadal as Wawrinka blocks his path