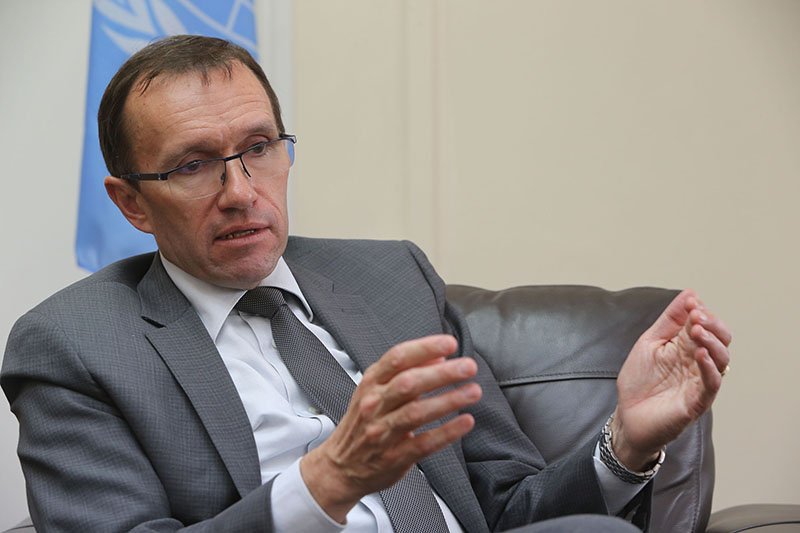 The UN Secretary-General`s Special Adviser on Cyprus Espen Barth Eide is due back in Cyprus on Thursday for meetings with both leaders as he prepares the common document ahead of the new Geneva talks slated for June 28.

UN spokesman in Cyprus Aleem Siddique told CNA on Monday that it was important that no one pre-empted Eide’s work on the document “that will help guide discussions on security and guarantees”.
President Nicos Anastasiades said in Lebanon on Monday that through the document, “we expect that discussions on this chapter will be structured, focused and results-oriented, and not a repetition of the rhetoric of the conference held on January 12”.

“We hope that Turkey will finally engage constructively in this process and submit positions so that progress can be achieved,” he said.

Politis reported on Sunday that the first part of the document would include the positions of each side – Greek Cypriots, Turkish Cypriots and of Greece and Turkey – on security, as they had been recorded at the first Geneva conference in January. A UN source said this was the first time all sides had submitted in writing their positions on the matter.

The Greek Cypriot side, according to Politis, was seeking the abolition of the Treaty of Guarantee and the adoption of a UN resolution that would act as a guarantee for the settlement. It also proposed a trilateral friendship pact among Cyprus, Greece and Turkey providing protection to the island from external threats, as well as a transitional period during which a multinational police force would act as an internal security force.

Greece too, according to the report, also wanted the abolition of the Treaty of Guarantee and the right of unilateral intervention. It also backed the idea of a trilateral friendship pact, and called for the withdrawal of all troops from Cyprus and their replacement by a multinational force that would guarantee security for a certain period.

The Turkish Cypriot side wanted Turkey to remain a guarantor only of the Turkish Cypriot constituent state and to have the right of intervention only in the case of very serious situations and after the invitation of that state’s parliament. It also proposed a timeframe – which would be reviewed every few years – for the withdrawal of foreign troops from the island, but without a specific deadline.

Turkey wanted the Treaty of Guarantee to stay in place and proposed the withdrawal of 8 0per cent of foreign troops after a solution. As for the remaining troops, Turkey wanted a transitional period to allow time to determine whether their presence on the island was not necessary.

Press reports from the north on Monday quoted Turkish Cypriot leader Mustafa Akinci as saying that the approach of zero troops, zero guarantees was unacceptable and that such a position would only render the negotiations useless as it would create a stalemate.

“Both we and Turkey are open to the idea of amending the current system of guarantees,” he said. “There is a way where we can reach an agreement, a formula to suit the conditions of today. But to insist on zero troops and zero guarantees as Greece and the Greek Cypriot side are doing will get us nowhere. They need to abandon this view.”

Akinci has also sent a letter to UN chief Antonio Guterres containing his “worries and proposals” after the impasse observed in the Cyprus negotiations at the two Mont Pelerin meetings and the Geneva Conference, noting that the last opportunity should not be wasted because of the “negative stance” of the Greek Cypriot side.