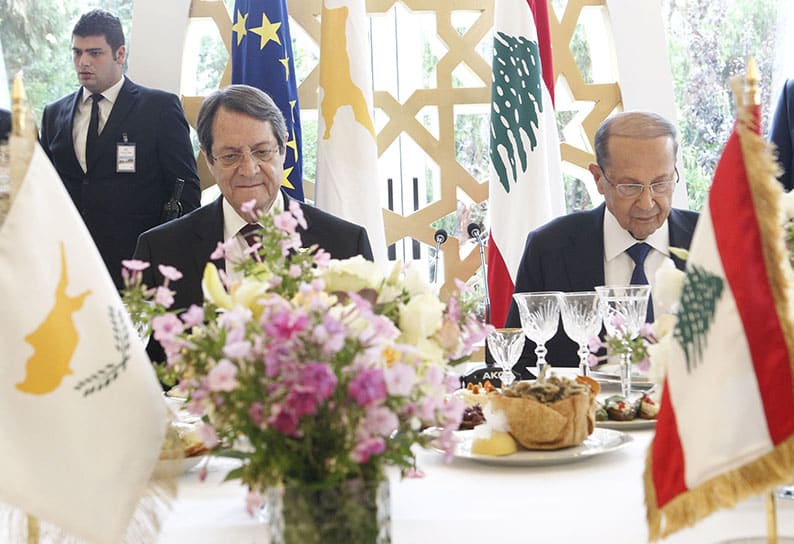 Cyprus expects to host the president of Lebanon together with the Greek prime minister in the first trilateral meeting at the level of heads of state before the end of 2017, President Nicosia Anastasiades said on Monday.

Anastasiades who is on a three-day working visit to Lebanon met his Lebanese counterpart Michel Aoun on Monday morning where they discussed bilateral relations, energy, terrorism and the Cyprus issue.

After a meeting of the two delegations, Aoun spoke of the need for the two countries to cooperate in the area of energy.

Cyprus and Lebanon have been negotiating for several years on delineation of the exclusive economic zone (EEZ) between the two countries.

Cyprus has signed agreements with Egypt, Israel and Lebanon, in an effort to clear the way for peaceful exploration of the hydrocarbons in its own economic zone, but the Lebanese parliament has so far failed to ratify the agreement.

Lebanon argues the EEZ agreement signed between Israel and Cyprus included disputed waters that Lebanon claims belong to it, but which Israel has included as its own.

He also said that he had told Anastasiades of the need to liberalise trade of Lebanese agricultural and industrial products to the Cypriot markets and to examine possible cooperation in exporting Lebanese products through shipping.

Anastasiades said Cyprus’ relationship with Lebanon was greatly valued by the government and the public “and it is one that we are committed to continue upgrading and enriching, so as to foster even stronger links”, he said.

“Our relations extend beyond our geographical proximity: they are deeply rooted in the strong ties between the Lebanese and Cypriot people which date back to the Phoenician times.”

Developments in the region, he added, render cooperation on a number of fields, including political, economic and security, all the more important.

“Lebanon and Cyprus are both feeling the impact of the turmoil that our region is facing,” Anastasiades said.

“Within the context our cooperation, and as an indication of our strong will to further support Lebanon, I’m looking forward to host you in Cyprus, together with the prime minister of Greece, in the first trilateral meeting at the level of heads of state to take place before the end of 2017,” he added.

Another issue discussed in Beirut was Cyprus’ initiative to combat smuggling of antiquities and artefacts from the Middle East to Europe.

“I assured the president of Lebanon’s absolute support for this initiative,” Aoun said.

One dead in Greece and Turkey quake