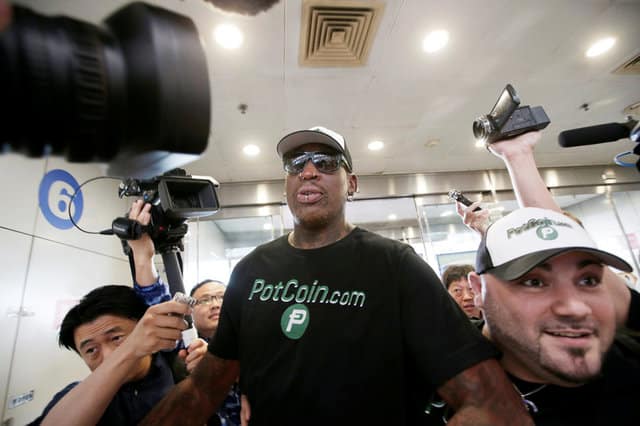 Former National Basketball Association star Dennis Rodman said on Tuesday he was on his way to North Korea as a private citizen, returning to the isolated country where he has previously met leader Kim Jong Un.

Rodman was mobbed by journalists when he arrived at Beijing’s airport on Tuesday to catch a flight for the North Korean capital.

“My purpose is to actually to see if I can keep bringing sports to North Korea, so that’s the main thing,” said Rodman, who spoke quietly and was escorted through customs and immigration by two handlers.

Rodman said earlier in a tweet: “I’m back! Thanks to my sponsor www.potcoin.com.” The company bills itself as a digital crypto-currency provider for the legal marijuana industry. Rodman added in the tweet that he would “discuss my mission upon my return to the USA.”

Tensions have heightened on the Korean peninsula over Pyongyang’s nuclear and missile tests and its vow to develop a nuclear-tipped missile capable of hitting the US mainland, presenting US President Donald Trump with perhaps his most pressing security worry.

Rodman appeared twice on Trump’s “Celebrity Apprentice” show before he became president and praised him on Twitter during last year’s election campaign.

“I am pretty much sure that he is happy with the fact that I am over here trying to accomplish something that we both need,” Rodman said, when asked on Tuesday if he had spoken with Trump.

US Under Secretary of State Thomas Shannon, speaking with reporters in Tokyo after meeting with Prime Minister Shinzo Abe’s top national security adviser, said Rodman was travelling as a private citizen.

“We are aware of his visit. We wish him well. But we have issued travel warnings to Americans and suggested they not travel to North Korea for their own safety,” he said.

Four Americans are being held in North Korea, including 22-year-old student Otto Warmbier, who was detained in January 2016 and sentenced to 15 years’ hard labour for attempting to steal a propaganda banner.

The flamboyant Rodman, who has called Kim “an awesome kid,” said in an interview with CNN in 2014, his travels to North Korea would help “open the door” to the isolated nation.

The unpredictable Trump has offered some mixed messages to Kim Jong Un, saying he would be “honoured” to meet him under the right conditions and once describing the young leader as “a pretty smart cookie.”

But Trump has also described Kim as a “madman with nuclear weapons” who could not be let on the loose.

The basketball Hall of Famer has faced ridicule and criticism for his trips to North Korea, which some US politicians and activists view as serving only as fodder for North Korean propaganda.

Rodman, 56, nicknamed “The Worm” during his playing career and known for his tattoos, body piercings and multi-colored hair, is considered one of the best defensive players and rebounders in NBA history.

He won five league championships with the Detroit Pistons and Chicago Bulls.

Policewoman shot in head at Munich station, no terrorist link