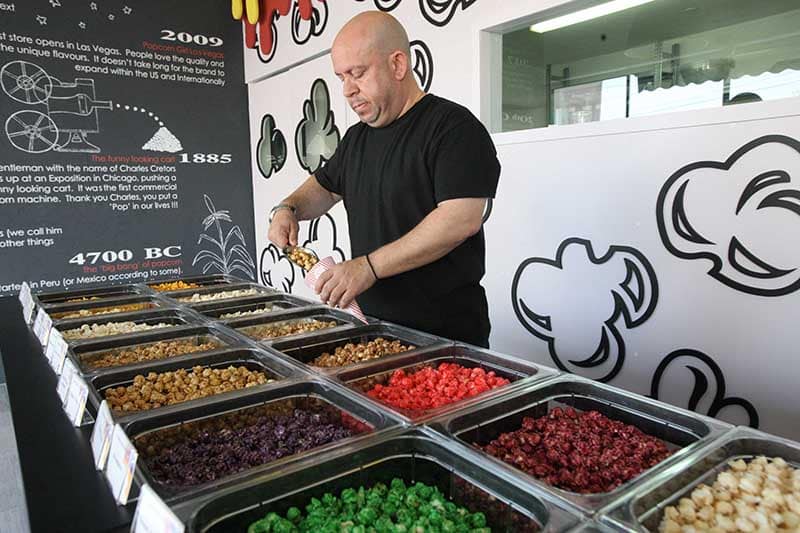 What’s the ultimate American food? Hot dogs, right? Or hamburgers. Well, according to a recent survey, the foodstuff we most associate with the USA is the humble bag of popcorn – a favourite with movie-goers, softball fans, circus audiences and pretty much anyone who’s spending the evening on the couch with a bottle of beer and a Seinfeld rerun. Unlike other foods we consider iconic (pizza, apple pie and, yes, hot dogs), popcorn was actually invented in the country – or on the continent, anyway; Mexico to be precise. So it should come as no surprise that the latest franchise to traverse the ocean is none other than the renowned Popcorn Girl.

Originating in Las Vegas, Popcorn Girl is a purveyor of ‘gourmet popcorn’ – two words we’re definitely not used to seeing together! But apparently it’s a thing; a big thing, if the reviews are to be believed. People all over America are thrilling to its every flavour: Creamy Cheesecake, Pink Cotton Candy, Sea Salt and Caramel, Cinnamon Toast, Jalapeno Ranch, Peanut Butter Chocolate, Toffee Almond and even Birthday Cake! With tens of flavours on offer, this is popcorn that’s clearly popcorn, but somehow tastes like something else. And looks very different from our Saturday-night Cineplex versions too. Appearing in a riot of colours, this titular Popcorn Girl product is a real rainbow, with the Cornfetti flavour perhaps the most crazily-hued: everything from bright red to hot pink, virulent green to deep indigo, it’s the sort of kaleidoscopic product that makes kids go wild. But can this profusion of flavours and colours really make it in Cyprus where we’re more used to a bucket of salted plain (or beautifully buttered if doing Christmas on Ledra!)? 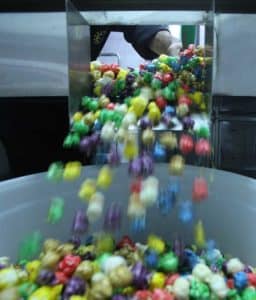 Well yes, says local franchise owner Nikos Pantouris, founder of the first Popcorn Girl not only in Cyprus, but in the whole of Europe. “We’ve only been open a month or so, and we’re already a success,” he enthuses. “Not only do we have people dropping in all the time, we also get orders for events every day; Popcorn Girl Cyprus has already done six birthdays and several parties, and we also,” he says, glancing at his calendar, “have another two massive events coming up in Limassol this week, and a host of weddings and christenings over the summer.”

‘Weddings?’ I can hear you thinking. ‘Christenings?’ But yes, having a so-called ‘candy table’ at your function is now the thing to do, apparently: anyone hosting any sort of get-together is now doing their best to make it just a little bit different. “You can come in and order as much as you need of whatever flavours you prefer,” Nikos explains. “We can provide you with coloured buckets and food grade serving bowls for the tables, or individually wrapped bags for favours – an idea which was a big hit over the recent Costas and Eleni name day,” he grins. “Plus, we’re preparing more Popcarts at the moment.”

If you’ve travelled into or out of Larnaca or Paphos Airports of late, you’ll probably already know what the Popcarts are. Unmissable in their finery, each is mobile popcorn stand complete with black-and-white striped awning and a profusion of multi-coloured popcorn. But it’s not just travellers who can enjoy their popcorn-on-the-go… Popcarts are coming soon to a venue near you and can even, Nikos reveals, be hired privately and filled with the flavours of your choice.

While the Nicosia outlet offers fewer flavours than the Vegas store, there are still over 30 to choose from. Made fresh on the premises by Chef Sofronis in the purpose-built kitchens, this gourmet popcorn is created to a secret recipe, jealously guarded by the Popcorn Girl herself. “It takes about 20 minutes to pop,” says Nikos, pointing out the first in a series of high-tech machines, “and then roughly 80 minutes to coat – you have to keep it moving all the time to make sure every part of the kernel is covered with flavour.”

Flavourings are imported (and again, the recipes are secret), and range from Cheesy Wonder to Movie Theatre, Cookies and Cream to Sour Cream and Chives – which last was a bit of a hit in the offices of The Cyprus Mail. Our proofreader can’t get enough of it, while one of our female journalists suggests it’s an ideal accompaniment to an evening of beer with friends: “I never buy or make popcorn, but I actually really like this! It’s rich, buttery and herby all at the same time!”

The salty range is also a hit with our Chief Editor, who professes a particular passion for the Sea Salt and Vinegar. “I don’t really like sweet popcorn,” she adds, “but the saltier versions are great: Movie Theatre, Cheesy Wonder, the Sour Cream… nice and soft and buttery; I like them all.” Meanwhile, our What’s On girl plumps for the sweet Cornfetti mix, munching away happily at the variegated bag which, she divulges, “secretly reminds me of something out of Charlie and the Chocolate Factory!” And one of our sub-editors has got hold of the Movie Theatre concoction, and is quietly claiming it’s “exactly what you expect cinema popcorn to taste like!”

Sated on popcorn, we turn to the all-American fudge, a sideline to the titular product which is also produced in store, and can be purchased in delectable individual chunks or full-sized trays. And it transpires that it’s a jolly good thing we’re a sweet-toothed office of sugar-monsters, because this is certainly Not Your Average Fudge! “It’s much softer than the fudge I’m used to,” says our Irish sub-editor, who’s sampling the Orange Chocolate. “Much sweeter.” This seems to be the general consensus where the spin-off product is concerned. Our proofreader suggests the Chocolate Mint tastes “just like a brownie; I bet kids would love it!” and one of the journalists who is unfamiliar with fudge is in rhapsodies: “Okay, this is divine! It’s a total sugar rush – where can I buy it?”

If our office reaction is anything to go by, both the popcorn and the fudge are set to be a big hit on the island. Neither are foodstuffs we’re particularly into in the Mediterranean, but both seem to play to the local ideal of new being better. It may be a long, long way from Vegas to Cyprus, but this is a franchise which seems to have crossed the oceans with ease… And I wouldn’t be at all surprised if, some time in the near future, you rock up at a wedding to find the Popcorn Girl in attendance….