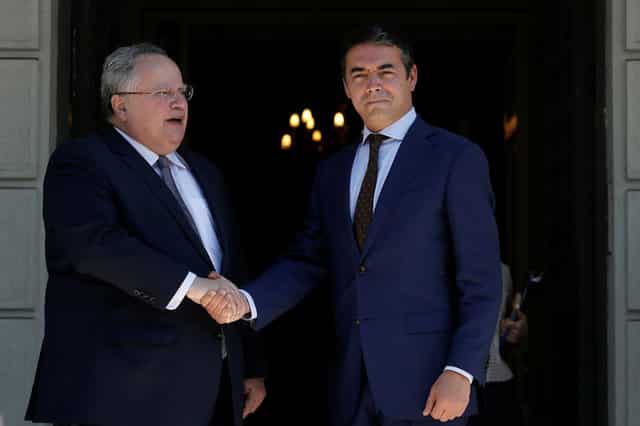 Macedonia asked Greece on Wednesday to help its bid to join Nato and the European Union, efforts frozen by a decades-long dispute over the ex-Yugoslav republic’s name.

Greece, a member of both groups, says Macedonia’s use of the name could imply territorial claims on Greece’s most northerly province of the same name.

It is withholding support for Macedonia’s further integration until it agrees to change it and has managed to get many international bodies, including the United Nations to formally refer to it as the Former Yugoslav Republic of Macedonia, or FYROM.

“I’m here to ask for your support,” Foreign Minister Nikola Dimitrov, at one point Skopje’s negotiator with Greece over the name, said in Athens.

“I’m convinced that you have the leverage in your hands and this leverage can help towards closing the way for the one open issue,” Dimitrov said through an interpreter.

Athens would support Macedonia’s integration “in every way, once the name issue has been resolved,” Greek Foreign Minister Nikos Kotzias said during a joint news conference.

“That is a the pre-requisite and I believe we must – and can – work towards a good compromise benefiting both sides,” Kotzias said.

The Macedonia name dispute has dragged on for almost 26 years with no clear progress. Athens has previously insisted that Skopje use a compound name such as “New” or “Upper” Macedonia.

It also blockaded Macedonia’s southern border in the early 1990s, at least in part leading to a change in Macedonia’s first flag, which depicted the Vergina Sun, a symbol from the gravesite of the ancient kings of Macedon, which is in Greece.

But the new administration of Prime Minister Zoran Zaev, in coalition with parties representing the country’s ethnic Albanians, has pledged to speed up the country’s bid to join the EU and Nato.

Dimitrov will oversee the UN-sponsored negotiations with Greece that have been stalled for several years due to the political and debt crises affecting the two countries.

“In this region … we rise or fall together,” he said, switching to English.