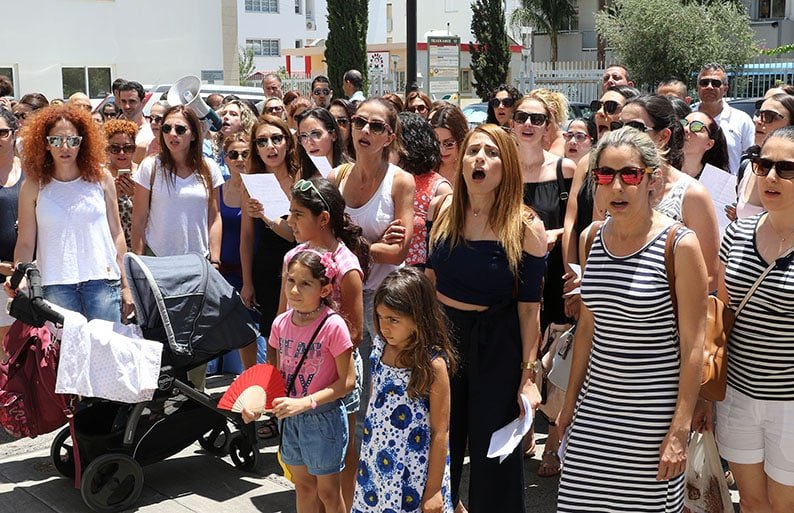 Teachers protesting outside the education ministry on Thursday

Members of primary education teachers’ union Poed went on strike on Thursday morning in Paphos and Limassol schools as well as in the rest of the districts that did not strike last week.

This is the second all-day strike, planned by Poed to protest the approval by parliament of two bills overhauling the system of appointing teachers to state schools.

Poed members in Nicosia, Larnaca, and Famagusta walked out last week, and this week it was the turn of their Limassol and Paphos colleagues.

Around 120 primary schools and around the same number of pre-schools went on strike, the union said. Teachers from Nicosia, Larnaca and Famagusta who did not participate in the previous strike on June 8 as they were organising school trips or end of year ceremonies also participated on Thursday.

The cause for the strike is parliament’s approval of two bills overhauling the system appointing teachers to state schools which will now require examinations as opposed to the current system of appointments based on year of graduation.

According to Poed secretary general, Apostolos Apostolides, 300 contract teachers are negatively affected by this and may lose their jobs within two years. Poed is demanding that such teachers cannot be fired when the new regulations come into force. The union maintains that as long as positions exist for contract teachers, they must be filled first by those with more than 30 months’ experience. The union said that the affected teachers would go to court to claim their right to open-ended contracts.

Following a meeting of a union delegation with Education Minister Costas Kadis during the protest outside the ministry, Apostolides said that the two sides continue to disagree as to who is entitled to an open-ended contract.

Kadis, citing an opinion of the attorney-general, said that the teachers Poed want to be given open-ended contracts are not included in the categories entitled to this right. This concerns 119 teachers, he said.

Poed cites a legal precedence following a court ruling that recognised the right of a contract teacher with more than 30 months’ service to be given an open-ended contract. Some 300 teachers who are after the same status, sent the minister in January letters requesting the same treatment.

“The disagreement on the way the education ministry is handling the issue has been made clear once more,” Apostolides said.

Kadis, Apostolides said, reassured them that his ministry would reply to the letters. The union had said last month that if the ministry’s answer is negative, then the teachers in question would use this against the government in court.

But Kadis last week also questioned the validity of Poed’s concerns as one of the basic provisions of the legislation passed by the House allowed these teachers to be hired under the existing system until 2027. Most of them, he said, will be permanently appointed during the next ten years.

The new regulations include a 10-year transition period, during which both systems will operate, with varying weighted percentages of appointments from each, progressively eliminating the current system.

MTN: €23 million investment in expanding the 3G/4G and fiber-optics networks