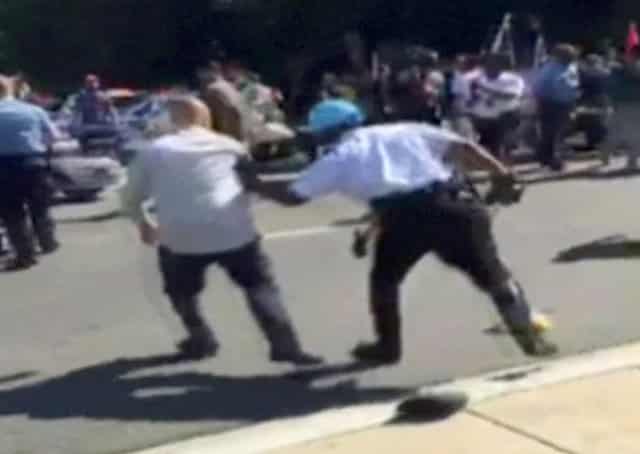 File photo: A Police officer pushes a man away from protesters outside the Turkish ambassador's residence in Washington

Washington prosecutors have charged a dozen Turkish security and police officers with assault after an attack on protesters during Turkish President Tayyip Erdogan visit to the US capital last month, officials said on Thursday.

The daytime brawl outside the Turkish ambassador’s residence in the city on May 16 left nine protesters injured and strained US-Turkish relations.

Erdogan said he would fight back politically against the arrest warrants , broadcaster CNN Turk quoted him as saying on Thursday.

“We will do everything, politically, diplomatically, to resolve it,” he said.

A video posted online showed men in dark suits chasing protesters and punching and kicking them as Washington police struggled to intervene.

“I condemn this attack,” Mayor Muriel Bowser told reporters at a news conference announcing the charges. “It was an affront to our values.”

“If they attempt to enter the United States, they will be arrested,” he said.

Newsham said there was no probable cause to arrest Erdogan, who watched the confrontation unfold from a nearby car.

A total of 18 people have been charged in the incident. They include two Canadians and four Americans, according to prosecutors.

Some additional suspects still have not been identified, the police chief said.

Music proves that we are more alike than we think