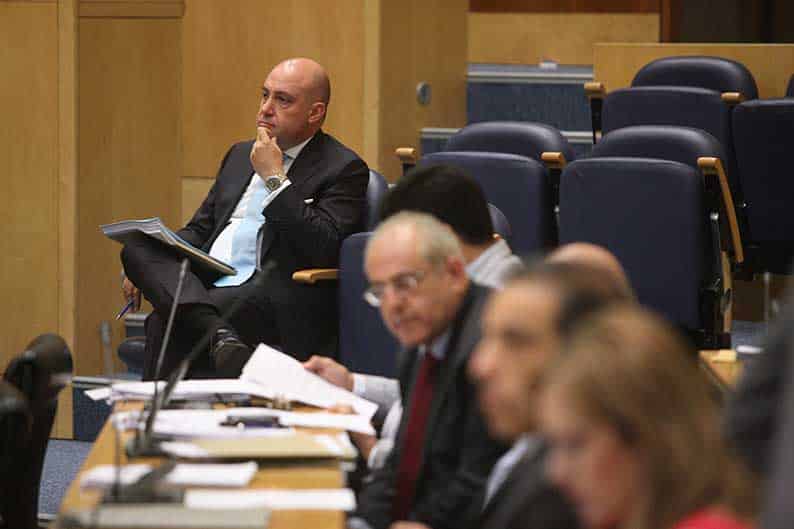 IN what President Nicos Anastasiades described as an historic day, parliament on Friday unanimously passed three government bills and regulations introducing the national health system (Gesy), which were the result of months of haggling at the House health committee.

Two government bills, one creating an organisation that will oversee the autonomous state hospitals, and another harmonising the original Gesy law with European Union requirements, plus a set of ordinances regulating labour issues and contribution rates, were submitted to parliament last November.

After a gradual implementation, the Gesy will be in full swing by July 1, 2020.

“I consider this day historic in the course of the Republic of Cyprus since, after decades of endless discussions, one of the most defining and radical reforms has been achieved,” Anastasiades said. “I consider today’s approval of the three bills that lay the foundations for Gesy to be of equal importance with the adoption and introduction of the social insurance system in the 1960s.”

He added that the Cyprus was finally among other European countries that have universal health insurance for all their citizens in place.

“At the same time, no one disregards the potential difficulties that could arise in the implementation of the scheme, an expected phenomenon in every reform of this scale.”

Original Gesy legislation was passed in 2001, with little done since by way of actual implementation.

Friday’s plenary session was attended by Health minister Yiorgos Pamboridis, who, since his appointment in mid-2015, doggedly negotiated agreement between various powerful interests.

All parties congratulated the minister for his successful efforts to create consensus and stave off attempts to scupper the vote.

Prior to the vote, 12 advocacy groups for patients’ rights delivered petitions calling for the introduction of Gesy to House Speaker Demetris Syllouris.

Ruling Disy MP Marios Mavrides argued that the successful implementation of Gesy will translate to cost savings for the state.

“We must focus on prevention through the health system,” he said.

“If implementation is successful and there is effective oversight, then we can achieve more with less money.”

Mavrides thanked the Troika – Cyprus’ international lenders that bailed it out in 2013 – because, he said, it forced the country to adopt Gesy.

Main opposition MP Yiorgos Loucaides said Friday was a turning point on the way to Gesy’s implementation, but much remained to be done.

“No one is free of responsibility,” he said, referring to the failure to introduce a universal health-coverage system.

“It is important to define a roadmap for implementation. Akel will continue to behave responsibly, as it has during this entire time.”

Announcing Diko’s positive vote on the bills, leader Nicolas Papadopoulos said this did not amount to a “blank cheque” for the government, and expressed disappointment at the level of recent public discourse.

“We have heard wondrous things,” he said.

“We were accused of preparing to submit amendments in order to suspend Gesy.”

Papadopoulos blamed the government for flip-flopping on the issue, adding “it would be comical if it weren’t tragic”.

Edek leader Marinos Sizopoulos said the party would vote for the bills, but censured the government for “lacking vision for health” and having shown “monumental shifts in its positions”.

“We will vote for the bills because Gesy is Edek’s political child, and we will not give it up to anyone for adoption,” Sizpoulos said.

He accused the government of doing nothing to improve the dire situation in public healthcare for four and a half years, and denied he had had any secret meetings aiming to scupper efforts to introduce Gesy.

Describing Gesy as the “second national issue, after the Cyprus problem”, the Citizens’ Alliance chief Yiorgos Lillikas said the next challenge is to actually implement it.

Congratulating the House Health committee and especially Health minister Pamboridis for their determination and resistance to pressure, Lillikas said Gesy is “without a doubt not the perfect system”.

“But we have to implement it, with its weaknesses and its omissions,” he said.

“However big the weaknesses, they can be fixed with political will.”

“In just a short while, the Gesy bills will become law, and the effort to develop and operate it will start tomorrow,” he said.

“We are certain that the efforts from various interests to block implementation will continue, which is why we stand squarely against any plans for interim periods of turning state hospitals into semi-state organisations, instead of rendering them truly autonomous.”

The Greens’ leader Yiorgos Perdikis said the vote marked the “end of the beginning” for the introduction of the envisioned Gesy.

“There must be binding deadlines for implementation,” he said.

“It is going to take political will, which will translate into expenditures. I believe the 2018 budget will be the next milestone in this effort.”

In his speech, Perdikis bizarrely called for the inclusion of alternative treatments, like homeopathy and acupuncture, in the scope of Gesy.

In a statement after the vote, the Cyprus Association of Research and Development Pharmaceutical Companies (Kefea) welcomed the result.

“The law’s approval paves the way to start implementing a system that needs to improve the current situation, eradicating inequalities that exist today between the private and public sector,” it said.

“Kefea will continue its close cooperation with the ministry of health and Health Insurance Organisation (HIO), with the aim of ensuring the new system substantively upgrades patients’ access to innovate, effective and safe treatments.”

The EU Commissioner for health and food safety Vytenis Andriukaitis also comment on the parliament vote on the creation of a national health scheme.

“I am very glad to hear that the Parliament of Cyprus has voted on the scheme. I am a true advocate for universal health coverage which for me is key to ensure that everybody has access to healthcare. It goes hand in hand with the European social pillar and the sustainable development goals. Both of them set a number of essential principles that help bridge inequalities and contribute to social cohesion. UHS is one of them. My congratulations also go to the Minister of health.”

PM May rushed from area of London fire after angry protests