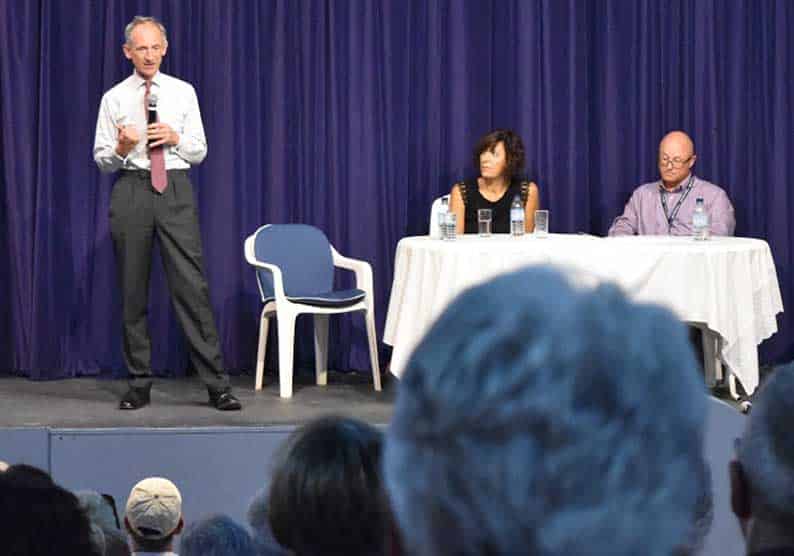 THE British High Commissioner and consular staff hosted a well-attended open meeting for expatriate residents in Emba, Paphos on Friday, with the aim of providing reassurance ahead of the Brexit negotiations which are due to get underway on Monday.

High Commissioner Matthew Kidd, vice consul Christina Smith, and other consular staff answered questions raised by the expats living in Paphos, is home to the largest number of Britons on the island.

The senior British diplomat highlighted that relations between Cyprus and the UK were warm and friendly and that both share a position of wanting to keep the status quo, and for no changes in citizenship between the two to be introduced.

“We are lucky enough to have the same starting point as Cyprus. They have said from the beginning they will be among the EU member states that want to make Brexit work, and will aim to keep the process of negotiation well intentioned, positive and productive, which is very helpful,” he said.

Kidd said that one of reason causing concern for Cyprus is that after a calculation of voting patterns within the EU, on more than 90 per cent of the issues that are voted on, both countries voted on the same side.

“Cyprus is worried that when the UK leaves, a large block of votes which normally works on the same side will no longer be there.”

He also said that Cyprus is anxious as they are one of only two countries that export more than 10 per cent of their goods to the UK, (the other being Ireland) and traffic and custom barriers could lead to the Cyprus economy being adversely affected.

In addition, if the city of London’s financial operations are damaged, there will be a knock-on effect for Cyprus, he said. Other areas of concern for Cyprus post-Brexit are expat residents in both countries, access to UK universities and any jobs that follow.

“We will also have to have a very specific negation regarding the sovereign bases, as Cypriot farmers there are eligible for EU agricultural subsidies on the same basis as if elsewhere in the Republic. The Cyprus government is keen that Cypriots working and living in the bases should not have their rights or entitlements affected,” he said.

Kidd was candid in his speech and highlighted that the negotiating exit process with the 27 EU member states would be a difficult path.

He said that of the three main topics of the negotiation mandate, on two of the areas there is “quite a lot of common ground as to what they want to achieve and what we want to achieve.”

He outlined the three areas:

“The effect of Brexit should not be to create a hard conflictual border between Northern Ireland and the Republic of Ireland as there was before the Good Friday agreement of twenty years ago, nobody wants that,” he said.

Another common view is that rights of expat citizens already living in a different EU county should not be changed.

“It could be quite complicated, as it will involve the UK negotiating with 27 other EU countries.”

“The UK will need to decide on a date after which, new EU citizens arriving in the UK for the first time will no longer be eligible for EU statutes. It will only affect new arrivals and not those already living there,” he stressed.

The third topic is money and how much the UK will have to shell out. He said that this would probably involve a bad tempered slog to agree on a number somewhere between 0 and a hundred billion.

“They will then make the figure work for them and I hope this doesn’t tarnish other areas of negotiation,” he said.

He also said that the exit process will be lengthy, as in addition to the main Brexit negotiations, there are at least one thousand other agreements with countries covering trade, health, air service and taxation agreements, as well as others.

Questions from the floor covered a wide range of subjects including expats’ access to health care, and rights to Cypriot passports (both the UK and Cyprus presently allow dual nationality), and if pre-EU commitments and agreements (such as with the Commonwealth) which were not terminated or could be reinstated, would be adhered to.

“I think that a lot of these agreements will provide a part of the answer as to how the UK and other countries will move forward in a number of areas, such as double taxation agreements, but I don’t know any specifics at this stage” he said.

Speeding and traffic fines on the up

Arrested for shooting in the air at wedding