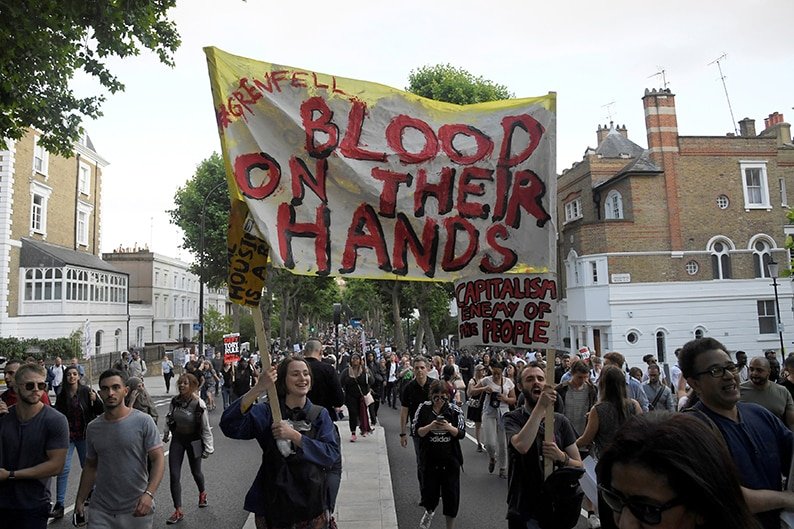 Demonstrators hold up banners during a march in Kensington, following the fire that destroyed The Grenfell Tower block, in north Kensington, West London

PRIME Minister Theresa May was rushed away under heavy police guard on Friday as protesters shouted “Shame on you” after she met residents who live near a tower block in London where at least 30 people died in a fire.

May, already under pressure after a botched snap election, is facing widespread criticism for her response to the blaze. She has promised to set up a public inquiry and pledged £5m to help the victims.

May has outlined a series of measures to help those left homeless by the devastating fire which engulfed the 24-storey apartment block on Wednesday.

But fury has grown in the local community at what people say is the slow response from authorities to the fire and a failure to inform families and friends about the fate of loved ones.

Media reports have said about 70 people are expected to have been killed, although police have not confirmed this.

Local residents also say they are angry that their safety concerns had been ignored and that people had been told to stay in their flats in the event of a fire.

May, who on Thursday met emergency services at the fire site but did not meet locals, visited residents, volunteers and community leaders at a nearby church on Friday and was rushed away afterwards by police as an angry crowd outside shouted “Coward” and “You’re not wanted”.

The protesters barged their way through an automatic door and sought to gain entry to an upper floor. Police barred their way and scuffles broke out, a Reuters reporter said.

The protesters chanted: “We want justice”, “bring them out” and “shame on you”. The protesters were angered when no one from the council came out to address their concerns, reporters said.

The local authority, which owns the tower block where families rent their homes, says it is doing all it can to support the victims and to help the relief operation.

While the deadly blaze at the Grenfell Tower in north Kensington has prompted an outpouring of generosity, it has also unleashed rage at the authorities as the charred tower was cast as a deadly symbol of a divided society.

The block, which housed some 600 people in about 120 apartments, is in a low-rent housing estate next to one of the most affluent areas of Britain.

There have been demands for answers as to how the blaze was able to engulf the building, trapping many on the upper floors. Exterior cladding that was added during a recent refurbishment might have played a part, local residents have said.

The criticism over the blaze has added to pressure on May who is trying to strike a deal with a Northern Irish party to stay in power. Her government is also due to launch difficult Brexit talks with the European Union on Monday.

Earlier on Friday, May met victims privately at a central London hospital.

“I spoke with people who ran from the fire in only the clothes they were wearing,” she said in a statement. “They have been left with nothing – no bank cards, no money, no means of caring for their children or relatives. One woman told me she had escaped in only her top and underwear.”

She has promised those left homeless by the blaze would be rehoused locally within weeks, and the £5m fund would pay for emergency supplies, food, clothes and other costs.

But even those within her own party said May should have faced the locals herself earlier.

“She should have been there with the residents. You have to be prepared to receive people’s emotions, and not be so frightened about people,” former Conservative cabinet minister Michael Portillo told the BBC.

London Mayor Sadiq Khan wrote to May on Friday, saying residents felt increasingly enraged and frustrated by the slow response from the authorities.

“The local community feels their grief has been made worse by the lack of information about their missing family members and friends,” he wrote. Residents in other blocks with the same exterior cladding as Grenfell Tower were concerned, he wrote.

“People are terrified that the same thing could happen to them,” said Khan.

“That’s one of the most terrible things I have ever seen,” William said of the tower’s blackened shell.

Some desperate residents pleaded to speak to the queen and her grandson about their plight and the fate of missing children as they left the site, with William promising he would return.