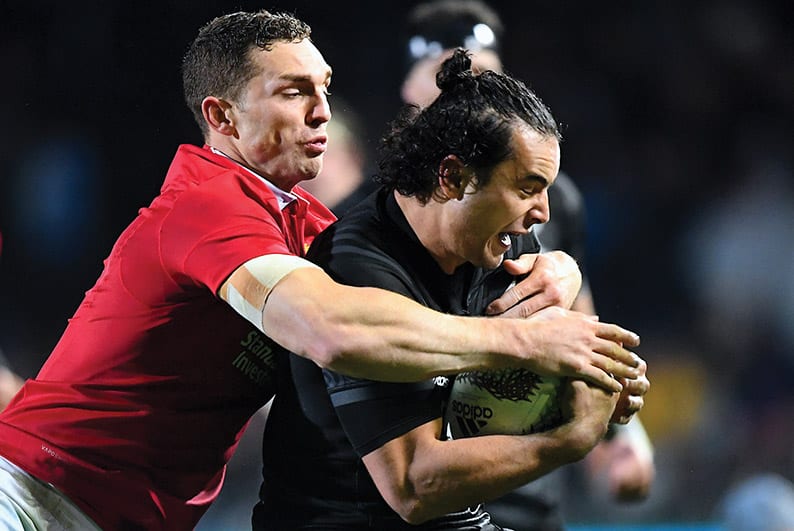 THE British and Irish Lions exploited a yellow card to Tawera Kerr-Barlow to set up a game-winning margin and grind down the Maori All Blacks to record a 32-10 win at Rotorua International Stadium in New Zealand on Saturday.

The victory sent a powerful message to All Blacks coach Steve Hansen as to how tough the Lions would be when the test series gets underway in Auckland next Saturday.

Kerr-Barlow was sinbinned for a dangerous shoulder tackle on Lions fullback Leigh Halfpenny allowing the visitors to extend their advantage from a close 15-10 to 29-10 while the scrumhalf was on the sideline shortly after halftime.

The momentum of a penalty try from a dominant scrum and lock Maro Itoje smashing over following a sustained buildup continued well beyond the 10 minutes that Kerr-Barlow was off the field as the Lions pack took control of the game.

Unless Gatland drastically changes his tactics and personnel in the next seven days the All Blacks will be well aware of what they can expect at Eden Park.

Coupled with their forward dominance in the second half, their tactical kicking and defence were superb, forcing the Maori to make mistakes and keeping them pinned inside their own territory without any ball.

“We managed the game well and squeezed the life out of them,” Gatland told reporters in Rotorua. “It was another step up tonight.”

Halfpenny was also unerring with six penalties and a conversion for the visitors who now face the Waikato Chiefs on Tuesday in Hamilton.

The Maori game had been expected to be an unofficial fourth test and the first half had been tight with the Maori in the game courtesy of loose forward Liam Messam’s try and a conversion and penalty to flyhalf Damian McKenzie.

The Lions held a 12-10 lead at the break courtesy of four Halfpenny penalties but they were guilty of too many indiscretions under pressure themselves, something that Gatland said they had eliminated in the second half.

Halfpenny extended the lead with his fifth penalty and when Kerr-Barlow was dispatched for the tackle that Peyper said had been close to a red card offence, the Lions forwards took total control with Peyper awarding a penalty try after a series of reset scrums.

Itoje then crashed over following another sustained buildup and the game was all but won.

The visitors could have scored more tries had the Maori not produced a valiant scrambling defence in their own 22-metre area.

Lots of music to go around the world