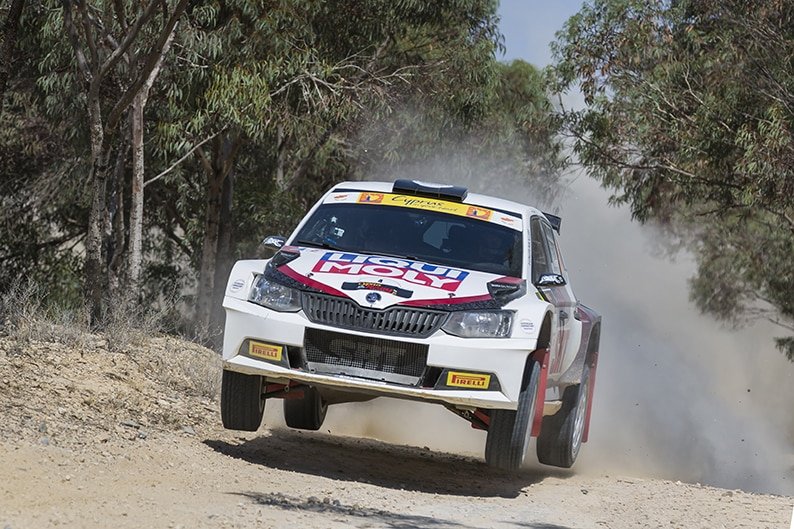 WITH all the usual fanfare and razzmatazz, the Cyprus Rally, fourth round of the European Rally Championship (ERC), got under way on Friday night with the ceremonial start on Larnaca seafront watched by thousands of fans.

Earlier in the day, the crews got a taste of the Cyprus heat as they battled over the short but dusty qualifying stage on the outskirts of Nicosia.

Latvian Nikolay Gryazin, co-driven by Russian Yaroslav Fedorov, clocked the fastest time in his new Skoda Fabia R5 which gave him the advantage of being the first of the fastest 15 drivers to select his rally start position when the crews gathered at the rally HQ at lunchtime. Predictably, as the drivers avoid being first on the road and sweeping it clean for competitors behind them, he chose to start in 15th.

Qatari ace Nasser al Attiyah, four times winner of this event and the most experienced driver in the starting line-up, was second fastest in qualifying, with a difference of just 0.783 seconds. He told me that Cyprus was one of his favourite rallies, and that he was here for the win.

While the northern European drivers may find the June heat taxing, Nasser said it was “no problem – we do 12 hours in the car on the Dakar”. He also declared that he would push from the start. “With all these young drivers, I will have to!” he laughed.

Fifth overall, and fastest of the local crews, was Alexandros Tsouloftas in a new Citroen DS3 R5. Second fastest Cypriot was Charalambos Timotheou in a Skoda Fabia R5.

Double ERC champion Kajetan Kajetanowicz of Poland, twice runner-up here, could only manage tenth fastest in his Ford Fiesta R5 after hitting a rock and driving with a front puncture for three quarters of the stage.

The choice of starting position followed the usual pattern, with the bottom 12 of the 15 places filling up as each driver placed his name on the board. Until, that is, Rauf Denktash of Turkey (13th fastest in qualifying) stepped forward when his turn came and placed his name in the number 1 slot. So, he will be the first car on the road when the race proper starts early Saturday morning with special stages at Kalo Chorio, Lefkara and Analiontas before a regroup in Nicosia ahead of the first run over the city centre Super Special stage which passes around the Municipal Park, through the buffer zone into northern Nicosia and back. After the lunchtime regroup the same loop is covered again in the afternoon. Saturday’s route covers 348.10km including 117.40km of special stages.

Leg 2 starts at half past eight Sunday morning and includes six special stages over 102.34km, starting with two runs through Yeri and Avdelero and culminating in the Love Cyprus Golden stages on the east coast near Ormidhia and Cape Greco before the finish in Ayia Napa at 6pm.

After Spanos blunder, Akel is clearly losing it