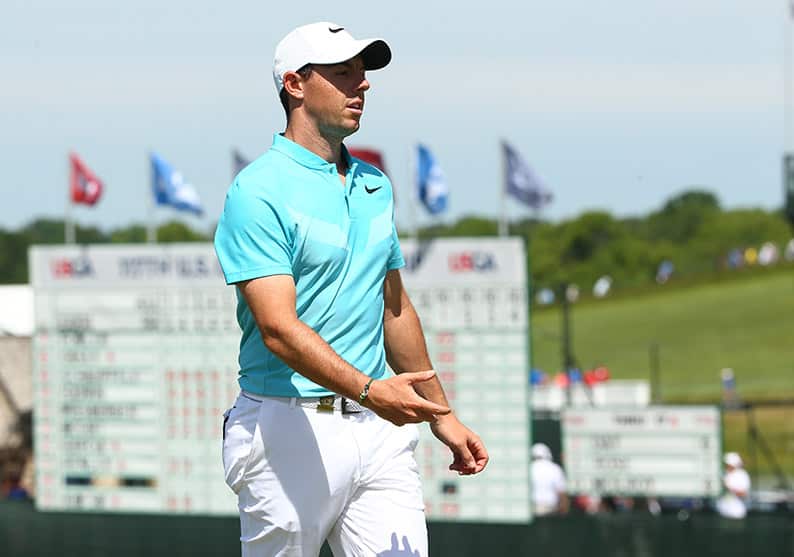 Rory McIlroy walks off the 18th green during the second round of the U.S. Open golf tournament at Erin Hills. (Rob Schumacher-USA TODAY Sports)

Rory McIlroy and Steve Elkington engaged in a social media spat after the Australian took a potshot at the world number two who missed the cut at the U.S. Open in Erin, Wisconsin on Friday.

Elkington, the 1995 PGA Championship winner, suggested that McIlroy had lost interest in adding to his collection of four major championships.

“Rory is so bored playiing golf…without Tiger the threshold is prolly 4 majors with 100mill in bank,” Elkington wrote on Twitter.

“Nobody more gifted than Rory… Hes so bored playing golf on tour,” Texas-based Australian Elkington wrote in a separate tweet.

McIlroy was not amused.

“More like 200mil… not bad for a ‘bored’ 28 year old… plenty more where that came from,” replied the Northern Irishman.

Elkington said Jack Nicklaus never discussed his earnings, to which McIlroy called out the Australian’s spelling and wrote “That’s why jack designed 100’s of golf courses… and it’s knew… mustn’t have taught grammar in the 50’s.”

The exchange came after McIlroy struggled to avoid the brutal Erin Hills rough in a shocking first-round 78 en route to an early exit from the year’s second major.

For the first time since 1974, four players head into the weekend tied atop the leaderboard, with Americans Brooks Koepka and Brian Harman and English duo Paul Casey and Tommy Fleetwood locked at seven-under 137.

That foursome does not quite roll off the tongue like the 1974 gang of Arnold Palmer, Gary Player, Raymond Floyd and eventual winner Hale Irwin, but nevertheless.

Rain started falling a couple of hours after the end of the second round on Friday night, and with thunderstorms likely on Saturday afternoon, chances are the course will not be firm and fiery.

The wind is also forecast to be light all day, so birdies should again be plentiful.

But the long fescue rough remains a severe punishment for wildly inaccuracy, so precision off the tee will remain of paramount importance, no matter what the conditions.

Dustin Johnson, Rory McIlroy and Jason Day all failed to make the cut on Friday, the first time that the top three players in the world failed to qualify for weekend play at the championship since the rankings were created in 1986.

Last year’s winner and world number one Johnson, who arrived late in Wisconsin after staying in California for the birth of his second child, added a one-over-par 73 to his opening 75 to finish on four-over 148, three off the cut line.

Second-ranked McIlroy, who has played just six tournaments this year while battling a nagging rib injury, shot one-under 71 after opening with a six-over 78, and number three Day had a second-round 75 to finish on 10-over 154.