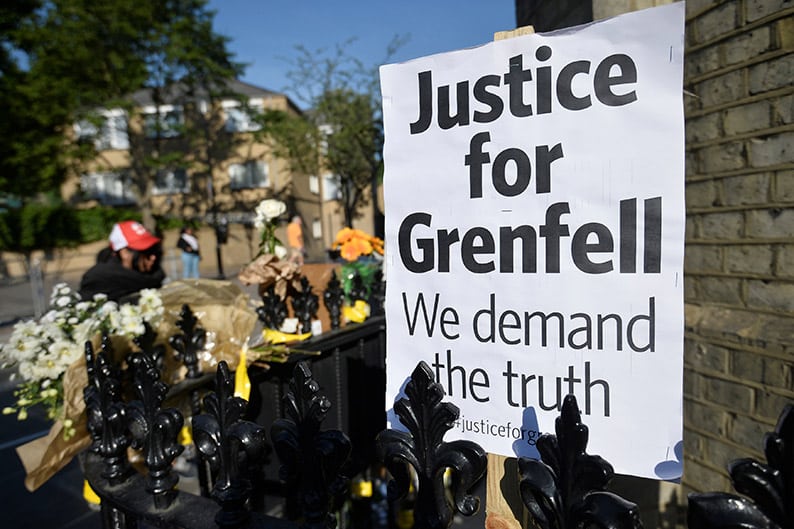 A placard sits amongst flowers left for the victims of the Grenfell apartment tower block fire in North Kensington, London

British Prime Minister Theresa May’s government sought on Saturday to quell anger over a deadly tower block fire by pledging to support the victims of the blaze after protesters jeered her when she visited local residents.

May was rushed away from a meeting with residents on Friday under heavy police guard as protesters shouted “Shame on you” and hundreds stormed a local town hall calling for justice.

After a botched snap election that lost her party its majority in parliament, May is facing criticism for her response to the blaze which engulfed the 24-storey apartment block of social housing on Wednesday, killing at least 30 people.

Residents of the destroyed tower said May was far too slow to visit the stricken community, that the building had been unsafe and that officials have failed to give enough information and support to those who have lost relatives and their homes.

Asked repeatedly whether she had misread the public mood, May did not answer directly but said the focus was on providing support to the victims.

“What I’m now absolutely focused on is ensuring that we get that support on the ground,” May said in a BBC Newsnight interview.

“Government is making money available, we’re ensuring that we’re going to get to the bottom of what’s happened, we will ensure that people are rehoused. But we need to make sure that that actually happens.”

May on Saturday was due to chair a meeting on the government’s response to the fire. The death toll is expected to rise, as at least 60 people remain unaccounted for.

Alongside both police and fire investigations into the blaze, she has promised to set up a public inquiry.

She also pledged £5m of support, housing guarantees and help with access to bank accounts and cash. Those who lost their homes will be rehoused within three weeks, she said.

One of her closest allies, Damian Green, defended May on Saturday, adding that a team would go to the area to answer questions from residents.

While the blaze has prompted an outpouring of generosity, with many people donating provisions and clothes, it has also unleashed rage at the authorities as the charred tower was cast as a deadly symbol of a deeply divided society.

Angry protesters chanting “We want justice” stormed their way into the Kensington and Chelsea town hall on Friday.

After a turbulent three months which has seen Britain scarred by three deadly Islamist militant attacks and now the tower blaze, Queen Elizabeth said the mood was deeply sombre but that the British people were resolute in the face of adversity.

“It is difficult to escape a very sombre national mood,” Elizabeth said in a message on her official birthday. “The country has witnessed a succession of terrible tragedies.”

“Put to the test, the United Kingdom has been resolute in the face of adversity,” Elizabeth said. “United in our sadness, we are equally determined, without fear or favour, to support all those rebuilding lives so horribly affected by injury and loss.”

Such a direct message from the monarch is rare and indicated the extent of the turmoil in Britain.

After a tumultuous week that pitched Britain into its deepest political crisis since the Brexit referendum a year ago, May’s future was already uncertain due to her failed gamble on a snap election.

Britain is now likely to go into arduous talks on Monday about its exit from the European Union with a weakened leader who is dependent on a small Northern Irish party.

Matthew Parris, a columnist and former Conservative lawmaker, said May’s response to the fire had shown a lack of judgment which made her unsuitable to be prime minister.

“Wallowing in the wash of a general election that stripped our prime minister of her authority on the very eve of EU negotiations, neither common sense nor the evidence suggest she can re-establish public confidence,” Parris wrote in the Times.

“This prime minister is not viable.”