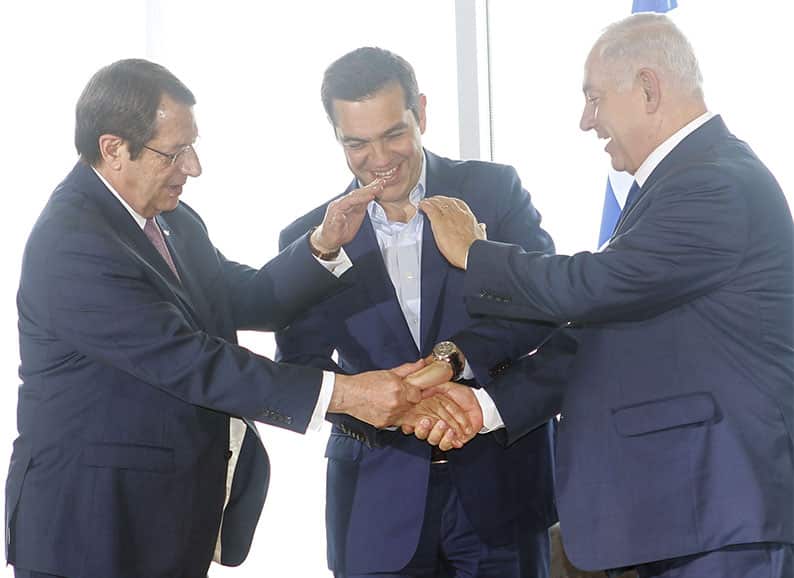 THE East Med pipeline taking gas to Europe from reserves in Israel, Cyprus and south of Cyprus was a visible possibility, Israeli Prime Minister Benjamin Netanyahu  said in an interview published on Sunday.

In an exclusive interview with Kathimerini newspaper, Netanyahu, said that if the pipeline became a reality, it would have tremendous prospects.

President Nicos Anastasiades, Netanyahu, and Greek Prime Minister Alexis Tsipras, who met on Thursday in Thessaloniki for their fourth trilateral Summit, said in a declaration issued afterwards they would speed up plans for the development of a pipeline channelling gas to Europe from newly discovered east Mediterranean reserves.

European governments and Israel agreed in April to explore the possibility of a Mediterranean pipeline project to carry natural gas from Israel to Europe, setting a target date of 2025 for completion.

The 2,000-km pipeline, known as the East Med Pipeline, would link gas fields in the Israel and Cyprus EEZ with Greece and possibly Italy, at an estimated cost of €6 billion.

Netanyahu said that Israel had significant, proven gas reserves, and smaller ones also proven, but significant reserves were in Cyprus, and probably also off the coast of Crete. He said: “So, we are talking about large stocks that can reach the European market. If we join forces, it will cost the companies concerned a lot less to build a pipeline than to build one for each field. This obviously sounds reasonable.”

Commenting on whether he was concerned about any tension in the region that might be caused by Turkey, when drilling begins in the Cyprus EEZ, Netanyahu said he always hoped “the issues will be resolved peacefully”.

As to the settlement of the Cyprus problem, Netanyahu said that it’s been 44 years. “If they can start and finish it (settlement talks) in the next four months, we will be happy, believe me”.

The Israeli Prime Minister believed there was enough gas to support multiple pipelines. Even though the East Med was considered impossible a year and a half ago, he said, the Greek-Italian company that did the initial survey re-estimated that it was feasible. It would do the exercise again and if the estimates were confirmed, work on building the pipeline would begin soon after.

Israel and to a lesser extent Cyprus are thought to be sitting on vast quantities of natural gas deposits.

Israel has discovered more than 900 billion cubic metres (bcm) of gas offshore, with some studies pointing to another 2,200 bcm waiting to be tapped. Apart from the European market, Israel was exploring the possibilities of exporting its gas to Turkey, Egypt and Jordan.

Cyprus’ Aphrodite gas field has proven deposits of 128 bcm and drilling in other plots is scheduled to begin next month, despite warnings by Turkey.

Britain hurtles into the Brexit unknown

Return of Famagusta constitutes a priority its mayor says