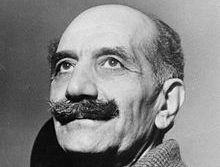 FRENCH World War I hero, Marshal Henri Philippe Petain and our very own General George Grivas share many common characteristics. Starting with their appearance, they look very similar indeed – the same moustache, the same height, even their baldness and head shape were almost identical.

But the most impressive similarities are their biography and ideology. For both, a glitteringly glorious phase was followed by a nationally shameful period while both were extreme nationalists and anti-communists.

Petain was declared a national hero of France and awarded the title of marshal during World War I, especially for the courage he had shown at the battle of Verdun. The love and respect the French felt for Petain reached its apogee during the inter-war period. But during World War II Petain destroyed his good name, leaving the French speechless, when he rushed to follow Hitler who appeared to have been his idol.

In return for the great admiration he had for Hitler, he was appointed prime minister in the Vichy government. As is usually the case for traitors, Petain suffered an inglorious end. After the end of the war in 1945, he was arrested, tried and sentenced to death. General de Gaulle gave him a pardon converting the death sentence to life imprisonment.

General Grivas was the leader of Eoka, the aim of which was ‘enosis and only enosis’ and not, as is misleadingly claimed by the naïve or by complex-ridden ‘freedom fighters’, a struggle for liberation. Those who know the history of Greece well would agree that when the enosis referendum was held (1950) or when the Eoka struggle began (1955), Cypriots under the British yoke enjoyed greater freedom than Greeks.

Despite the fact that Eoka did not achieve its objective, Grivas returned to Greece a national hero. Like Petain, Grivas wrecked his hero status by setting up Eoka B, a criminal organisation that murdered its ‘enemies’, blew up police stations, government buildings and the cars of its critics in order to achieve… enosis.

As the Greek philosopher Democritus said, “For fools, the teacher is not logic but calamity.” And what a calamity! It was a pity Grivas did not live another six months (he died in January 1974) to see for himself the big tragedy his country suffered after his ideological brothers attempted to achieve enosis.

Eight days ago, a seminar about Grivas was organised by the Council of Historical Memory Eoka 1955-50 and the Associations of Eoka Fighters to mark 120 years since his birth. I have not read the speeches made by the so-called historical analysts, but I would bet anything that they made no mention of the criminal Eoka B, established and led by their hero. Nor would they have mentioned the co-operation of his X organisation, during the German occupation of Greece, with the German security battalions. Using their well-known objectivity, the ‘historical analysts’ would undoubtedly have extolled, yet again, Grivas’ genius. It is a well-known fact that the extreme right adheres faithfully and irrevocably to its traditions.

This biographical deficiency that is the calculated suppression of important facets of someone’s life brings to mind the way Al Capone, the greatest gangster of the 20th century – brought to life by the unforgettable movie The Untouchables, starring Robert de Niro and Sean Connery – was remembered by ordinary people.  In the eyes of ordinary people Capone was a hero and a great philanthropist.

During the great depression in the US (1929-1933) unemployment had reached 25 per cent and Americans were starving. Capone whose wealth was estimated at $100 million (in 1930!) helped the poor like nobody else. Outside the restaurants he owned, there were endless queues of the poor waiting to be given food and coffee, while he also paid for the healthcare of impoverished patients. All the biographies of Al Capone, at least in the 1950s, praised his compassion and philanthropy without mentioning his crimes.

The same, of course, applies to Archbishop Makarios. I do not think there is a biography that accuses him of opportunism, poor judgement, of undermining the independence of Cyprus, or of formulating the Akritas Plan (with his associates) which aimed at exterminating the Turkish Cypriots. The mere mention of such facts is taboo for ‘serious’ analysts and historians.

The time is nigh for laying bare the people who led us to the current disaster. It is inconceivable that we honour them with commemorative seminars or by giving their names to our busiest avenues. No matter how many challenges to reaction are silenced, no matter how many protests are suppressed, the march of history cannot be stopped. Today they are small voices. Tomorrow they will be loud voices. And the day after tomorrow they will be shrieks.

A Turkish Cypriot president would be in office not in power

Juncker, the latest anti-hellene to try and impose a settlement