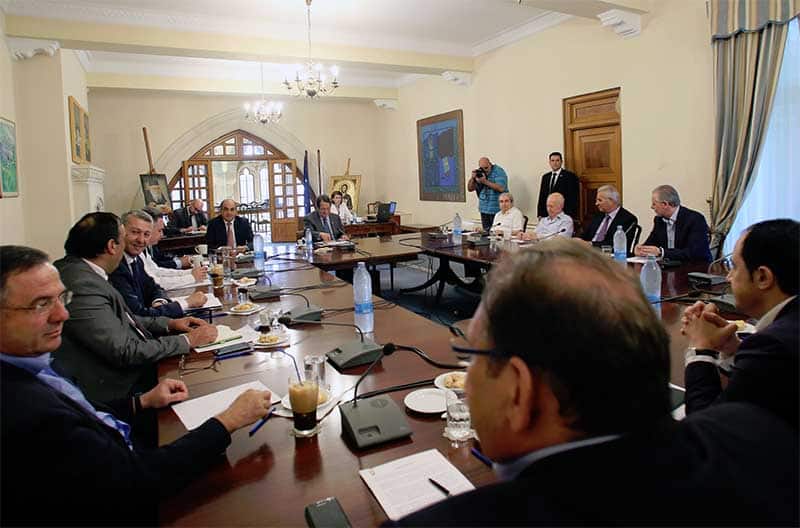 Party leaders have accepted the president’s invitation to accompany him to the second Conference on Cyprus, which will start next week in Switzerland, deputy government spokesman Victoras Papadopoulos said on Monday, following a National Council meeting.

President Nicos Anastasiades presided over the meeting of party leaders and former presidents ahead of the Conference on Cyprus at the Swiss resort of Crans-Montana that will reconvene on June 28 at the political level, under the auspices of the UN Secretary-General Antonio Guterres.

At the meeting Diko, Edek and the Solidarity Movement gave the president a joint text on their positions as regards security and guarantees. Diko leader Nicolas Papadopoulos said that they would announce the content of this document on Tuesday.

Head of the Citizens’ Alliance Giorgos Lillikas said that his party also submitted a proposal calling for the National Council to adopt a unanimous decision on the talks at Monday’s meeting, but that some members turned it down.

His proposal, he said, included a call for the National Council to convene before and after each negotiating session.

He also said that they suggested that the talks should not be linked to the Republic’s rights concerning its exclusive economic zone nor should the historical elements of the Cyprus issue be connected to its international aspects.

“Something like that would put us in an awkward position,” Lillikas said.

The deputy spokesman said that the president would take into consideration the parties’ proposals – “hence the invitation extended to them to accompany him to Switzerland”.

Edek’s leader Marinos Sizopoulos said that the settlement talks are at a critical phase, and that the president’s negotiating position should be reinforced. He called for unity “to shape a common national line and collective management of our national issue”.

Their proposal, he said, is aimed at reinforcing the effort. “But for this effort to bear fruit the president must remain stable in his positions”.

Akel leader Andros Kyprianou said that this is “perhaps the most decisive of all the meetings that have taken place in recent years” and that the Greek Cypriot side must go there prepared.

He also called for unity to reinforce the efforts of the president.

“We are not asking anyone to abandon their positions on the Cyprus issue. But let’s for once put Cyprus’ interests above those of the political parties,” Kyprianou said.

Disy head Averof Neophytou said that the Greek Cypriot side should be more flexible and be prepared for the possibility that Turkey might make concessions.

He added that the Greek Cypriot side went to the talks in February 2004 believing that Turkey would not accept arbitration, “but when (former Turkish Cypriot leader Rauf) Denktash read the document given to him by the (Turkish) foreign affairs ministry, the then president (Tassos Papadopoulos) and political leaders were left staring at each other”.

Neophytou was referring to reports that the Greek Cypriot side went to the talks in New York to discuss the UN reunification plan unprepared, believing that their interlocutors would never accept UN arbitration or set a deadline for a referendum. But Denktash did agree, and this forced Papadopoulos to play along, reportedly to avoid taking the blame for being the one to say no.

Anastasiades and his associates, Neophytou said, is prepared for all possible scenarios.

But for leader of the Solidarity Movement, Eleni Theocharous, this is a sign that the president is going to the talks prepared to “make more concessions to solve the Cyprus issue”.

“I am sorry but this seems to be the reality, and on the pretext that Turkey will make significant concessions, we will be led to a dead-end, without escape,” Theocharous said.

Political leaders reiterated the position that the presence of guarantees and intervention rights of other countries were unacceptable, and stressed that progress on the issue of security and guarantee was up to Turkey’s good will.

Spokesman Papadopoulos dismissed the statements made by the Greens’ leader Giorgos Perdikis on the president’s inconsistent stance on the country’s energy programme. The president, Perdikis said, who used to give reassurances that the drillings for natural gas off Cyprus would definitely take place, changed to “it is up to the (energy) companies”.

“The Republic’s energy plans will continue as is, without as much as an iota changed,” the spokesman said.

Turkish troops hold exercises in Qatar in show of support