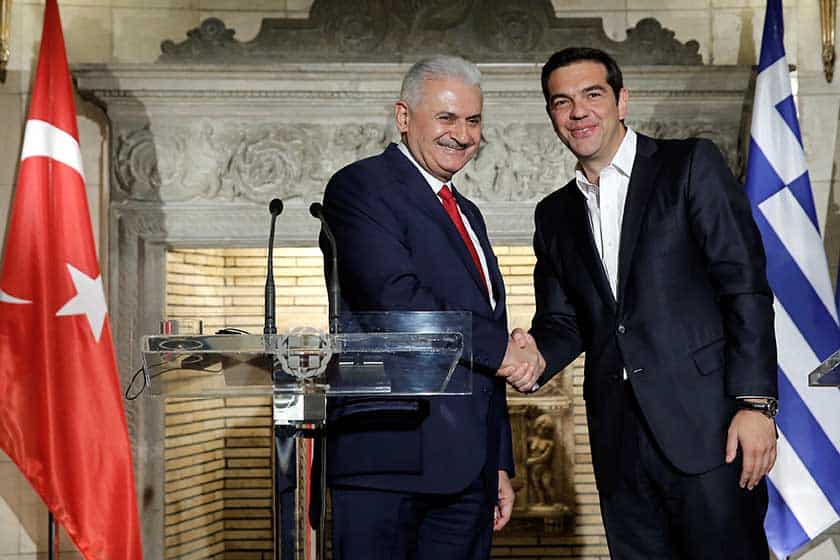 Turkey needs to contribute to a fair and viable solution to the Cyprus problem, especially in light of the current destabilisation of the region, Greek Premier Alexis Tsipras told his Turkish counterpart Binali Yildirim on Monday.

“The Mediterranean must remain a sea of peace,” Tsipras said, adding that there must be a “positive agenda” between the two countries, “without undermining action from either side”.

Yildirim, in Athens for a one-day working visit, replied that “in the Eastern Mediterranean we have the issue of the use of energy sources, which belong to humanity at large”.

The Greek premier said he described to his counterpart Athens’ view for “a solution to the Cyprus problem that will allow a reunited Cyprus to offer its citizens security in modern terms, without guarantees”.

He added that both agreed that a dialogue aiming to arrive at a final deal must be kept going.

“We should have an open communication channel, so that positive steps forward can be made in Switzerland,” Tsipras said.

The Turkish prime minister replied that the solution of the Cyprus problem must feature absolute fairness, so that “we can safeguard the present and future of both communities”.

Unnamed government sources cited by the Cyprus News Agency said that, during the talks, Yildirim insisted on the issue of the eight Turkish military officers who fled to Greece last year, following the failed coup against the Turkish government, and whose extradition to Turkey Greece later denied.

Yildirim, the sources said, went as far as linking the improvement of Greco-Turkish relations “at all levels” with the possible reversal of the non-extradition decision.

In his remarks, the Turkish premier said he hoped that “the coupists do not launch a coup against Greco-Turkish relations”, adding that “they must be returned”.

Pointing out that in Greece there is full separation between the judiciary and the executive branches of government, Tsipras said that justice is independent and “its decisions, whether we agree or not, are respected”.

Tsipras also brought up the issue of Turkish violations of Greece’s air-space and maritime boarders in the Eastern Aegean, with Yildirim countering that violations are done by both sides, and the effort to avoid tension must be mutual.

“We have agreed to encourage the military chiefs to be in open communication,” Tsipras said.

“It is preferable to prevent tension, rather than address it.”

To this, Yildirim added that the two countries’ differences “can and must be resolved based on the principle of mutual benefit”.

Russia to track US jets over Syria as potential targets