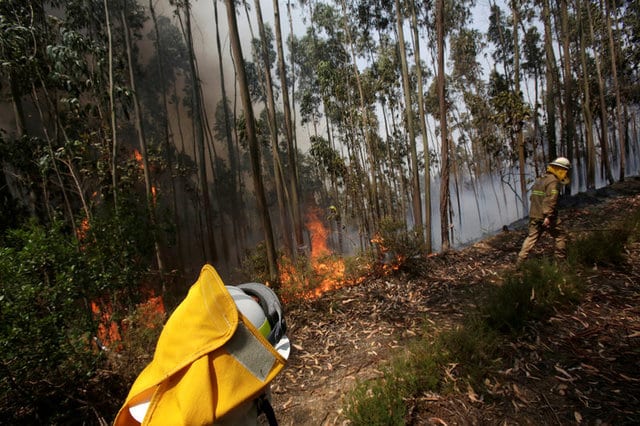 Firefighting workers look at a forest fire in Louriceira

Portugal carried out a massive operation to combat its deadliest forest fire on record, which has killed 64 people, amid confusion about the fate of a firefighting plane which had earlier been reported to have crashed on Tuesday.

Victor Vaz Pinto, commander of the civil protection agency, said a helicopter had been sent out to search for the aircraft but had found nothing.

“I have no information that any airplane working for civil protection has crashed,” said Vaz Pinto, adding that an explosion heard by many in the vicinity may have been caused by abandoned gas bottles.

Local media had earlier reported a Canadair plane had crashed.

A Reuters photographer in the area said he saw a plane fly out of view and shortly afterwards he heard an explosion.

The fire, about 200 km (125 miles) northeast of capital Lisbon, spread rapidly after starting on Saturday, killing many people in their cars as they tried to flee the blaze.

Costa called the fire the biggest human tragedy in Portugal in living memory.

Several other fires have now spread through the region and there are now more than 2,000 firefighters involved in the efforts, said Vaz Pinto.

He said one fire further north in the village of Gois was very worrying and several residents were evacuated as a precaution.

There have been reports and witness accounts about the slow response by the emergency services to the fire, prompting growing demands for an explanation.

“I am surprised not by the fact that people have died, which is tragic, but by the fact that this hasn’t happened earlier and more often,” wrote Paulo Fernandes, professor of forest sciences, in daily Publico. “Everything indicates there were mistakes.”

Costa asked authorities for a report on what went wrong.

“Why, for how long and what impact was there on the planning, command and execution of operations if your very systems were not working? What was done to establish alternative connections?” Costa asked of the emergency services, according to the state news agency Lusa.

Costa, who sought an explanation from the national civil protection agency, the weather institute and police, also asked why a road, where many people died in their cars, had not been closed off.

Data from the European Forest Fire Information System showed that an area of more than 30,000 hectares had been affected, making it the largest ever fire in Portugal.

The area burnt is nearly three times bigger than Lisbon and means the relatively small country accounts for more than a quarter of all fires in the entire European Union this year, the data showed.(https://ec.europa.eu/jrc/en/scientific-tool/current-situation-european-forest-fire-information-system)

The traditionally Catholic country holds its third day of mourning for the victims on Tuesday, after which demands for answers are likely to rise.

The main centre-right Social Democrats requested that a commission be created immediately to investigate the fires.

Assuncao Cristas, leader of the centre-right CDS-PP opposition party said the country was still in mourning, but after that “will come the time, in parliament, when all questions will be asked.”

Officials have said communications were knocked out in the initial fierce fires when most people died, affecting mobile and fixed telephone networks.