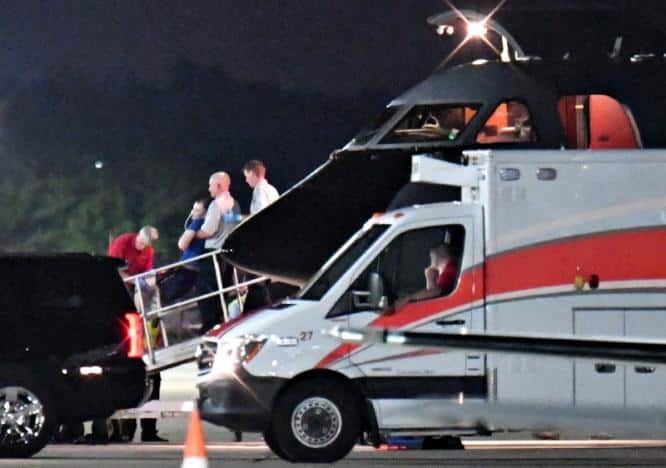 A person believed to be Otto Warmbier is transferred from a medical transport airplane to an awaiting ambulance at Lunken Airport in Cincinnati, Ohio

An American university student held prisoner in North Korea for 17 months died at a Cincinnati hospital on Monday, just days after he was released from captivity in a coma, his family said.

Otto Warmbier, 22, who was arrested in North Korea while visiting as a tourist, had been described by doctors caring for him last week as having extensive brain damage that left him in a state of “unresponsive wakefulness.”

“Unfortunately, the awful torturous mistreatment our son received at the hands of the North Koreans ensured that no other outcome was possible beyond the sad one we experienced today,” the family said in a statement after Warmbier’s death at 2:20 pm EDT (1820 GMT).

His family has said that Warmbier lapsed into a coma in March 2016, shortly after he was sentenced to 15 years of hard labor in North Korea.

Physicians at the University of Cincinnati Medical Center, where he died, said last Thursday that Warmbier showed no sign of understanding language or awareness of his surroundings, and had made no “purposeful movements or behaviours,” though he was breathing on his own.

There was no immediate word from Warmbier’s family on the cause of his death.

The circumstances of his detention in North Korea and what medical treatment he may have received there remained a mystery, but relatives have said his condition suggested that he had been physically abused by his captors.

The University of Virginia student and Ohio native was arrested, according to North Korean media, for trying to steal an item bearing a propaganda slogan.

North Korea released Warmbier last week and said he was being freed “on humanitarian grounds.”

The North Korean mission to the United Nations was not available for comment on Monday.

US President Donald Trump issued a statement offering condolences to the Warmbier family and denouncing “the brutality of the North Korean regime as we mourn its latest victim.”

The president drew criticism in May when he said he would be “honoured” to meet with NorthKorean leader Kim Jong Un.

“If it would be appropriate for me to meet with him, I would absolutely, I would be honored to do it,” Trump said in the interview. “If it’s under the, again, under the right circumstances. But I would do that.”

The student’s father, Fred Warmbier, said last week that his son had been “brutalized and terrorised by the Pyongyang government and that the family disbelieved North Korea‘s story that his son had fallen into a coma after contracting botulism and being given a sleeping pill.

Doctors who examined Otto Warmbier after his release said there was no sign of botulism in his system.

Warmbier was freed after the US State Department’s special envoy on North Korea, Joseph Yun, travelled to Pyongyang and demanded the student’s release on humanitarian grounds, capping a flurry of secret diplomatic contacts, a US official said last week.

Tensions between the United States and North Korea have been heightened by dozens of North Korean missile launches and two nuclear bomb tests since the beginning of last year in defiance of UN Security Council resolutions. Pyongyang has also vowed to develop a nuclear-tipped intercontinental ballistic missile capable of hitting the US mainland.

Korean-American missionary Kenneth Bae, who spent two years in North Korean captivity before his release in 2014, expressed sadness at Warmbier’s death, calling it an “outrage.”

“I cannot understand what the Warmbier family is feeling right now. But I mourn with them, and I pray for them,” Bae said in a statement, noting three Americans and a Canadian are currently detained in North Korea.

Young Pioneer Tours, the group with which Warmbier traveled to North Korea, will no longer be organizing tours for US citizens to the isolated country, Troy Collings, a company director, said in a statement.