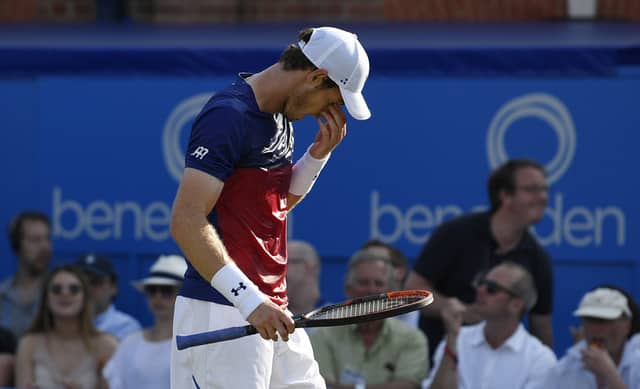 By far the biggest shock was number one seed Murray’s abject 7-6(4) 6-2 defeat to Australian world number 90 Jordan Thompson – a late call-up who only knew he was playing shortly before stepping on court against the defending champion.

Temperatures, which had reached 38 degrees on court during the day at the west London club, were still sizzling when Murray took to court for his first grasscourt match of the season, having reached the semi-finals of the French Open.

Initially he had been scheduled to face fellow Britain Aljaz Bedene but 23-year-old ‘lucky loser’ Thompson stepped in after Bedene withdrew with a wrist injury.

Murray had lost only one match on grass since the summer of 2014 – to Roger Federer in the 2015 Wimbledon semi-finals – but looked uncomfortable on the slick surface as the errors flowed from his racket, especially off the forehand.

Having taken a close first set Thompson, who reached the final of the Surbiton challenger event last week, raced through the second to the general surprise of the 10,000 crowd.

“Andy’s the world number one – I’ve looked up to him and that’s definitely the biggest win of my career. I took each point at a time. I didn’t expect it to be winning in straight sets,” he told the BBC.

“I was sitting around yesterday hoping to get a match. Here I am, I got in the draw and I was so lucky to be here. I don’t know if I can say my immediate thoughts.”

Murray looked flat and admitted it was a “big blow” in his build-up for Wimbledon where he will be aiming to defend the title he won for a second time last year.

“It has happened in the past where guys haven’t done well here and gone on to do well at Wimbledon,” said the Briton after the end of a 14-match winning streak on grass.

“There is no guarantee that I won’t do well at Wimbledon, but it certainly would have helped to have had more matches.

“He played better. I didn’t create loads of chances.”

After his defeat by Rafa Nadal in the Paris final, Wawrinka added Paul Annacone to his coaching team as a grass court specialist. The American previously coached Federer and Pete Sampras, who between them have taken 14 Wimbledon titles.

But Wawrinka was below his best on Tuesday as Lopez produced some deft touches to support his big serve.

“I came here with a lot of confidence and tennis is a lot about confidence,” Lopez told the BBC.

Raonic said he would spend time on the practice court and in the gym after his defeat by Kokkinakis.

It was the Australian’s first win over a top 10 player as he began the long road back from playing only one match in 2016.

“I’m trying to look forward now and get myself going week by week, and I can’t wait to play my next round.” (

Plant of the week: ‘herb of princely authority’