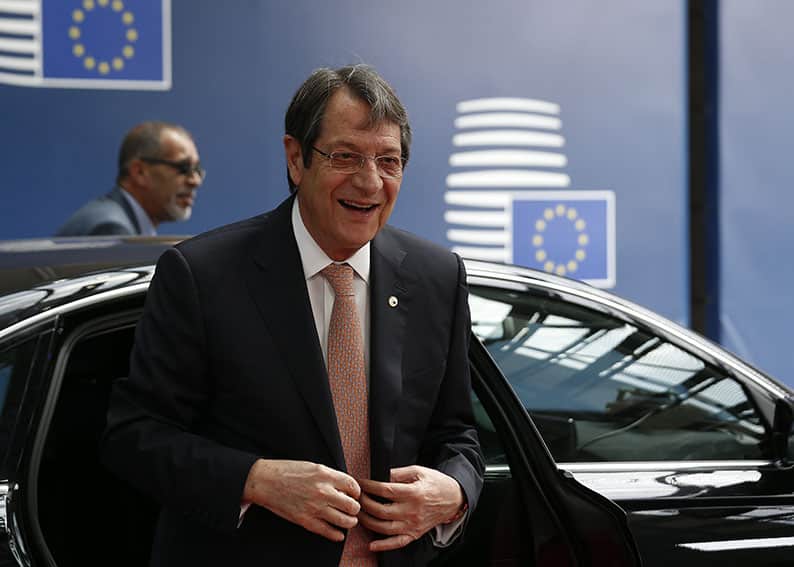 By Angelos Anastasiou and Elias Hazou

AS PRESIDENT Nicos Anastasiades met European leaders on Thursday in Brussels where the government said they backed the Republic’s positions on security and guarantees, the draft common document that will steer negotiations on the issues in Crans-Montana sparked more controversy as parties were briefed in Nicosia.

Government spokesman Nicos Christodoulides later told reporters that during the meetings the president brought his French and German counterparts up to date on the Cyprus reunification talks ahead of next week’s multilateral conference om Switzerland on June 28.

In both meetings, said Christodoulides, both foreign leaders conveyed to Anastasiades that they share Nicosia’s position that “in the year 2017, we cannot be talking about guarantees by third countries, or occupation troops staying on in an EU-member state.”

Christodoulides also revealed that on Monday foreign minister Ioannis Kasoulides is due in Paris, where he will be meeting with his French counterpart as well as with the Macron’s chief diplomatic advisor.

“There is increased interest in developments in the region, and it was agreed that these contacts with the French President and the German Chancellor continue in the near future,” the spokesman said.

“This document is named ‘common’, but common it is not,” Sizopoulos said, adding that it contained “very negative elements”.

“It was prepared by Eide, and our side is expected to submit its views. But what happens if our suggestions are not accepted? Does our side reject it? Does it attend the conference or not?” Sizopoulos said.

He also expressed concern that the conference’s agenda would include internal aspects of the Cyprus problem, “ostensibly as they relate to constitutional security”.

“One can easily identify the huge risks this process can pose, as it can lead to either additional concessions by our side or cause our side to reject them and be blamed for the breakdown,” he said.

“We have made recommendations to the negotiator. It is up to the President and his advisers to make use of them if they want.”

After being briefed by Mavroyiannis, Theocharous called the document a “façade for Turkish positions”.

“We saw the document but did not receive it,” she said. “Although it supposedly records the views of the Greek and Turkish Cypriot sides, and references the views of Greece, Turkey, and the United Kingdom, in reality it reflects the Turkish positions.”

Theocharous said Solidarity will be represented in the Greek Cypriot delegation in Crans-Montana by deputy chairman Polis Pallikaros.

“We intend to contribute through recommendations, arguments, concerns, and disagreements,” Pallikaros said. “But in order for this to happen, the president must brief us before his meetings. If Mr Anastasiades briefs us after the fact of what he has already done, there is no point in us being in Switzerland.”

Meanwhile, the Green party, which was briefed on the document on Wednesday afternoon, called for the removal of Eide’s proposal for an “implementation treaty”.

An agreed framework for the implementation of the solution had been a Greek Cypriot demand, and the Greens voiced strong objection to the proposed signing of such a treaty.

“Eide’s proposal calls for an ‘implementation agreement’ to be signed by the three guarantor countries and the ‘united republic of Cyprus’,” the party said. “If this proposal were to be accepted, the three guarantors’ role would be preserved, the Republic of Cyprus would be dissolved prior to the solution, and President Anastasiades’ position that implementation should be undertaken by international organisations would be scrapped.”

In contrast, ruling Disy vice-president Nicos Tornaritis said the document was moving “in the right direction”.

“But it remains a working paper,” he said. “Our side has always demanded a guarantee for the implementation of a solution. Let me remind that this was one of the main reasons our people rejected a UN peace plan.”

Tornaritis was referring to the 2004 peace plan, rejected in a referendum by 76 per cent of Greek Cypriots. Then President Tassos Papadopoulos, who had campaigned for a “resounding no”, had argued that there was no guarantee Turkey would meet its obligations under the plan’s provisions.

In the north, Turkish Cypriot leader Mustafa Akinci held a one-hour meeting with the leaders of the parties to discuss the upcoming conference and the UN’s common document.

Following the meet, Turkish Cypriot ‘prime minister’ Huseyin Ozgurgun was quoted as saying that unless “a serious development arises” he would not attend the conference.

Referring to the common document, Ozgurgun said it contained no clear-cut positions, and predicted that it would leave both sides unsatisfied.

Seminar hears how cervical cancer could be prevented

Trump says he did not record conversations with Comey