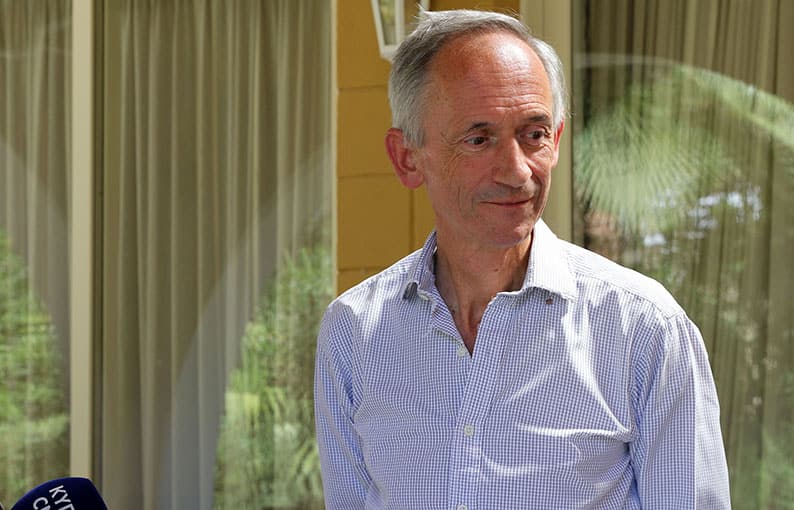 British High Commissioner Mathew Kidd said on Friday that next week’s Conference on Cyprus at Crans-Montana is a chance for big discussions and big progress to be made, noting his country is a junior participant in the discussion at the Conference.

The Swiss ski resort of Crans-Montana is just over two hours drive from Geneva, where the previous Conference on Cyprus was held in January this year.

Speaking to reporters ahead of the new Conference slated for June 28, Kidd, who was asked to comment on reports suggesting a ‘Treaty of Implementation’ would be under discussion, said: “I think it is a new concept that is worthy of serious discussion next week in Switzerland and that should help to identify whether it can be a useful part of the answer”.

However he underlined that it was an “an idea that it’s not yet cooked” but it is certainly worth trying to develop.
Asked about the initial draft of a common document on security and guarantees and whether London wished to make changes to the draft,

Kidd said: “I hope that the paper can be a guide to the discussion, sort of a structure for the discussion next week rather than becoming something which gets negotiated in detail in itself”.

On his expectations from Crans-Montana, Kidd added: “I hope we can make really good progress. I think it’s a moment in which the parties have all been preparing themselves for serious discussion. We have had time to reflect on the beginnings of the discussion in Switzerland in January and the timing is going to be there, the opportunity is going to be there, to take a really important step forward”.

To a question on whether this was the end of the road for Cyprus, the British diplomat said: “I think that’s a kind of an unhelpful way of thinking about it. It’s an opportunity, it’s not a threat. It’s a chance actually for big discussions, big progress to be made and all the right people will be there to get somewhere really important”.

As far as the UK role was concerned he said Britain would like to be a junior participant in the discussion.

Greece and Turkey will be represented at the conference by their respective foreign ministers, and Britain by an under-minister. The EU will be there as an observer. UN chief Antonio Guterres is due in Crans-Montana on June 30.

“The president of the Republic had a very interesting meeting with the British prime minister. The discussions were dominated by the upcoming conference on Cyprus. It was common belief that the results of the discussion of security and guarantees are those that will show whether we are optimistic about a positive outcome of this process,” he said.
Beyond that, there was also an exchange of views on Eide document, he added.  Christodoulides said that late Thursday, the written positions of the Greek Cypriot side on the content of the draft were sent to the UN.

He also said that during the EU Council meeting on Thursday night, the number of member states that agree with the position of the Republic that the EU is enough of a guarantee for a federal Cyprus, was in the double digits.