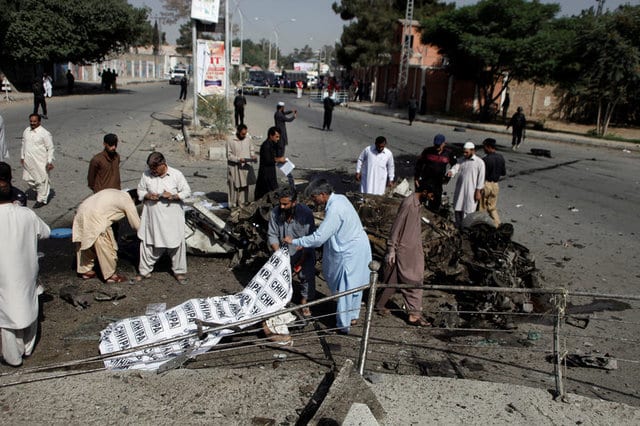 Seven police officers were killed in the first attack, in Quetta, which happened when police stopped the car to search it at a checkpoint.

Abdul Razzaq Cheema, director general of police in Baluchistan province, of which Quetta is capital, told Reuters the bomber had detonated a car packed with explosives.

At least 13 bodies were taken to hospital, along with 19 wounded people, said Wasim Baig, a spokesman for the Civil Hospital in Quetta. Nine security officials were among the wounded, said Fareed Sumalan, a doctor at the hospital.

Jamaat ur Ahrar, a splinter group of the Pakistani Taliban, claimed responsibility for the attack in a message sent to Reuters by its spokesman, Asad Mansur.

“Our attacks will continue until a true sharia system is enforced in Pakistan,” the spokesman said, referring to Islamic law.

In the evening, several hundreds kilometres to the northeast, two blasts went off in the town of Parachinar killing at least 15 people, a government official told Reuters.

The blasts were in a market and went off within three minutes of each other, senior government official Wazir Khan Wazir said. Parachinar is near the border with Afghanistan.

Many people were at the market buying food for iftar, the evening meal with which Muslims break the daily fast during the holy month of Ramadan. Ramadan ends this weekend.

No group claimed responsibility for the Parachinar blasts.

“It’s possible the IG office was the target, or the assailants were trying to enter the cantonment which is close by,” he said, referring to an army sector.

An official from Baluchistan’s bomb disposal unit said the car contained up to 95kg of explosives.

Television footage showed emergency workers rushing to the scene, which was strewn with debris, as security officials cordoned it off.

Quetta is about 100km east of the border with Afghanistan.

Resource-rich Baluchistan province has been plagued by violence for years. Separatist rebels are battling government forces while Taliban and other militant Islamist groups also operate there.

Baluchistan is also a main centre of Chinese-backed “Belt and Road” infrastructure and energy projects, worth $57 billion in Pakistan.

That attack prompted Pakistan to boost security for Chinese nationals and other foreigners in the province, which is already one of the most militarised regions in the country.

Tsipras warns of tension with Turkey if Cyprus talks fail