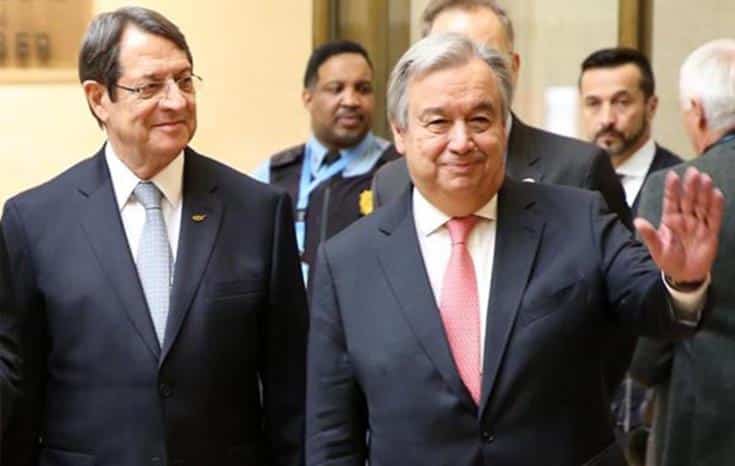 SPECULATION and reports as to the content of the text prepared by the United Nations that is to set the tone of the talks in Switzerland next week, and the amendments the Greek Cypriot side is proposing, continued on Friday after the government announced that it submitted its comments on Thursday night.

According to state broadcaster CyBC, one of the main issues that the government is proposing is an amendment concerning the implementation treaty, as it stipulates that it will be signed by the three guarantors – Greece, Turkey and the UK – and the reunited Cyprus.

If that report is accurate, the referrence to a reunited Cyprus could mean that the Republic of Cyprus will not be a signatory. The idea, CyBC said, is attributed to the UN.

Citing sources, the state broadcaster reported that the Greek Cypriot side has submitted to the UN a significant number of comments and suggestions.

“We have sent our observations expecting that they will be respected and accepted, based on the principle […] that the authors of this text are all participants, and that this is a common text,” director of the President’s office Michalis Sofocleous told CyBC.

The state broadcaster reported that the final text with the submissions of all five interested parties is expected to be ready by Monday.

The common document that President Nicos Anastasiades has made a condition to attend the Cyprus Conference at Crans-Montana, scheduled to start on Wednesday, was prepared by UN Special Advisor Espen Barth Eide and includes what was recorded at the meetings of technocrats, the positions of each side, as well as the proposal of the UN mainly with regard to the discussion of the chapter of security and guarantees. The final text, CyBC said, is to be ready by Monday.

The Conference on Cyprus will reconvene in the Swiss resort of Crans-Montana at the political level, under the auspices of the UN Secretary-General Antonio Guterres.

Attorney-general, Costas Clerides, it said, will be among the president’s advisors at Crans-Montana. On Wednesday, when the talks begin, also present will be the foreign ministers of Greece and Turkey, Nicos Kotzias and Mevlut Cavusoglu, and the British Minister of State for Foreign and Commonwealth Affairs Sir Alan Duncan, as Foreign Minister Boris Johnson has previous engagements. The EU which will participate as an observer, will be represented by the first vice-president of the European Commission, Frans Timmermans.

Neophytou calls for fund to compensate bondholders and depositors