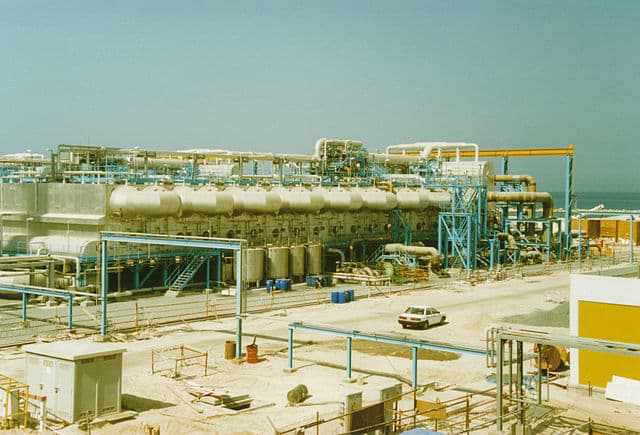 A desalination plant in Dubai

Will the oceans provide the answer to the world’s growing water crisis? When communities face droughts and growing populations, could seawater treatments prove to be sustainable methods to deliver an essential water supply to those who need it?

Freshwater is a limited but essential resource. Our renewable supply is rain and snow that falls over land. When these are abundant, our needs are met. But when conditions are dry, when drought comes, when populations grow, we struggle. Salt water, in contrast, is abundant, covering three-quarters of our planet, with half of humanity living within 200 kilometers of the ocean. So, can we find a sustainable solution in seawater?

To make seawater drinkable, the salt must be removed. Desalting, or desalination, began in antiquity. Seawater was simply boiled, the steam condensed and collected to make fresh water. This inefficient process needed a great deal of fuel for heating. The African-American engineer Norbert Rillieux revolutionized the process in the 1840s. He invented a multi-stage evaporation method that reuses heat, slashing fuel use and cost. Rillieux’s focus was on sugar refining, but this same technology is still used in many desalination plants.

Today’s most efficient desalination plants, however, pressurize seawater behind thin polymer sheets. Pure water passes through the sheets, leaving a saltier brine behind. This technology, which emerged about 50 years ago, is called reverse osmosis. Today, major cities around the world use reverse osmosis or multi-stage evaporation to provide fresh water to hundreds of millions of people. Dubai, Chennai, Perth, Antofagasta (Chile), Barcelona, Tianjin and San Diego are just a few cities where desalination provides some — and even all — of the water supply.

First, desalination still requires a lot of energy — three to four kilowatt-hours of electricity to make 1000 liters of freshwater using reverse osmosis. A city of one million people might need 300 million liters or more every day, demanding a 50-megawatt power plant just for desalination. Still more energy, and costly pipelines, are needed to move that water inland and uphill. This discourages the use of seawater desalination for most needs very far inland. Second, the brine left over from desalination is about twice as salty as the ocean into which it is discharged. And third, desalination is costlier than naturally occurring fresh water — if that’s available.

The energy needed for desalination has been falling for decades as engineers have drastically improved the systems. It’s possible that energy use may even be halved in the future. In fact, renewable energy can easily power reverse osmosis. Solar and wind power can meet this need in many parts of the world using technology that is already available. And renewable power can be added to the local grid to offset the desalination plant; Perth’s desalination project had wind power offsets, for example. Further, the cost of renewable power is becoming competitive with fossil energy: in both Chile and the United Arab Emirates, large PV projects have been bid at less than $0.03/kWh.

Does the desalination brine make the ocean saltier? The short answer is no.

The oceans, or even the Arabian Gulf alone, are vast compared to the brine flows created by surrounding desalination plants. The fresh water produced also eventually returns to the sea, so that the amounts of water and salt in the ocean are, overall, unchanged. But locally, in waters near the desalination plant, brine discharges can increase salinity. To prevent harm to marine life, civil engineers design mixing systems to dilute the brines. These mixing systems are often government regulated to ensure that the marine environment is protected. Similarly, the intakes for seawater must be carefully designed to avoid pulling in sea creatures.

Cost always governs the choice of a water source. Desalinated water often costs $0.50 to $2.00 per 1000 liters, depending on project financing and planning specifics. Large-scale desalination plants — those servicing large metropolitan cities — cost hundreds of millions of dollars. Before such major investment is made, other options will always be considered. Conserving water is usually an inexpensive starting point before even thinking of building a new water system. Fixing leaks is another first step: it’s not unusual for a water distribution system to leak 30 percent of its water, or more. Storm water can also be captured to help recharge supplies, and wastewater reuse and recycling can provide cost-effective fresh water for many purposes. Desalination makes sense only when no cheaper and reliable alternative can be found.

Desalination has other benefits beyond treating and delivering the daily water supply. Desalination plants are also drought resistant. They can provide backup when other freshwater sources run dry. California, for instance, could not overcome its recent drought with its huge aqueduct system because the drought affected the whole region. Desalination plants don’t compete with farms, forests or other towns for fresh water. Aqueducts, in contrast, take water from one location in order to supply another: in California, Owens Valley infamously lost its water to Los Angeles.

Major coastal cities are continuing to grow rapidly. Many are straining their natural freshwater resources. In these places, desalination’s role will continue to expand. Current and future desalination technologies can safely and sustainably make the oceans part of the solution to the world’s rising need for fresh water. John H. Lienhard V is the Abdul Latif Jameel Professor of Water and the Founding Director of the Abdul Latif Jameel World Water and Food Security Lab at the Massachusetts Institute of Technology. During three decades on the MIT faculty, Lienhard’s research and educational efforts have focused on water purification and desalination, heat and mass transfer, and thermodynamics. He has worked on the energy efficiency of desalination technology for many years.

US warship stayed on deadly collision course ‘despite warning’