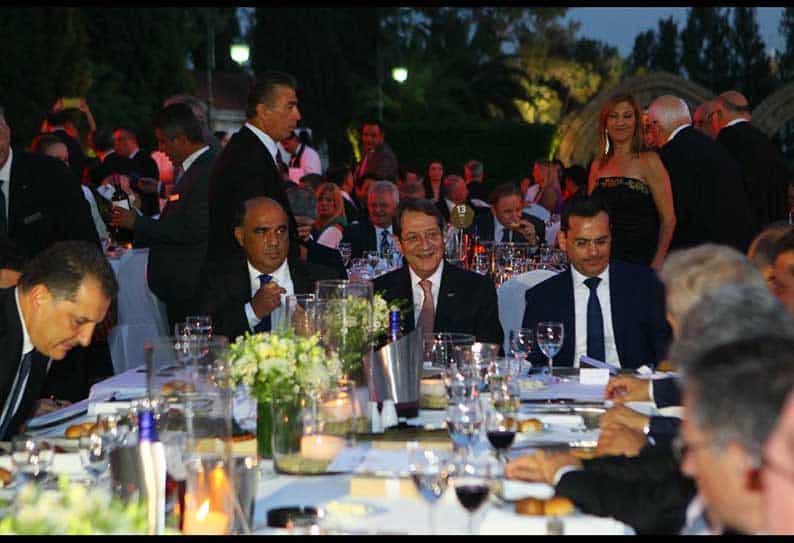 Foreign investments are the safest and most rational means for Cyprus to achieve economic stability and viable growth, President Nicos Anastasiades said on Monday during the International Investment Awards ceremony held at the presidential palace.

The awards were organised for the sixth year running by Cipa (Cyprus Investment and Promotion Agency).

Anastasiades told guests that following the tumultuous economic troubles during the banking crisis, efforts from both the private and public sector have resulted in an economy that “has achieved a strong and sustainable recovery”.

“A new approach has been adopted which sees foreign investments as the safest and most rational means to achieve economic stability and viable growth. Through foreign investment, Cyprus not only safeguards its competitive advantages, but it utilises them in the most effective way.”

Although it has still not reached its full potential, Cyprus is on the right track Anastasiades said however the country must “maintain discipline and reform momentum”.

Through the continuation of these efforts “we shall succeed in making Cyprus a world class destination for business and investment,” he added.

Panos Panayi, corporate vice president for Surface Computing at Microsoft Corp received an honourary award for his contribution in the field of technology and innovation.

During his speech, Anastasiades boasted new investment opportunities on the island including the marinas, sea-ports and the casino resort set to be built in Limassol.

“We have promoted significant reforms in the welfare system, the health care system, the management of public finances, in tax administration and, very importantly, in the banking sector.”

The island’s competitive tax regime and incentives for business and investments are reaping results, he added, highlighting investor demand for an €850 million, seven-year bond with an interest rate of 2.75 per cent is at its highest since Cyprus’ return to the international bond markets three years ago.

“This is the best confirmation of the restoration of investor confidence towards our country.”

Additionally, Anastasiades said Cyprus is now one of the fastest growing economies of the EU, currently with a GDP growth rate above three per cent and employment levels are on the rise, with a 3.4 per cent increase, compared to 2016.

“Our banking sector now stands on a much healthier footing, having undergone ambitious restructuring, while the restructuring of nonperforming loans has gained momentum.”

Cipa’s chairman Christodoulos Angastiniotis said Cyprus has a bright future ahead of it, adding that a 9.1 per cent increase in foreign direct investment in 2016 compared to the previous year was impressive for a country like Cyprus.

“Cipa is exerting every possible effort to carry out its mission, operating as a bridge of communication between the public and private sector, utilising the rich knowledge of the country and serving the needs of investors,” Angastiniotis said.

The 3.3 per cent growth rate is just one of the indisputable examples of Cyprus’ success story, h added.

Main sponsor for the awards was PwC Cyprus while the gold sponsor was Eurobank Cyprus. Silver sponsors were TFI Markets and Chivas Regal Extra.

Our View: Harsher penalties needed for those who start scrub fires

Russia’s ties to Turkey do not affect its stance on Cyprob, says ambassador