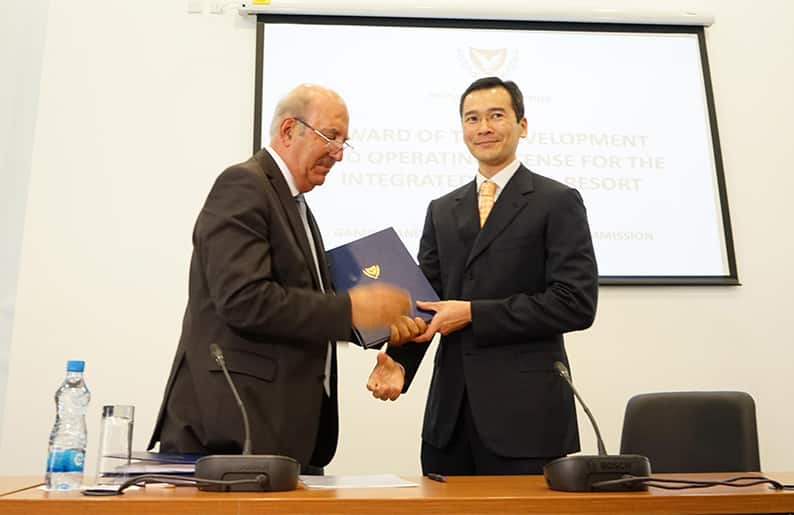 President of the National Gaming Authority Christos Mavrellis (left) and Andy Choy, chief gaming officer, of the consortium of Melco International Development Ltd after signing the contract on Monday

The contract for Cyprus’ first integrated casino resort, the only one of its kind in Europe, was signed on Monday in Nicosia between the gaming authority and the Melco Hard Rock consortium and is designed to provide for an investment of €500m, attract an extra 300,000 tourists a year, and to add 4,000 jobs.

The contract was signed at the Filoxenia Conference Centre between the president of the National Gaming Authority and Andy Choy, chief gaming officer, of the consortium of Melco International Development Ltd, Seminole HR Holdings LLC (Melco Hard Rock) and CNS Group (Cyprus Phassouri Zakaki Ltd).
Energy, Commerce and Tourism Minister Yiorkos Lakkotrypis, who addressed the event, touted the fact that the Limassol complex would be the only integrated casino resort in Europe, which will be based in Limassol, and will include four satellite casinos in Nicosia, Larnaca, Famagusta and Paphos.

The main resort will also be the largest casino in Europe, the minister said with 136 gaming tables, 1,200 gaming machines, a luxury hotel with 500 rooms with the capacity for expansion, a conference hall spanning 6,000 square metres that can accommodate audiences of 1,500, and a wellness centre covering 4,000 square metres.

“Total investment is expected to exceed half a billion euros and is estimated to create more than 4,000 jobs during the construction phase and the same number during operation,” Lakkotrypis said.
“This is undoubtedly, a project that will enrich our tourism product, attracting an additional 300,000 tourists annually and contributing significantly to combating seasonality,” he added.

The casino licence allows for the operation of an integrated casino resort in Cyprus for 30 years, as a monopoly for the first 15. Finance Minister Harris Georgiades said earlier this year that the casinos would bring in €100m a year in taxes.

The satellite casino in Nicosia is estimated to be up and running this year, and a temporary casino in Limassol – until the full-blown casino resort is ready. This will likely be located at the current premises of the Monte Caputo nightspot on Amathus Avenue. Construction on the resort – which will include a luxury hotel and theme parks – is expected to be completed by late 2019 or early 2020.

Lakkotrypis said that due to its size and importance, the casino was probably the most important project Cyprus has seen in decades.

He also said it was important that part of the government’s vision was that the casino would operate in a controlled manner so that vulnerable groups would be protected.

The previous government under Demetris Christofias had vowed to never allow a casino for social reasons but the financial crisis in 2013 prompted the current government to see it as a way to attract investment. Lakkotrypis said the age restriction has been set at 21.

“Our goal is the improvement of incoming tourism, increasing arrivals, and average spending per capita, and also to see this contribute to the ongoing efforts to address the problem of seasonality in the Cypriot tourism industry,” he said.

“Our other strategic objective was the creation of new jobs and additional tax revenue, supporting sectors that will be associated with the casino, and attracting further foreign investment.”

The casino operations will be overseen by the six-member National Gaming Authority, set up only five months ago, headed by Christos Mavrellis who said during the signing ceremony that its mission would be among other duties, to make sure the operation did not fall under criminal influence or exploitation.

The body will also make sure the games in the casino are conducted honestly, to make sure the operator complies with the terms of the licence and to monitor any negative social consequences.

“We shall exercise our authority and perform our duties and responsibilities in good faith always aiming at making this ambitious project a success,” he said.