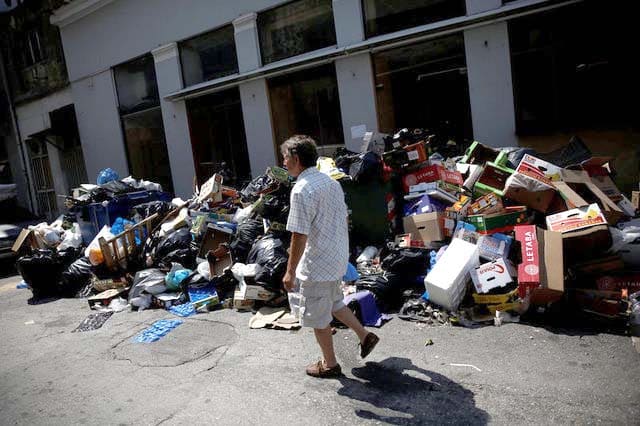 A man walks past a pile of garbage in Piraeus, near Athens, Greece June 26, 2017

Sacks of rubbish and rotting vegetables piled high on the pavements of Athens’ port of Piraeus on Monday – signs of a mounting labour dispute fast turning into a public health crisis.

Pensioner Fotini Papadaki held her nose as she added her own small bag to the mounds. “It’s deplorable, I understand job worries but taking it out on society … is going too far,” she said.

Around her, early morning commuters dodged past the reeking sacks as trash collectors and other municipal workers entered the second week of their walkout.

The strikers fear job losses as Greece wrestles with its seventh year of austerity demanded by international creditors. More specifically, the workers want better terms for short-term staff threatened, they say, by a court order banning extensions to their contracts.

Many residents, battered by the same spending cuts, were sympathetic at the start. But that support has come under strain as the rubbish bags pile up in the baking summer sun.

Across the capital and other cities, residents have reported growing numbers of insects, rats, stray cats and dogs, all of them carriers of infection.

Authorities have asked people to keep their trash at home, though for flat-dwellers like Fotini Papadaki, there is only so much room on their balconies.

Some municipalities, including Thessaloniki in the north, have turned to the private sector to alleviate the situation, outsourcing rubbish removal.

It remains to be seen how long their strained budgets can take the extra cost. And the strikers are showing no signs of backing down.

“We will step up labour action unless the government accepts our demands,” said Nikos Trakas, head of municipal workers labour union POE-OTA.

Greek socialist party leader dies at 57 after battle with cancer