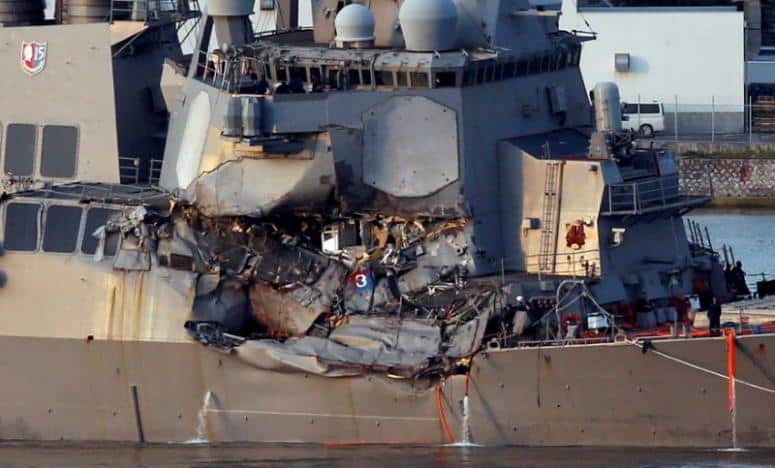 The Arleigh Burke-class guided-missile destroyer USS Fitzgerald, damaged by colliding with a Philippine-flagged merchant vessel, is towed into the U.S. naval base in Yokosuka, south of Tokyo, Japan June 17, 2017

A US warship struck by a container vessel in Japanese waters failed to respond to warning signals or take evasive action before a collision that killed seven of its crew, according to a report of the incident by the Philippine cargo ship’s captain.

Multiple US and Japanese investigations are under way into how the guided missile destroyer USS Fitzgerald and the much larger ACX Crystal container ship collided in clear weather south of Tokyo Bay in the early hours of June 17.

In the first detailed account from one of those directly involved, the cargo ship’s captain said the ACX Crystal had signalled with flashing lights after the Fitzgerald “suddenly” steamed on to a course to cross its path.

The container ship steered hard to starboard (right) to avoid the warship, but hit the Fitzgerald 10 minutes later at 1:30 am, according to a copy of Captain Ronald Advincula’s report to Japanese ship owner Dainichi Investment Corporation that was seen by Reuters.

The collision tore a gash below the Fitzgerald’s waterline, killing seven sailors in what was the greatest loss of life on a US Navy vessel since the USS Cole was bombed in Yemen’s Aden harbour in 2000.

Those who died were in their berthing compartments, while the Fitzgerald’s commander was injured in his cabin, suggesting that no alarm warning of an imminent collision was sounded.

A spokesman for the US Navy’s Seventh Fleet in Yokosuka, the Fitzgerald’s home port, said he was unable to comment on an ongoing investigation.

The incident has spurred six investigations, including two internal hearings by the US Navy and a probe by the United States Coast Guard (USCG) on behalf of the National Transportation Safety Board. The Japan Transport Safety Board, the JCG and the Philippines government are also conducting separate investigations.

Spokesmen from the Japan Coast Guard (JCG), US Coast Guard and ship owner, Dainichi Invest, also declined to comment. Reuters was not able to contact Advincula, who was no longer in Japan.

The investigations will examine witness testimony and electronic data to determine how a naval destroyer fitted with sophisticated radar could be struck by a vessel more than three times its size.

Another focus of the probes has been the length of time it took the ACX Crystal to report the collision. The JCG says it was first notified at 2:25 am, nearly an hour after the accident.

In his report, the ACX Crystal’s captain said there was “confusion” on his ship’s bridge, and that it turned around and returned to the collision site after continuing for 6 nautical miles (11 km).

Shipping data in Thomson Reuters Eikon shows that the ACX Crystal, chartered by Japan’s Nippon Yusen KK, made a complete U-turn between 12:58 am and 2:46 am.

Can the oceans solve water scarcity?