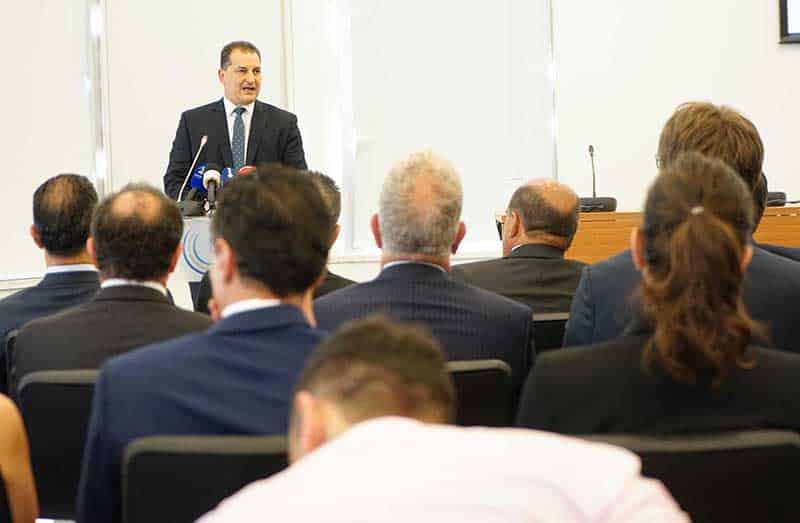 The creation of an integrated casino resort on the island is expected to boost state revenues in addition to creating thousands of jobs and attracting hundreds of thousands of tourists every year, commerce minister Giorgos Lakkotrypis said on Tuesday.

He was speaking a day after the signing of a licence to develop and operate the casino resort – including four satellite casinos – between the gaming authority and the Melco Hard Rock consortium.

“There was always the risk, for whatever reason, of not attracting interest [in the project],” Lakkotrypis told the state broadcaster.

“From the outset we set ambitious objectives, and in retrospect it appears that it was the right move,” he added.

The minister said the signing of the agreement on Monday was the outcome of a long process lasting years.

The government expects an initial investment of some €500 million, with the consortium having the option of expanding the casino resort in Limassol at a later date.

But even more important than the scope of the investment, Lakkotrypis stressed, is that the casinos will diversify Cyprus’ tourist product, attracting thousands of tourists to the island year-round.

As for the punters, the target markets are all markets which are up to four hours flight from Cyprus, Lakkotrypis said.

In addition to the complex in Limassol, the consortium will build and operate four satellite casinos in Nicosia, Larnaca, Famagusta and Paphos.

According to reports, the satellite casino in Nicosia is estimated to be up and running this year, while a temporary casino will be built in Limassol – until the full-blown resort is ready.

The main resort will also be the largest casino in Europe with 136 gaming tables, 1,200 gaming machines, a luxury hotel with 500 rooms with the capacity for expansion, a conference hall spanning 6,000 square metres that can accommodate audiences of 1,500, and a wellness centre covering 4,000 square metres.

The casino licence is valid overall for 30 years, while for the first 15 years it will be an exclusive concession.

After the first 15 years, Lakkotrypis said, the state would decide whether to grant one or more licences to other operators, ending Melco’s monopoly.

On Tuesday the minister was scheduled to meet with representatives of Melco to discuss a timetable for the opening of the temporary casino in Limassol and for the satellite casinos.

“The clock on the exclusive licence started ticking as of yesterday [Monday], so it is in the consortium’s interest to start operations as fast as possible,” Lakkotrypis said.

‘Giant leaps’ need to be made in Switzerland (updated)