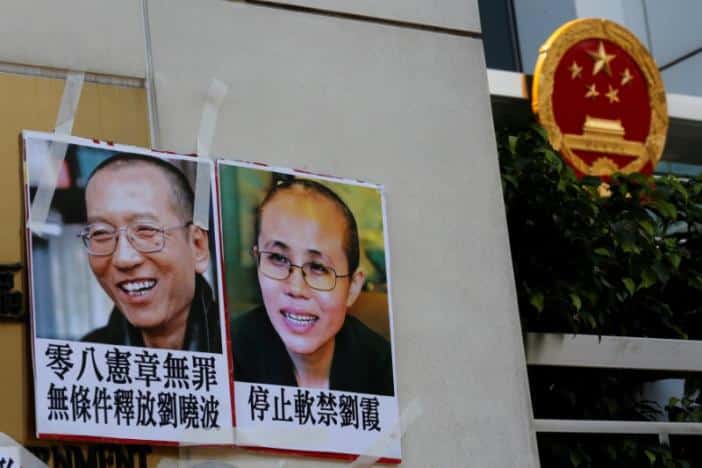 Nobel Peace Prize-winning activist Liu Xiaobo’s liver cancer can not be treated with surgery, chemotherapy or radiotherapy, Liu‘s wife said, as questions increased among his supporters over his treatment by the Chinese authorities.

Liu, 61, was jailed for 11 years in 2009 for “inciting subversion of state power” after he helped write a petition known as ‘Charter 08’ calling for sweeping political reforms.

In December 2010, Liu was awarded the Nobel Peace Prize for his activism in promoting human rights in China, which responded by freezing diplomatic ties with Norway. They normalised ties in December last year.

Liu is being treated in a hospital in the northern city of Shenyang for late-stage liver cancer, having been granted medical parole, his lawyer told Reuters on Monday.

A video of Liu‘s wife, Liu Xia, who has been under effective house arrest since her husband won the Nobel Peace Prize, crying and talking about her husband’s condition was shared online late on Monday.

A source close to the family confirmed the authenticity of the video and said Liu was being treated using targeted therapy.

“They say his cancer has already spread too far for other treatments, but because we cannot meet the doctors treating him, we have no way to tell if this is true,” he said.

Liu and his wife wanted to return to Beijing for treatment but the authorities rejected their request, the source said.

The prison bureau of Liaoning province said on Monday that Liu was being treated by eight “well-known tumour experts”, but Western politicians and rights activists have voiced concern about the quality of treatment.

The United States called for his release.

“We call on the Chinese authorities to not only release Mr. Liu, but also to allow his wife, Ms Liu Xia, out of house arrest,” said Mary Beth Polley, a spokeswoman for the U.S. Embassy in Beijing, said.

The embassy called on China to “provide them the protections and freedoms, such as freedom of movement and access to medical care of his choosing, to which they are entitled under China’s constitution and legal system, and international commitments”, Polley said.

U.S. Senator Marco Rubio, co-chair of the Congressional-Executive Commission on China, said in a statement on Monday that despite news of Liu‘s release from prison for treatment, “serious questions remain”.

Chinese foreign ministry spokesman Lu Kang, responding to a question about Liu, said the issue was an internal affair.

“We have said many times that no country has the right to gesticulate about China’s internal affairs,” Lu told a regular briefing.

Asked whether China would consider allowing Liu to go abroad for treatment, Lu said: “All other countries should respect China’s judicial independence and sovereignty and should not use any so-called individual case to interfere in China’s internal affairs.”

Wang Qiaoling, the activist wife of rights lawyers Li Heping, likened Liu‘s case to that of her husband and dozens of other lawyers detained in Beijing’s most recent clampdown on dissent, who say they suffer illnesses due to mistreatment.

Wang said some of those detained in the crackdown, which began on July 9, 2015, had “met with high blood pressure”.

“We suspect Mr Liu Xiaobo ‘met with liver cancer’, and call for an independent third-party medical organisation to be involved,” she said on Twitter.

China has in the past acknowledged problems of mistreatment in the criminal justice system and has repeatedly vowed to crack down to address them.

In Hong Kong, about 70 supporters of Liu took to the streets to demand his immediate release, chanting slogans denouncing the Chinese government as a “murderer”.

The protesters, including prominent democracy activists Martin Lee and Joshua Wong, gathered outside Beijing’s main representative office in Hong Kong, the Central Liaison Office, and plastered pictures of Liu on its gates and held up banners.

“We should not be indifferent towards such blatant unfairness,” Wong said of Liu‘s plight.

No interim agreement on the cards