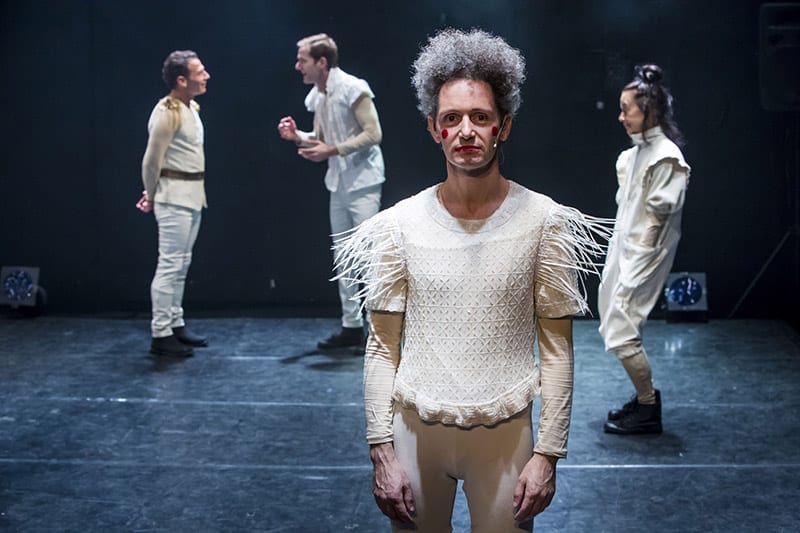 Summer is a time of festivals. Many are mainstream get-togethers which have been around for years (the Limassol Wine Festival and the Agros Rose Festival); some are light-hearted and self-explanatory (the Nicosia Beer Festival, the Ayia Napa Mediaeval Festival), several capitalise on our island’s burgeoning alternative scene (Comic Con, the Afro Banana Republic) and a fair few are dedicated to the arts (Pharos Chamber Music Festival, Contemporary Dance Festival). We have festivals of mind, body and spirit; of food and film and photography; of lavender and olive oil and carobs. And even if you’re the most stay-at-home of crowd-averse introverts, there’s bound to be at least one festival this summer which you’re thinking about – just considering, mind you! – attending. And I do hope it’s this… The International Festival of Ancient Greek Drama is all things to all people: light-hearted and amusing in places, solemn and sombre in others. Tragedy, comedy and satire – the three main genres of this ageless Hellenic art form – go hand in hand in a month-long celebration of the theatre which pays homage to the value of the spoken word. “To Greeks the spoken word was a living thing and infinitely preferable to the dead symbols of a written language,” oral historians Bahn and Bahn have suggested, while Socrates himself believed that once something was written down, it lost its ability for change and growth. And if you pause for thought, it’s this oral reinterpretation of the greatest plays ever written which makes the current festival so unique. Because this year’s plays – five in total – are as varied in their interpretation as are the groups who perform them and the audiences who flock to the theatres.

“This is a diverse programme, focusing on the priority for quality rather than quantity, highlighting the multicultural dimension of the festival,” organisers emphasise. “The theatre companies that participate in the festival’s programme come from different countries. Most of them come from European countries such as Greece, the UK, Germany, Italy, Belgium, Portugal, Spain, Romania, Bulgaria, Slovenia, Croatia, and Sweden as well as Cyprus. However, there has been participation from the USA, Russia, Korea, China and Israel as well. The performances, many of which are original in their approach, project the uniqueness of ancient Greek drama but also bear an intense colouring of the culture of the country from which they come…”

Twenty years ago, when the festival began, it’s remit was simple: to give ancient Greek drama a wider presence in the theatrical activities of the island, thus contributing to the building of theatrical sensibility among the people by offering them entertainment of a multi-cultural nature and high aesthetic standards. And today, say organisers, this objective has been achieved. “Each year the festival grows, acquiring its own multicultural character by hosting theatre groups coming from different cultural backgrounds, and it is now widely acknowledged as one of the most important cultural institutions of our island. During the last years, the festival has developed significantly: it has broadened its scope, providing space for the embracement of innovation through classical works, as well as the promotion of contemporary creation through staging ancient plays. It has also expanded its audiences, local and foreign, by presenting performances with English and Greek surtitles. And it has given the broader part of society access to artistic creation and stimulated local creativity while opening up a constructive dialogue with other cultures.”

Co-organised by the Cultural Services of the Ministry of Education and Culture, the Cyprus Centre of the International Theatre Institute and the Cyprus Tourism Organisation, this festival really is one the biggest and best on the island: since 2014 all its performances have been included in the official events programme of the European Capital of Culture Pafos2017, and it has twice been honoured with the EFFE Label, proclaiming it one of Europe’s finest festivals. And this year audiences can expect even more – five stunning plays in three wonderfully fitting locations: the Paphos Ancient Odeon (which dates back to the second century AD and is registered on the Unesco World Heritage List); the amphitheatre at Ancient Curium (originally built in the second century BC, though the current construction dates from the Roman period of the second and third centuries AD); and the Skali Amphitheatre in Nicosia (the youngest of the trio by a couple of millennia), which will see the opening performance…

Running from July 2 to 28, the festival begins with a performance of Sophocles’ Electra (July 2 at Skali, July 4 at Curium, and July 10 at the Ancient Odeon) by the local Satiriko Theatre, directed by Neoklis Neokleous. This contemporary take on the original tragedy sees interference from “neither the Gods nor Erynies; rather, it is the audience who become the only judge of the two siblings.” On July 7 (Curium) and July 9 (Skali) the Mikhail Chekhov Riga Russian Theatre presents Euripides’ Medea, directed by Vladislav Nastavšev, one of Latvia’s most prominent directors and composers. Aeschylus’ political tragedy, Seven Against Thebes, directed by the renowned Lithuanian director Cezaris Graužinis and translated by the Greek poet Yorgos Blanas will be performed at Curium on July 12 and 13, while local group Theatro Dentro will be taking part in the festival for the first time, with a rendition of Sophocles’ Oedipus the King – directed by Andy Papadimitriou – on July 16 (Skali), July 21 (Paphos Ancient Odeon) and July 23 (Curium). Concluding the richly diverse programme (July 26 at the Ancient Odeon, and July 28 at Skali), award-winning Israeli director Yair Sherman will present Euripides’ Bacchae in what is billed as “a contemporary reading of the play; an exciting directing approach and a highly aesthetic artistic result.”

In short, the 21st International Festival of Ancient Greek Drama boasts something from – and for! – everyone. In a summer of festivals, it’s probably the most unmissable event on the island: a very modern interpretation of five plays which have truly stood the test of time.

The 21st International Festival of Ancient Greek Drama
In Paphos, Limassol and Nicosia from July 2 to 28. For more information, the full programme of events, and where to buy tickets call 7000 2414 or visit www.greekdramafest.com Tickets cost €10 (€5 for students, senior citizens, National Guard, citizens with unemployment benefit / free admission to those with disabilities). All performances start at 9pm; audiences are advised to arrive by 8.45pm latest